Mitchell Stephens
Position: Center
Shoots: Right
Height/Weight: 5’11, 188 lbs
Born: February 5, 1997, Peterborough, ON
Central Scouting Rankings (Prelim/Mid/Final): ”B“/ 113th NA/ 112th NA
Summary: Massive off-the-board pick considering what the player actually brings to the table and what was available. Stephens is a quick center/wing who had an up-and-down year like most of his Saginaw teammates but finished strong. It wouldn’t be an understatement to say he benefitted the most from Matt Barzal’s razzle dazzle at the U18’s, netting 10 points in seven games. And though Stephens can play both center and wing, he’s much better at being on the tail end of plays rather than being expected to create them. He has top-six potential as a 25/50 kind of contributor, but he lacks in high-percentage shot selection and overall consistent creativity. Normally you don’t mind a kid who scores goals the hard way, but in a draft loaded with elite game-breakers as deep as the third round, we will tell you right now he should not be considered one of the top-25 forwards available for this draft. Then again, they drafted a skill guy like Dennis Yan a full lower than anticipated so maybe it evens out in the end.

Matthew Spencer
Position: Defenseman
Shoots: Right
Height/Weight: 6’2, 203 lbs
Born: March 24, 1997, Guelph, ON
Central Scouting Rankings (Prelim/Mid/Final): ”B“/ 113th NA/ 112th NA
Summary: Swift-skating yet intimidating blueliner who could be much higher if he was just a bit more patient with the puck and made better decisions in coverage. Nevertheless, at 6’2 and with speed from the back end, he’s still a solid prospect. Spencer worked his way up to become the Petes top-pairing go-to blueliner in what eventually became a lost season thanks to a sputtering offense. Spencer was by no means a man on an island; he doesn’t play a mistake-free game and while you appreciate the physicality, he takes himself out of position by either trying to deliver a wallop or vacating his slot coverage to chase around. Still, you like the potential even though he hasn’t lived up to the lofty expectations bestowed upon him when the Petes picked him third overall in the OHL Priority Selection. 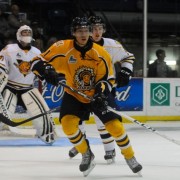 Dennis Yan
Position: Left Wing
Shoots: Left
Height/Weight: 6’1, 184 lbs
Born: April 14, 1997, Portland, OR
Central Scouting Rankings (Prelim/Mid/Final): ”C“/ 35th NA / 30th NA
Summary: Yan is an bonafide skilled forward who is one of the 2015 crop’s best pure goal scorers. He does not necessarily play the cliche’d “North American game”; he’s a speedy finesse winger with a world class wrist shot who thinks offense first. The benefits of playing here seem to relate more towards the maturity and humility inherent in most migratory young players who are thrust into different learning environments. Nevertheless, acutely watching him reveals an offensive talent who can think the game and not let many things distract him. While his wrist shot and IQ are his most noticeable attributes, he is a highly-reliable and inventive attacking player during 3-on-2’s and the undervalued (and oft-butchered) 2-on-2 situation — give him enough room and he’ll wire a wrist shot through a screen while cutting against the grain. He’s not a dump-and-chase player although he can be highly effective on the forecheck, and when he gathers the puck, he’s shown to thread the needle through some tight spaces. Yan’s compete level is can reach a crescendo but then really crash down to the point of disinterest. All accounts indicate, however, that he does like to compete and has a strong desire to improve every aspect of his game, not only making him coachable, but worthy of larger responsibilities down the road.

Anthony Cirelli
Position: Center
Shoots: Left
Height/Weight: 6’0, 160 lbs
Born: July 15, 1997, Etobicoke, ON
Central Scouting Rankings (Prelim/Mid/Final): NR/ 88th NA/ 67th NA
Summary: Memorial Cup hero who had an excellent second half to his season despite being buried behind Oshawa’s ridiculous scoring depth. Cirelli is a lanky kid who is a very smart center, blessed with great vision and he can finish off the rush. A late birthday who had to battle hard to earn a spot on a loaded roater, Cirelli tied for eighth among OHL rookies with 36 points in 68 games, but 12 came in the last 17 games of the regular season. He’s got both room and time to fill out and earn bigger minutes, and we see him as a potential top-6 pivot down the road.

Jonne Tammela
Position: Right Wing
Shoots: Left
Height/Weight: 5’10, 180 lbs
Born: August 5, 1997, Ylivieska, Finland
Central Scouting Rankings (Prelim/Mid/Final): “C”/ 37th Eur/ 33rd Eur
Summary: Skilled speed burner who plays too much of a reckless (and certainly defendable) game. This Finn can bring you out of your seat with excitement but can get knocked off balance with a quick stiff-arm shove. But the Bolts can be patient with a kid whose top-end skill is not only undeniable, but in line with their up-tempo attack. Tammela is yet another six-foot-or-under winger Tampa GM Steve Yzerman habitually drafts, so the latter is a bit of a redundant prospect within the organization. Being a late birthday gives him a little more time to make a name for himself.

Mathieu Joseph
Position: Right Wing
Shoots: Right
Height/Weight: 6’1, 166 lbs
Born: February 9, 1997, Laval, QC
Central Scouting Rankings (Prelim/Mid/Final): NR / NR / 125th NA
Summary: Steady climber with pretty good speed who worked his way up from flanking fellow 2015 draftee Samuel Dove-McFalls (PHI) as a depth player, to manning the wall on the Sea Dogs’ top power play unit. Not a very strong winger at this stage of his development, Joseph needs to hit he gym so he can become even tougher to play against. Still, he’s a physical two-way power forward project and a threat on the penalty kill (three shorthanded goals). Joseph should without question be the Sea Dogs’ top line right wing next season.

Ryan Zuhlsdorf
Position: Defenseman
Shoots: Left
Height/Weight: 5’11, 185 lbs
Born: July 1, 1997, Edina, MN
Central Scouting Rankings (Prelim/Mid/Final): “C” / 185th NA / 202nd NA
Summary: Bound for the University of Minnesota in 2016-17 after being named Sioux Falls’ captain for the upcoming season, Zuhlsdorf was a 2015 First Team All-Rookie in the USHL who was on the Musketeers’ top pairing alongside league Defenseman of the Year and former captain Neal Pionk. Zuhldorf is a solid positional defender and his league-leading plus-25 is a testament to his awareness and level of responsibilties, especially when you consider the aforementioned Pionk’s penchant for risk taking and jumping into plays. That doesn’t mean Zuhldsdorf isn’t capable of doing the same — he most certainly possesses good speed and puck rushing attributes. The offensive production, however, just wasn’t there, which is a bit of a warning sign when you look at his big minutes and power play time. Zuhlsdorf is not that physical a defender but his positioning is good enough to limit mistakes.

Kristian Oldham
Position: Goaltender
Catches: Left
Height/Weight: 6’2, 203 lbs
Born: June 25, 1997, Anchorage, AK
Central Scouting Rankings (Prelim/Mid/Final): NR / NR / 29th NA
Summary: The Lighting under Steve Yzerman generally grab a goaltender every draft, so it wasn’t a surprise to see them go back to the USHL for some added prospect depth between the pipes. Oldham is committed to Nebraska-Omaha for 2016-17 so he’ll likely have to battle it out with Evan Driscoll for the Lancers starting gig this coming season. And while he technically could play in the NCAA this season, his execution of the butterfly is still suspect and playing another year in the USHL will serve him best. One thing we noticed is that he’s not quick on his feet after his initial dropdown, and his glove hand is not strong enough to snare shots aimed at the top half of the net. His rebound control is pretty solid at this point, and though he doesn’t play too deep in the net, he’s got above-average side-to-side quickness. For now, he just needs to improve his post-shot positioning and get that glove up a lot sooner.

Bokondji Imama
Position: Left Wing
Catches: Left
Height/Weight: 6’1, 214 lbs
Born: August 3, 1996, Montreal, QC
Central Scouting Rankings (Prelim/Mid/Final): NR / NR / NR
Summary: The Bolts may think they need toughness, so they went out and drafted a goon with their ninth and final pick of the draft. To his credit, Imama actually is a pretty good fighter. Whether or not that’s his meal ticket to the NHL remains to be seen. From a skill standpoint, there isn’t much there except some high-energy plays on the forecheck and the occasional body check. I could carve up other areas necessary in becoming a productive NHL’er, but it would be pointless; if he gets a job anywhere, it’ll be because of his fists.