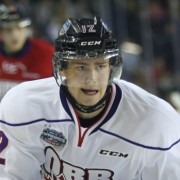 Ryan Gropp
Position: Left Wing
Shoots: Left
Height/Weight: 6’2, 187 lbs
Born: September 16, 1996, Kamloops, BC
Central Scouting Rankings (Prelim/Mid/Final): “B”/ 62nd NA/ 71st NA
Summary: We consider a power forward like Gropp to be the kind of player who is an excellent draft pick and a likely NHL’er but probably drafted a full round or two higher than where he should have been. Nevertheless, Gropp led his team with aplomb after he was shouldered with the burden of carrying a thin offense when star center Matt Barzal cracked his kneecap. Gropp helped steady the ship with 21 points in 24 games as the T-Birds even managed a seven-game winning streak.  Once Barzal returned, Gropp’s goal scoring increased, and the chemistry the duo shared was obvious in not only the points they were racking up together, but the kind of plays they were executing. It’s easy to see how the Rangers view him as a potential game-breaking threat, as he combines offensive capabilities with a punishing forechecking style and an intimidating presence in open ice. Like most power forwards, however, Gropp goes through periods of being invisible, and chooses to ease up on his forechecking and hitting. And while that’s a bit understandable for certain offensive types who don’t want to overexert themselves within their first few shifts into a game, Gropp can come across as disinterested and somewhat standoffish when a scoring chance has to be earned the hard way. Those kinds of vices can be worked on, however, as he will likely develop into a dangerous all-around NHL player with our without the inconsistencies.

Robin Kovacs
Position: Right Wing
Shoots: Left
Height/Weight: 6’0, 176 lbs
Born: November 16, 1996, Stockholm, SWE
Central Scouting Rankings (Prelim/Mid/Final): “C”/ 17th Eur/ 8th Eur
Summary: Somewhat surprising a skilled speedster like Kovacs — ranked fourth among European forwards by Central Scouting– fell into the third round. While we think he doesn’t possess the elite, game-breaking skill like Denis Malgin, Kirill Kaprizov and Jonne Taamela, Kovacs falls into the category where he’s almost certain to crack a contending team’s top nine, but you wonder about how skilled and productive an NHL player he’ll become. While Kovacs owns a seemingly unstoppable motor and the ability to shred an opponent’s breakout scheme, his stickhandling, pass receiving and decision making on the rush likely prevent him from receiving goal-scoring responsibility on a top unit. But when you can compete and skate like Kovacs, the chances will find him rather then other way around. The Rangers (thanks to Euro scout Anders Hedberg) are generally both patient and successful with their European finds, so expect Kovacs to bulk up and hone his hand-eye coordination before ultimately landing a permanent job as a Ranger on Broadway.

Sergey Zborovskiy
Position: Defenseman
Shoots: Left
Height/Weight: 6’3, 197 lbs
Born: February 21, 1997, Moscow, Russia
Central Scouting Rankings (Prelim/Mid/Final): NR/ 197th NA/ 103rd NA
Summary: A real head scratcher of a pick considering he didn’t really do anything significant to warrant such a meteoric rise on the Central Scouting rankings and was likely available in later rounds anyway. He is not a puck mover, and though he did play on Regina’s power play, he’s pretty far from being considered the kind of power play specialist the Rangers have been looking for since the days of Brian Leetch.  In a draft where two-way skilled blueliners were aplenty, choosing a physical defender who seems afraid to use his long stride and skating abilities to contribute offensively, and has trouble connecting on his breakout passes, makes you wonder what the Rangers were thinking. Especially when you consider their scouting staff and front office is still burning at the stake for drafting a similar player (albeit slower) in Dylan McIlrath tenth overall back in 2010. While Zborovskiy lacks confidence in his skating, he does like to drop down to the circles and wait for opportunities to unleash a very heavy shot. Being physical while showcasing offensive instincts in a grind-it-out environment and playing on the power play is likely what helped him vault up the rankings, because we certainly didn’t view him as the must-have “shut down” type. His slot coverage and gap control are both highly suspect, which is a definite developmental focus considering he’s got great leg drive and a long reach. Yet time again, we saw him botch coverage from napping and puck gazing. We’re fine with projects, and if you’re a contending team like the Rangers, it’s safe to say they can afford to wait. But looking at the names picked after him kind of makes you want to say yeeeesh! 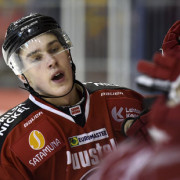 Aleksi Saarela
Position: Center
Shoots: Left
Height/Weight: 5’10, 195 lbs
Born: January 7 1997, Helsinki, Finland
Central Scouting Rankings (Prelim/Mid/Final): “B”/ 25th Eur/ 31st Eur
Summary: Skilled two-way center who played his entire draft year in the Finnish Liiga and capped off his season with an outstanding U18 centering Finland’s second line between 2016 draft elites Jesse Puljujärvi and Pat Laine. A fierce competitor with extremely soft hands and elite-level hand-eye coordination, Saarela offers the complete package from an offensive standpoint: he skates very well, has a hard shot with a quick release, possesses acute awareness, has excellent playmaking abilities and most importantly, is fearless on the ice. The bad news? He’s got a history of being hurt, with a knee injury keeping him out of the 2015 WJC and then a likely concussion (deemed a LBI) from a Brian Salcido hit in a Liiga game vs SaiPa on January 15th. It’s going to be hard to convince him to change his style in order to prolong his career, but you have to think the head injury concerns lowered his value when he was once considered one of Finland’s best 1997-born prospects.

Brad Morrison
Position: Left Wing
Shoots: Left
Height/Weight: 6’0, 160 lbs
Born: January 4, 1997, Prince George, BC
Central Scouting Rankings (Prelim/Mid/Final): NR/ 150th NA/ 124th NA
Summary: Speedy keg of dynamite who needs two duffel bags to carry around the tricks he’s been known to pull off at a moment’s notice. He’s paper thin but extremely shifty and quick, and his ability to finish plays within the tightest of spaces makes you wonder why he wasn’t selected even higher, especially when you realize this kid is fearless and doesn’t shy away from the dirty work. He needs to become a more well-rounded player by adding strength nd developing awareness in his own end. On top of all that, you have to wonder whether all his dekes and jukes will fly against more mature and intelligent defenders. Still, he’ll likely adapt to the changing environment just like his opponents, and when you have a puck-magnet who can grab it, keep it, dish it and shoot it, you eventually reap the benefits in spades. 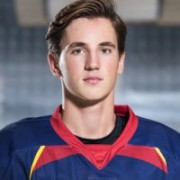 Daniel Bernhardt
Position: Left Wing
Shoots: Left
Height/Weight: 6’3, 191 lbs
Born: April 11, 1996, Stockholm, Sweden
Central Scouting Rankings (Prelim/Mid/Final): NR/ NR/ 62nd Eur
Summary: An overager who was passed over in 2014 but tore up the SuperElit while playing left wing on Djugardens’ top line centered by Habs’ draftee Lukas Vejdemo, Bernhardt is an offensive forward who isn’t physical in a punishing sense but knows how to use his size and reach to excel both on the rush and in protecting the puck in battles along the wall. He has impeccable timing and a quick release — he doesn’t fiddle around with the puck and has soft enough hands to receive passes cleanly on either his forehand or backhand. And while you have to take into consideration his dominance as an overage power forward prospect in a junior league, he looked very confident from an offensive/puck possession standpoint in his two-game SHL stint with the parent club. His biggest knocks are he’s somewhat lazy when the puck is headed in the opposite direction and shies away from taking a hit during puck pursuits. Truth be told, he’s a dynamic scorer who’s been taking advantage of weaker circuits, which isn’t necessarily a bad thing. The book is still out on whether he can earn a top-9 role in the SHL like most post-draft skill forwards. He better get cracking on improving his play in his own end if he wants to make that a reality. 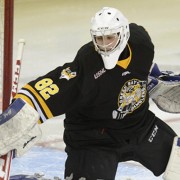 Adam Huska
Position: Goaltender
Catches: Left
Height/Weight: 6’3, 193 lbs
Born: May 12, 1997, Zvolen, Slovakia
Central Scouting Rankings (Prelim/Mid/Final): “C”/ 5th NA/ 16th NA
Summary: The Rangers essentially traded up the length of the seventh and final round to nab Slovakia’s starter from the U18’s who put on a solid showing which began with a 36-save effort in a 3-1 win over Sweden (Slovakia’s first since 2007). Huska ended up finishing fifth in the tournament with a .913 save percentage but he had already solidified his case as a netminder to keep an eye on for the future. A butterfly-style goaltender who plays deep in the crease but has shown excellent flexibility and reaction time, Huska split last season between the Slovak national team and the USHL’s Green Bay Gamblers, where he was roughed up quite a bit in limited action. From a technical standpoint, Huska is quick on his feet and doesn’t get caught out of position often, but his glove-hand positioning and glove/blocker quickness are areas he needs to work on. Still, Huska reads plays and tracks the puck extremely well, so getting back up on his feet and setting himself are major areas you wouldn’t consider weaknesses. Very good selection considering where he was picked and how the Rangers somewhat made up for losing Cam Talbot from a player development standpoint.