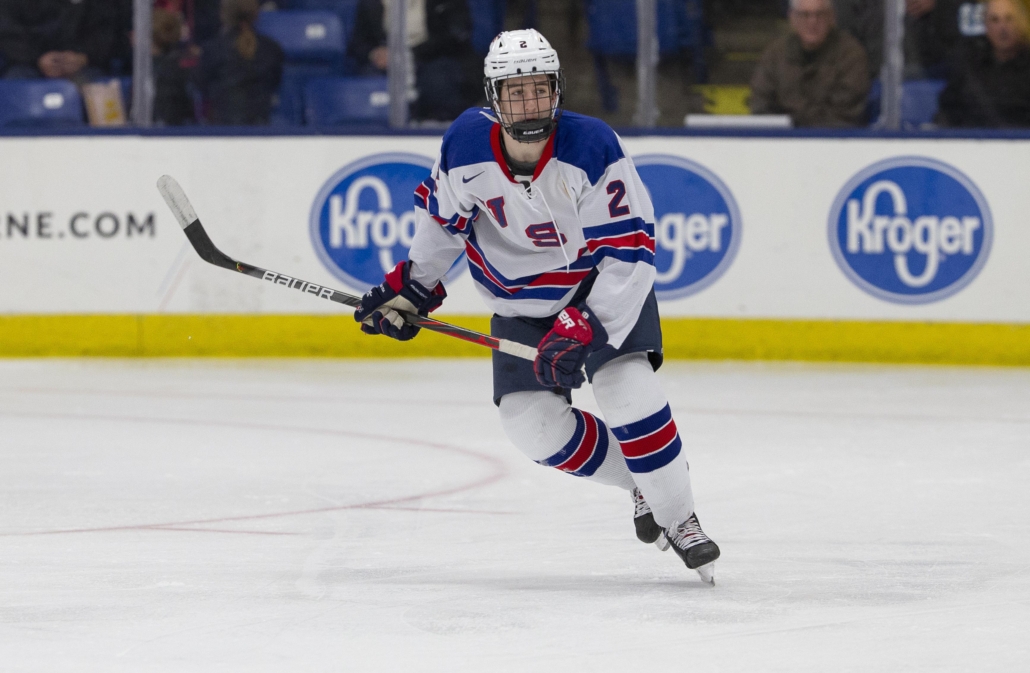 There’s no denying how deserving Jake Sanderson is of the accolades he received as one of the 2020 draft’s premier defense prospects. But most star defensemen need a reliable partner who on occasion can shoulder the burden of puck carrying, and Powell fit into that role like a glove. He easily is one of the smartest defensemen available and his plus skating and tape-to-tape passing shows he’s a lot more than just a security blanket. Powell, who is committed to Boston College, placed in the top three in scoring among NTDP defensemen in each of his two seasons with the program. All 14 of his points this season, however, came solely against USHL competition, meaning he was held off the scoresheet in 23 combined matches against the NCAA and international under-18 squads.

Powell’s overall skating package is impressive and quite noticeable during any given shift. He has a quick first step and can accelerate to top speed in only a few strides. Powell’s attentiveness is consistently high in all three zones and he beats opponents to critical openings or loose pucks far more times than not. He can look graceful and fluid while going coast to coast but he also looks nimble and loose when reading and reacting to play off the puck. Powell’s head always seems to be on a swivel and he processes multiple options simultaneously. Being an excellent skater helps, but he appears to outthink the quickest forwards in a variety of scenarios where simply being fast won’t cut it. Thanks to his off- the-charts situational awareness, Powell covers any zone like a blanket, thus allowing an active partner like Sanderson to feel comfortable pinching below the faceoff dot.

Passing the puck accurately and over long distances is something Powell does extremely well during the majority of his breakouts. Shooting the puck, however, is something he needs to do more of, especially since he keeps his shots hard, low, and on net. The trend with most NTDP defensemen throughout the years has been for them to limit puck rushing beyond the opposing blue line and allow their speedy two-way forwards to spearhead the attack into the zone. This year’s group seemed to have the same short leash during breakouts as their NTDP predecessors, although Powell’s hands, decision making, shot power, and shot release stood out when he decided to involve himself. He spent a good portion of the season on the first power-play unit as more of a shooter and distributor than a quarterback or orchestrator, and eventually his time during the man advantage decreased when the group consisted of four forwards and Sanderson. Still, Powell led all NTDP blueliners with four power-play goals.

Defensively, Powell relies on his quick feet and active stick to neutralize plays before the puck enters his zone. He isn’t as physical as the likes of Sanderson or Tyler Kleven but he competes hard in trench warfare and shows a good overall battle level and motor. Powell also was a mainstay on the penalty kill and proved to be effective late in shifts during any part of a period, which is impressive considering he usually played well over minutes a game.