Trade Tracker: Bruins trade Lucic to Kings for 13th overall pick Flames acquire Hamilton from B‘s for 15th overall and a pair of 2nd’s Lehner heads to Buffalo for 21st overall selection Av‘s deal O’Reilly to Sabres for Zadorov and Grigorenko Oilers roll dice and move 16th and 33rd overall for Isles’ Reinhart Leafs turn Nashville‘s first rounder into picks No.’s 34, 61 and 68 Devils get Jersey native Palmieri from Ducks for 41st overall Isles use a 2nd and 3rd to acquire 28th pick from Tampa Jackets use a 2nd and 3rd to take blueliner Gabriel Carlsson at 29 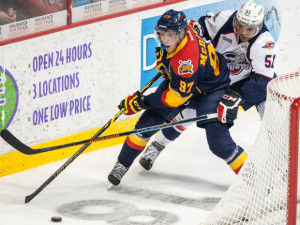 Team/League: Erie/OHL
Position: Center
Shoots: Left
Height/Weight: 6’1″ 195 lbs
Born: January 13, 1997, Newmarket, Ontario
Central Scouting Rankings (Prelim/Mid/Final): “A” / 1st NA /1st NA
Scouting Report: Brilliant, graceful and imaginative offensive machine who has produced one of the finest amateur resumes in recent memory. Hard to convey his dominance in words; you just have to watch him play one shift and it will encompass all the reasons why he’s a special talent. McDavid is an explosive skater with breakaway speed, but his balance and ability to control the puck at the highest of speeds is unmatched in this draft. He is also extremely shifty and can change gears effortlessly, especially to the outside. One of the best players in the world at any level at chipping and retrieving the puck to an open area, then turning it into a high-quality scoring chance. Is an elite playmaker who makes hard, crisp passes on both forehand and backhand. Extremely difficult to contain and seal off, McDavid is a highly-intelligent player who can outwork and outmaneuver any opposing shadow or checking assignment. 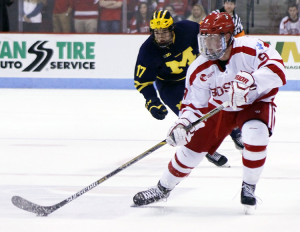 Team/League: Boston University, HE
Position: Center
Shoots: Right
Height/Weight: 6’2″ 194 lbs
Born: October 28, 1996, North Chelmsford, MA
Central Scouting Rankings (Prelim/Mid/Final): “A” / 2nd NA /2nd NA
Scouting Report: Arguably the most complete player among his peers, Eichel is a unique blend of power and finesse with a thorough understanding of the game. His arsenal of skills, however, is not the sole reason for his high standing. He is a born leader with a tremendous desire to succeed and leads by example. He has an uncanny ability to change the complexion of a game at a moment’s notice with or without the puck. Possesses a heavy, accurate shot with a quick release, and is adept at getting it through screens and clogged shooting lanes. Does not need backswing to generate velocity, and the deceptiveness of his off-wing wrist shot is reminiscent of Mark Messier. He is an excellent skater with breakaway speed and NHL-caliber leg drive. Eichel can also cover a lot of ground in little time. Tremendous playmaker with superior vision, Eichel finds the open man, even with his back turned while drawing two or three defenders towards him. 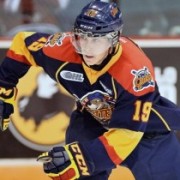 Team/League: Erie Otters / OHL
Position: Center
Shoots: Left
Height/Weight: 6’3″ 187 lbs
Born: March 7, 1997, Mississauga, Ontario
Central Scouting Rankings (Prelim/Mid/Final): “A” / 5th NA /4th NA
Scouting Report: Strome’s elite play with the puck and the way he protects it can make attempts at slowing him down both futile and nightmarish. He’s a hard match up who can carve up any game plan with precision puck movement. Strome is a big-bodied center who destroyed the OHL this year and did so while playing second fiddle to McDavid. He’s excellent at creating plays off the rush, but he also excels when the game is tightly checked and every lane is seemingly clogged. It is in the offensive zone where he uses his size, reach and elite vision to his advantage. He’s a precise passer and gifted playmaker who epitomizes opportunistic; make a bad decision with him on the ice, and there’s a good chance you’re going pay for it. Strome is extremely patient with the puck but knows when to hold on and wait for better options or simply let one rip. He can certainly be classified as a goal scorer; he favors an excellent wrist shot over the slapper, both fired with very good accuracy. He has a great nose for the net and possesses soft hands; time and again you saw Strome quickly corralling rebounds or loose pucks in and around the crease for either a hard-fought goal or a quick pass to an open side. 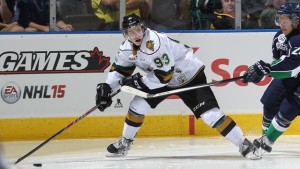 Team/League: London Knights / OHL
Position: Right Wing
Shoots: Right
Height/Weight: 5’11” 170 lbs
Born: May 5, 1997, Thornhill, ON
Central Scouting Rankings (Prelim/Mid/Final): “A” / 7th NA / 6th NA
Scouting Report: Marner is an exciting player and a fierce competitor who earns the majority of his points from intelligent play and positioning. In the upper tier of puck handlers and playmakers among his draft class. Never hesitates with his decision making; he thinks two and three plays ahead of everyone else. Amazingly soft hands, he can stickhandle his way in and around high traffic areas, and is most dangerous when he has time and space. Knows shelf life of plays in his own end, and can quickly transition to backchecking. Relentless on the forecheck, he is adept at takeways; either stripping opponents of the puck or getting his stick in the way of passes. Superior hand-eye coordination. Wants to win and will do whatever it takes to do so. Also possesses an excellent shot in terms of accuracy and release. Can make hard pass or release hard shot off his backhand. He engages in physical battles but he struggles with them and chooses to position himself better rather than involve himself in an unwinable situation. 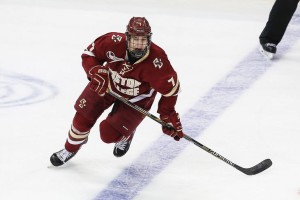 Team/League: Boston College / Hockey East
Position: Defenseman
Shoots: Left
Height/Weight: 6’3″ 205 lbs
Born: June 23, 1997, Norwood, MA
Central Scouting Rankings (Prelim/Mid/Final): “A” / 3rd NA / 3rd NA
Scouting Report: When you look at Hanifin from a purely individual standpoint, he’s top notch in so many areas. He is a tremendous skater forward and back, and possesses a long reach. This makes him difficult to beat one-on-one or in odd-man situations. Thus, his gap control is impeccable for anyone, let alone a teenager, and rarely does he resort to hooks and grabs. What makes him dangerous is when he takes these shutdown abilities and combines it with his superior IQ; at the blink of an eye, he’s stripped the puck clean and transitions the other way. Hanifin is a hard and accurate passer, especially across/up the ice,  but he is also adept at beating pressure with a simple chip or ladle. He’s got great hands for a guy his size, specifically on the power play when he’s receiving hard cross-ice passes on either his backhand or forehand. He has an average shot, but it’s accurate and keeps it low. From a physical standpoint, Hanifin is big, but his physical play is part of a process rather than a reaction. He has delivered big hits and can clear the crease, but not at the cost of positioning.