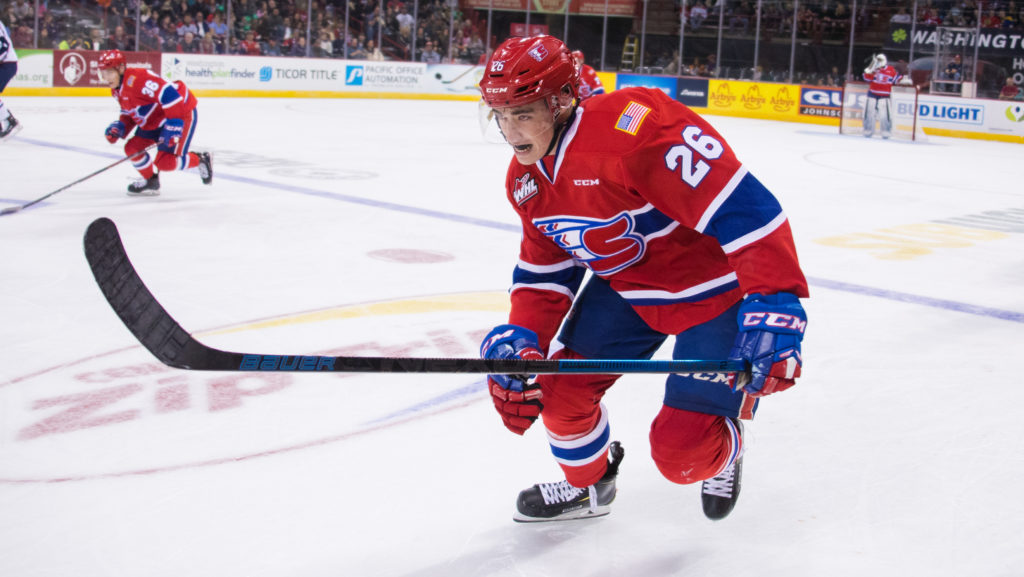 The dream finally became a reality for this current group of Lightning, which won their first Stanley Cup in 16 years but more importantly, did so with a bunch of homegrown kids who were original Tampa draft picks. This year’s Bolts’ draft class doesn’t feature a first-round pick, but being selected outside Round 1 hasn’t stopped previous draftees from working their way through the farm system and into the big club’s lineup (see Nikita Kucherov, Ondrej Palat, and Anthony Cirelli, among others).

On paper, GM Julien BriseBois and famed scouting director Al Murray once again collected an impressive group of prospects to add to an already formidable farm system; although still one in need of replacements after trades and graduations.

In total, nine neophytes were added to Tampa’s rolls, including four from either Rounds 2 or 3. They kicked off their 2020 draft by taking a versatile center with size in Spokane’s Jack Finley at pick No. 57, then stuck with the WHL theme five picks later when they added heady overage center Gage Goncalves. Russian winger Maxim Groshev, who is a possession fiend and boasts a wicked shit, was a strong pickup in Round 3, as was Sudbury puck rusher Jack Thompson. But the biggest surprise (and potentially, a major steal) was underrated NTDP defenseman Eamon Powell falling into their laps at 116th overall.

The Bolts love their overagers, and they got a good one in Portland’s Jaydon Dureau, an energy winger who earns his points and was critical in the success enjoyed by 2020 first-rounder Seth Jarvis. Another hard worker is USHL winger Nick Capone, who plays a spirited game with a significant tinge of violence to it. Overager goalie Amir Miftakhov puts up gaudy numbers in Russia and has played for them at the WJC, but he’s on the smaller side and probably won’t be available for the AHL for several seasons. Tampa wrapped up their draft haul with underrated sniper Declan McDonnell, who filled the net for Kitchener despite playing away from the top six for most of last season.

The son of former NHL defenseman Jeff Finley, Jack is a different player altogether. Although you’d be correct in assessing him a 200-foot type based on his size (6-foot-6) and his usage in defensive zone situations, Finley offers far more than just faceoff prowess and penalty killing. For starters, he has excellent vision and awareness to act as a dependable playmaker. His speed is average but not necessarily for forwards with a playing weight close to 213 pounds — Finley shows escapability and agility when controlling the puck with his back to the boards, and some of timing passes he pulled off were of the highlight-reel variety. Having a high IQ, soft hands, and creativity makes Finley even more useful beyond his already impressive two-way play.

I’m usually against drafting overagers in the first or second round, but Goncalves advanced in his development in impressive fashion. He was a consistent scorer as a top-liner for the WHL’s Everett Silvertips, but Goncalves’ also plays with noticeable energy and physicality to compliment his improved game on the puck. He’s always pegged me as a winger — mostly because of his deadly wrister — but Goncalves was effective as a passer and connected with linemates with timely setups after controlling the puck under pressure. He may have been picked two or three rounds higher than expected, but Goncalves certainly was one of the CHL’s premier overagers who were available this draft.

Groshev was one of the top Russian wingers available and there were points during last season when he delivered impressive performances consistent with prospects earmarked for Rounds 1 or 2. To start, Groshev had several commendable international showings at both the U18 and U20 level, and also earned a KHL promotion early into his draft season. Based on his already strong resume, it would be reasonable to think Groshev would have been drafted higher had he played a full season of junior hockey, where his statistics would look gaudier. He’s a horse on the puck and uses his wide frame to maintain control as he makes quick bursts towards the goal. I don’t think Groshev’s average speed is an issue because he’s always seems to be open for a high-quality shot, nor does he need reminding to establish a net-front presence. Groshev also has a lethal wrister and has delivered highlight-reel snipes when given the room.

A puck mover who intrigued me all season as a potential top-62 pick, Thompson was Sudbury’s main weapon from the blue line; although as part of a forward-centric attack. He tried his best to take advantage of open ice, and Thompson definitely can skate the puck out on his own. He can run a power play and shoot a hard, accurate blast off the pass, but he needs to be more consistent with his rush attempts and not always look for a safe option, especially when he’s given the room to exploit openings.

My favorite pick from Tampa’s 2020 draft class and for good reason — I ranked Powell 38th and was told by several industry types that he was in fact deserving of what many thought was a bullish placement. Nonetheless, Powell going two rounds later than I thought shouldn’t make a lick of difference to his already pro-level approach to his position. He is silky smooth with the puck and proved his worth in the defensive zone by never quitting in a puck battle and wielding a highly-active stick. Powell was partnered with fifth-overall pick Jake Sanderson for most of last season, which works both for and against him when evaluating his in-game contributions. Personally, I think this Boston College-bound kid will be one of the top defensemen in Hockey East within the next two to three years.

Another WHL overager who played an impact role for his squad, Dureau, much like Goncalves, worked hard in the offseason and league play to improve his draft stock. Dureau spent most of the second half of the 2019-20 campaign on Portland’s top line with Seth Jarvis and Reece Newkirk, but Dureau certainly was no passenger. He used excellent speed and tenacity to hound the puck all over the ice; specifically in the neutral zone where sharks like Jarvis and Newkirk could pounce on the loose change Dureau’s pressure created. His puck skills are underrated but Dureau usually allowed his notable linemates to run a given possession. Still, the fact that Dureau was undrafted in the WHL yet is now Lightning property speaks of the sacrifices he made to get there.

A long-term project pick through and through, Capone at his best can be a unicorn — a rugged power forward with a mean streak who displays impressive puck skills and deceptive speed. Although Capone can’t help himself when it comes to being involved in rough stuff, there are times when his playmaking and hands take center stage. The issue is those moments are few and far between, so inconsistent play and discipline issues is probably why he was drafted in Round 6 and not higher. He’s a Connecticut native who’ll be playing for UConn once his USHL time is up.

A darling of the stats-only community, Miftakhov is a prospect who’s been talked about for several years; mainly for his role on Russia’s junior national teams at multiple levels. Gauging a goalie’s potential off Russian league stats is not recommended since all three circuits are among the lowest scoring in the world. To Miftakhov’s credit, his limitations in size (6-foot-0, 165 pounds) helps him dominate the lower half of the net, to include eye-popping pad saves of second and third attempts. The issue is that he plays deep in the crease and although he addresses his angles well, there always seems to be plenty of room either glove or short-side high. Miftakhov’s expert anticipation helps cut those attempts down, but NHL shooters are the best in the world at hitting those targets.

One of the things I look for is competition between teammates; specifically a notable prospect versus a lesser-known. Most of us felt that Kitchener’s Reid Valade would be the first Ranger forward off the 2020 draft board, but by midseason it was McDonnell who stole most of the spotlight. Quick, feisty, and the owner of an accurate wrister, the Buffalo native provided timely scoring on a squad that was one of the OHL’s deepest at the forward position. I won’t go as far as to call McDonnell a steal, but you can pencil him in as one of the more promising later-round picks.