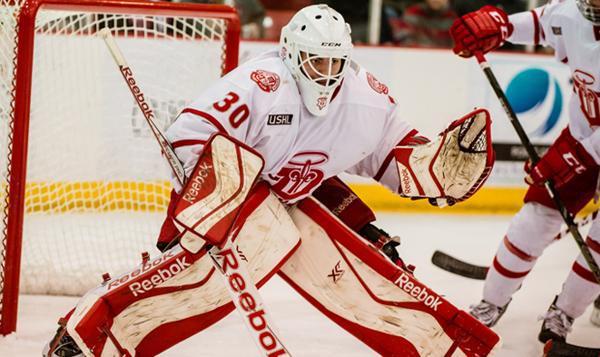 Goaltender Jacob Nehama (Colorado College) stopped 26 shots to earn his first shutout of the postseason. He improved to 5-2 in the playoffs with a 1.87 goals-against average and .939 save percentage. Defenseman Hayden Shaw (North Dakota) had an assist and leads all USHL defensemen in postseason scoring with 11 points (two goals, nine assists) in seven games.

The Lumberjacks received a 40-save effort in Game 4 from goaltender Eric Schierhorn (University of Minnesota), who led the league with a  .927 save percentage during the regular season. He has faced an average of 36 shots a game in the playoffs. Defenseman Corey Schueneman (Western Michigan) leads Muskegon in scoring with 10 points, and is tops among USHL blueliners with four goals in eight games. Lumberjacks defenseman Joseph Cecconi (Michigan) is the only 2015 draft-eligible player on either side ranked by the National Hockey League’s Central Scouting Bureau in their final rankings. Ceccone was ranked 88th among North American skaters.

Muskegon has yet to win a USHL championship, while Dubuque has won the Clark Cup five times, including recent triumphs in 2011 and 2013.