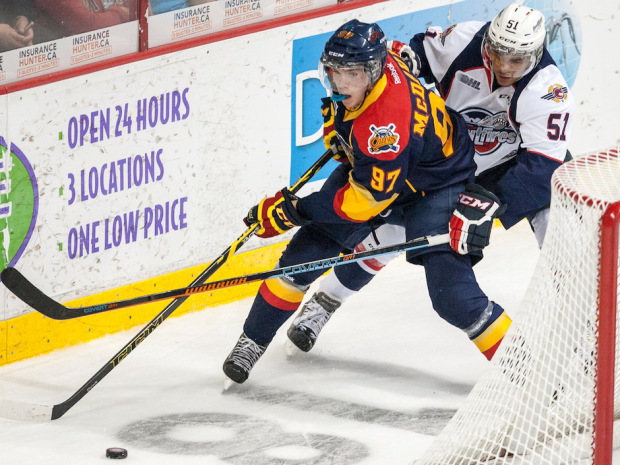 Position: Center
Shoots: Left
Height/Weight: 6’1″ 195 lbs
Born: January 13, 1997, Newmarket, Ontario
Obtained: 2012 OHL Priority Draft (1st Round, 1st Overall)
Central Scouting Rankings (Prelim/Mid/Final): “A” / 1st NA /1st NA
Notes: Had CHL’s highest points-per-game average (2.55) since Sidney Crosby’s 2.71 for Rimouski (QMJHL) in 2005…Is a finalist for OHL Player of the Year honors…Tied for team lead in scoring with 11 points to help lead Canada to a gold medal at the 2015 World Junior Championship, where he was named to All-Tournament Team…Won OHL Rookie of the Year award in 2014…Led Canada to its third goal medal at U18 World Championship with a tournament-best 14 points in seven games…Won second straight Bobby Smith Trophy for the OHL’s Scholastic Player of the Year…Missed six weeks with a broken hand from a fight with Mississauga’s Bryson Cianfrone but returned in time for the WJC.

Brilliant, graceful and imaginative offensive machine who has produced one of the finest amateur resumes in recent memory. Hard to convey his dominance in words; you just have to watch him play one shift and it will encompass all the reasons why he’s a special talent. McDavid is an explosive skater with breakaway speed, but his balance and ability to control the puck at the highest of speeds is unmatched in this draft. He is also extremely shifty and can change gears effortlessly, especially to the outside. One of the best players in the world at any level at chipping and retrieving the puck to an open area, then turning it into a high-quality scoring chance. Is an elite playmaker who makes hard, crisp passes on both forehand and backhand. Extremely difficult to contain and seal off, McDavid is a highly-intelligent player who can outwork and outmaneuver any opposing shadow or checking assignment. His play without the puck is excellent; the puck doesn’t just seem to find him. It happens because his superior vision and keen understanding places him where the puck can only go. Has lightning-quick hands around the net and can elevate the puck with ease, even when outstretched. Combines Sergei Fedorov’s size and smarts with Pavel Bure’s speed and shot, but with an insatiable thirst for competition and success. For McDavid to succeed as expected, he needs to continue to add to his arsenal of moves and become more unpredictable than he is at the CHL level. He has shown to get frustrated when things don’t go his way and lets his emotions get the best of him. Is ready for the next level and if allowed, would center most first or second lines beginning next season.