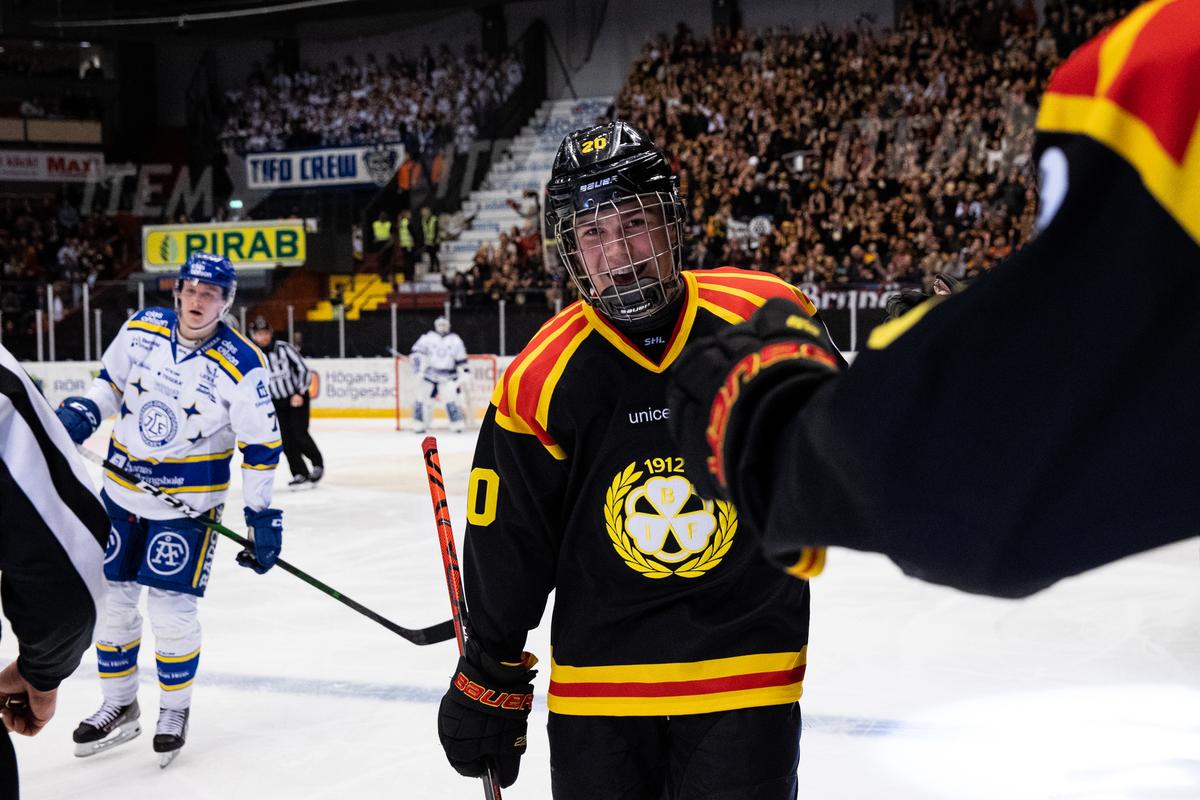 This was the second straight draft where the New York Islanders weren’t expected to be busy, only unlike like year they would not have a first-round selection. The farm system was in decent shape heading into the 2020 draft thanks to an impressive haul in 2018, but its lack of premier center prospects made it reasonable to think GM Lou Lamoriello and chief scout Trent Klatt would target the position with at least one of their five choices. Surprisingly, the Isles opted to skip pivots altogether by grabbing three scoring wingers, a big stay-at-home defender, and one of the biggest goalies availalable.

It wasn’t until pick No. 90 when the Cup-contending Isles made their first choice, and with that they grabbed an underrated winger in Alexander Ljungkrantz (pictured), who distinguished himself as a top player for Brynas and even got an SHL call-up out of the deal. They nabbed a couple of dual-threat wingers in high-schooler Alex Jefferies and Drummondville’s William Dufour, with Ljungkrantz and Dufour ranking in my top 120, and Jefferies at 190. Defenseman Matias Rajaniemi was earmarked for the late rounds because of limited puck skills, but the one thing that kid can do is defend and do so extremely well. The Isles closed it out with 2000-born behemoth Henrik Tikkanen, who is a project through and through. Overall, not a bad day’s work considering the options available.

This was a solid pick six ways to Sunday. Not only because we had Ljungkrantz ranked right around where he ended up going, but also because he’s a lot of fun to watch. He was picked for the national U18 team but served more in a support role, but it was his play with Brynas that provided glimpses into his real potential. Ljungkrantz certainly validated his promotions to the top line and lead power-play unit, and the importance of his eventual call-up to the A-team cannot be understated. He can be a line driver on his own because of his hands, agility, and quick thinking, but finishing is the one thing Ljungkrantz can do better than anything else. Just a solid pick altogether, and if you saw him play you’d see that the potential for point production is definitely there. For what it’s worth, Ljungkrantz currently is one of the top scorers in the J20 Nationell.

Getting mixed up in the high school-vs.-major junior debate can be exhausting, but you can always count on at least three or four U.S. prepsters who make stats and level of competition somewhat irrelevant. That’s exactly the case with a big sniper like Jefferies, who oozes pro potential and has the hands, speed, and shot to give him a real opportunity at stardom. All those things don’t always come naturally, however, as Jefferies works hard for his chances and he displays a commendable on-ice work ethic. The big test is going to come this year when he suits up for Dubuque in the USHL, and Jefferies should be expected to play at least three full seasons at Merrimack thereafter.

Just start calling him “Willie D” and let’s hope the name sticks, because this kid is flashy and has sick puckhandling abilities for any forward, let alone one who stands 6-foot-2 and 195 pounds. The chances of later-round CHL’ers sticking long enough to get an entry-level deal are slim, but bank on this playmaker to make it as hard as possible for the Isles to turn him away. He’s shifty, nimble, smart, and creative in a Kevin Hayes kind of way, but Dufour has been traded three times in less than two years after being the sixth pick in the 2018 QMJHL draft. Probably a nothing burger in the grand scheme of things and you have to think he might have a little chip on his shoulder for getting drafted later than expected.

The Isles generally like their defensemen to have length (sorry, Sebastian), but Rajaniemi represents only the second blueliner drafted by New York over the last two drafts. He plays as complete a defensive game as you’d want from a shutdown type, and he has enough horse power to stay stride for stride with most forwards. I wasn’t too high on him (Ranked No. 258) because I expected a kid playing 20+ minutes a night in junior to do more with the puck, but if you read my summary in the draft report you’d see I was beyond impressed with his ability to shut things down in both the neutral and defensive zones. If the Isles are going to continue to strategize from the net outward, then Rajaniemi’s chances of hitting should be higher than your average late sixth-rounder.

Something tells me the Isles have been tracking this kid for several reasons because it’s not like he produced some dominant draft season with a bunch of awards and medals. Being that Tikkanen is 6-foot-7 and only 20 years old obviously makes him a long-term project, and he’s already advanced from the junior ranks to the adult-age Mestis. The one thing that stands out about his game is his recovery quickness, at least within the context of Tikkanen being a big boy with heavier parts to lift. Unfortunately, Tikkanen can be wildly inconsistent with some critical technical aspects like butterfly execution and blocker usage. If there is something there, however, you have to trust the Isles to squeeze it out of him.