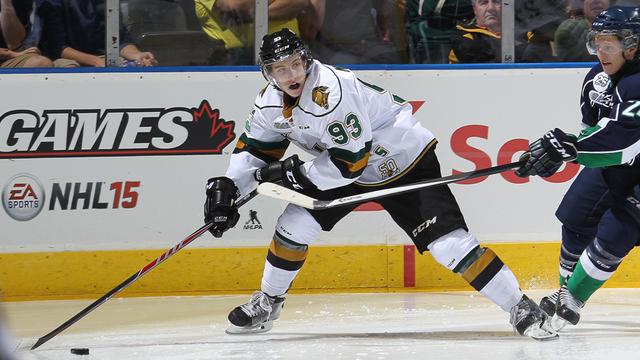 Photo courtesy of the London Knights

Name: Mitch Marner
Position: Right Wing
Shoots: Right
Height/Weight: 5’11” 170 lbs
Born: May 5, 1997, Thornhill, ON
Obtained: 2013 OHL Priority Selection (1st Round, 13th Overall)
Central Scouting Rankings (Prelim/Mid/Final): “A” / 7th NA / 6th NA
Notes: Led OHL rookies with 46 assists in 2013-14….Tied for 3rd in overall scoring at 2014 U18 Ivan Hlinka Memorial Tournament with seven points in five games to lead Canada to a Gold Medal…Finished 2nd behind fellow draft eligible Dylan Strome in OHL scoring in 2014-15 with 126 points in 63 games…His 126 points were most by a London Knight since Patrick Kane registered 145 points in 2006-07…Missed two weeks in late January after being hit from behind by Oshawa’s Will Petschenig….Was leading OHL in playoff scoring with 16 points in seven games when an elbow to the head from Erie’s Mason Marchment ended his season.

Marner is an exciting player and a fierce competitor who earns the majority of his points from intelligent play and positioning. In the upper tier of puck handlers and playmakers among his draft class. Never hesitates with his decision making; he thinks two and three plays ahead of everyone else. Amazingly soft hands, he can stickhandle his way in and around high traffic areas, and is most dangerous when he has time and space. Knows shelf life of plays in his own end, and can quickly transition to backchecking. Relentless on the forecheck, he is adept at takeways; either stripping opponents of the puck or getting his stick in the way of passes. Superior hand-eye coordination. Wants to win and will do whatever it takes to do so. Also possesses an excellent shot in terms of accuracy and release. Can make hard pass or release hard shot off his backhand. He engages in physical battles but he struggles with them and chooses to position himself better rather than involve himself in an unwinable situation. That may fly in the CHL, but to succeed at the next level, he will need to add strength by building muscle and having better balance on his skates when involved in trench warfare.