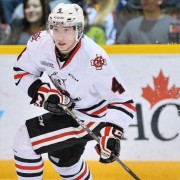 Vince Dunn
Position: Defenseman
Shoots: Left
Height/Weight: 6’0, 187 lbs
Born: October 29, 1996, Lindsay, ON
Central Scouting Rankings (Prelim/Mid/Final): ”B“/ 53rd NA/ 32nd NA
Summary: A definite favorite of ours, Dunn carried Niagara’s offense from the back end from wire to wire, but unlike most of the 2015 draft’s eligible elite puck rushers, he played a sound defensive game and provided leadership as well. Dunn has top-pairing potential but he’s almost a lock run the top power play unit (at least at the AHL level) thanks to his heavy, accurate shot and ability to thread the needle with either hard or crisp cross-ice passes. Even scarier is that the Blues aren’t the type of team in need of a possession/shot attempt kind of blueliner, but they just added one of amateur hockey’s better ones in that regard. Home run pick regardless of what round he was selected.

Adam Musil
Position: Center/Left Wing
Shoots: Left
Height/Weight: 6’2, 202
Born: March 26, 1997, Ottawa, ON
Central Scouting Rankings (Prelim/Mid/Final): “B”/ 32nd NA/ 61st NA
Summary: An expected breakout season didn’t happen but still an intriguing power forward who can duke it out and battle hard every night. Musil started off really well with 25 points in his first 32, but the wheels fell off as the season progressed before ultimately ending from an ankle injury on March 21st. Slumping to a tune of only four goals in his last 26 games and missing the entirety of Red Deer’s first round series loss obviously didn’t rub the Blues the wrong way, but we view him as a project type who for now needs helpful linemates to generate offense for him. He doesn’t necessarily excel in a specific offensive aspect but you can see him developing into a late-blooming NHL second liner simply because he’s so darn strong and fearless he’ll likely be on the receiving end of some nice opportunities.

Glenn Gawdin
Position: Center
Shoots: Right
Height/Weight: 6’0, 191
Born: March 25, 1997, Richmond, BC
Central Scouting Rankings (Prelim/Mid/Final): “B”/ 37th NA/ 59th NA
Summary: You wonder if the disappointing butt kickings the Blues received in all their recent playoff exits had a role in drafting this kid, who we feel was one of the draft’a hardest working and most responsible centers.  And while his spike in assists should not be attributed solely to playing with Bruins’ 2015 first rounder Jake DeBrusk (they weren’t linemates at even strength for half the season), he did benefit from consistently playing in the top six and with overage wingers. These are good signs, and the offense he provides should be considered gravy since he’s so darn indispensable in other areas.

Niko Mikkola
Position: Defenseman
Shoots: Left
Height/Weight: 6’4, 184
Born: April 27, 1996, Kiiminki, Finland
Central Scouting Rankings (Prelim/Mid/Final): NR/ NR/ 111th Eur
Summary: Underrated and relatively undetected Finnish two-way blueliner who has shown more while defending the puck than he has pushing it up the ice. He may have the skills to become a more involved defenseman, but he plays too bland a game to be considered anything more than a stay-at-home type. Confidence with the puck is an area he could most certainly work on, as he’s prone to make poor decisions when pressed. When he’s got time, he’s very reliable and makes clean, crisp head-man passes through gaps in the opposing forecheck. In our view, he should only be considered a sleeper to actually make it in the NHL. The chance he can provide offense at higher levels is slim to none.

Luke Opilka
Position: Goaltender
Catches: Left
Height/Weight: 6’1, 192
Born: February 27, 1997, Effingham, IL
Central Scouting Rankings (Prelim/Mid/Final): “B”/ 5th NA/ 12th NA
Summary: Previously committed to Wisconsin before ditching the NCAA for the Kitchener Rangers this summer, Opilka had an average season as the NTDP’s starter and then ultimately lost his job to the WHL’s Evan Sarthou for the U18 Worlds. He’s a risk-taking netminder who doesn’t look like he’s blanketing the goal but very quick on his feet to get into position. The positioning, however, tends to leave way too much room under the glove and on the short side. These things can be worked on, and he’ll have to do it in a hurry as the OHL’s skilled forwards can and will smell blood.

Liam Dunda
Position: Left Wing
Shoots: Left
Height/Weight: 6’4, 212
Born: September 15, 1997, Issaquah, WA
Central Scouting Rankings (Prelim/Mid/Final): “C”/ NR / NR
Summary: We don’t know what’s more puzzling: making this pick or the player picked. Either way is a head scratcher. On one side, you have the Blues going way off the board to draft a player with no offensive upside and a combined total of three goals in 100+ career OHL games. On the other side, you have a kid who has never played above the third line, and couldn’t produce or earn ice time on two thin teams in one season. His late birthday, penchant for dropping the gloves, and combination of size and somewhat-decent skating ability doesn’t justify the pick. And while he can’t go anywhere else but up, we think it’s inconceivable that the Blues in this day and age drafted a player who at this point is nothing more than a pugilist.