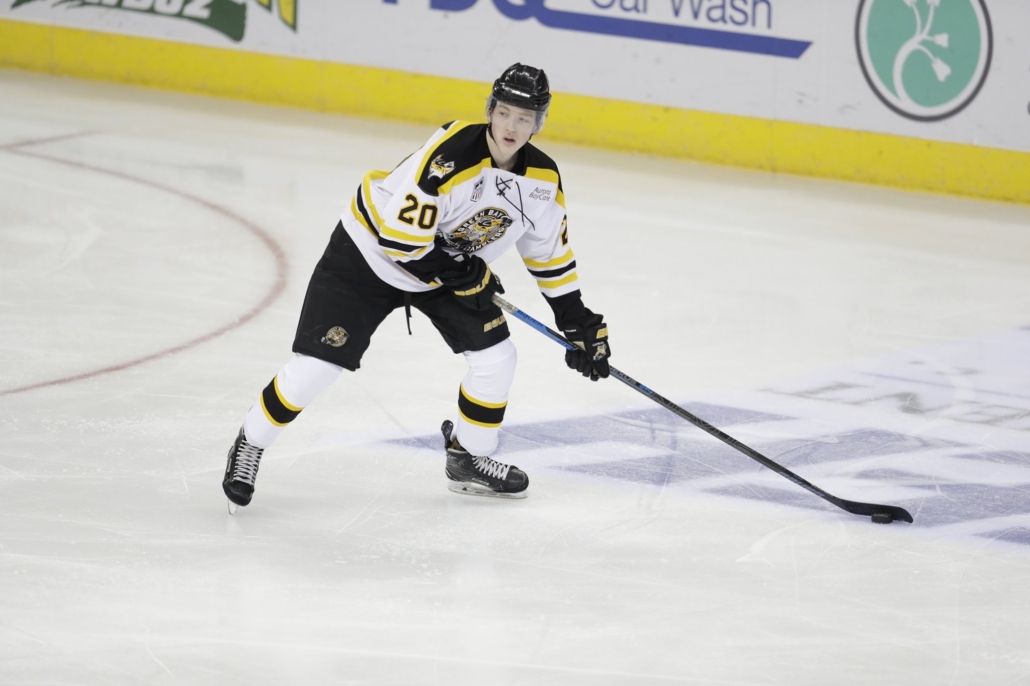 As if trading away their 2020 first rounder for Ondrej Kase wasn’t enough to steer Bruins fans as far away from the draft as possible, the fact that they had only four picks to begin with and none until late in Round 2 probably made the event even less appealing. Nonetheless, the Bruins trucked ahead and added beef to their depth chart with four college-bound prospects, with defenseman Mason Lohrei at No. 58 as the signature piece to this Boston-bound quartet.  Was he drafted too high? I’d say by a good two to three rounds. But the resume matches the upside and there’s a good bet the Bruins gravitated towards Lohrei’s footwork, gap control, and physicality that made him one of the USHL’s best overall defensemen. OK, so he’s a year older than the average prospect. But Lohrei’s headed to a big-time program at Ohio State so consider him both one year older and wiser for what’s going to be a tough thinking man’s game. The B’s thereafter chose two excitable forwards in Riley Duran (Providence) and Trevor Kuntar (Boston College) and a steady two-way defenseman in Mason Langenbrunner (Harvard)  — all three who will develop at colleges located within an hour of Bruins HQ. On paper, it is what it is — a gamble. But this also is a byproduct of winning at the NHL level, which is why the Bruins can afford to go slow with their prospects regardless of potential.

Scout’s honor — the “woah” and the “good pick” came within a few seconds of each other, and in that order. Yes, this was a surprising pick to everyone without intimate knowledge of the B’s draft intentions. But Lohrei keeps that neutral zone squeaky clean in either direction, and does so with a noticeable confidence. Becoming sealed off was something opponents seemed to expect when within Lohrei’s reach, and it would be highly unlikely if every opposing coach didn’t warn players about him during preperation. All may be well and good for now, but add the Lohrei selection to GM Don Sweeney’s growing list of draft-related controversies. Luckily he’ll be at Ohio State for the foreseeable future.

Again, another mild surprise but then again, not that mild of a surprise. I can always count on dozens of kids a year whose consistent play make me doubt my own rankings, and Kuntar was one of those players last season. If you want the truth, I got to see Kuntar shine against Owen Power, Nick Abruzzesse, and Chicago several years ago, and I marked him down as one of the best player’s in the game. I’ve been tracking him since, but going in the third round as an overager was something I don’t think anyone expected. Much like the Lohrei selection, this pick is at least a full year away from outrage eligibility, with Kuntar performing on a loaded Boston College squad in the meantime.

Another pick I fully endorsed and saluted, mostly because Langenbrunner was fantastic for Eden Prairie at the Minnesota state tournament and looked the part of a real shut-down option during those critical late moments. He can move the puck with his wheels if necessary, but his pass deliveries always seemed quick, crisp, and with on-the-tape accuracy. That arena during the state competition was packed but the kid held up while operating under an intense spotlight. Anyway, he too will be developing at an area college, where Langenbrunner’s composed, cerebral style should help a Harvard defense that was hit hard by graduations.

This was more of a gift than a gamble, as Duran slipping into the late sixth was something I didn’t expect. In fact, I felt like I may have been underrating him with a ranking somewhere in the top 150. Nonetheless, Duran offers all the things you’d like in a later-round pick — speed, size, finish, and time. He’s going to a big-time program in Providence, which should work to strengthen Duran’s ability to impact shifts with physicality and aggressiveness of the forecheck.