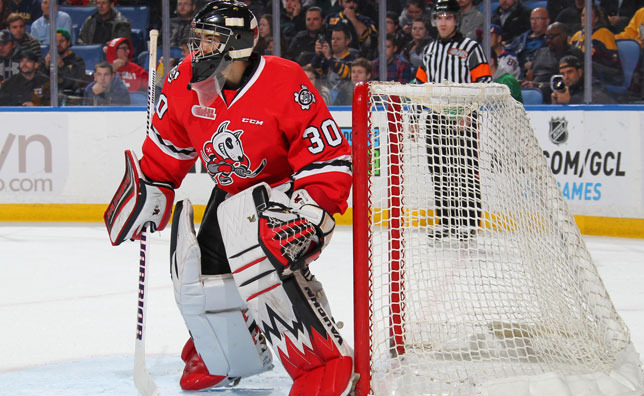 Calling this native Buffalonian a man on an island is a bit of an understatement — no CHL goalie can even fathom the kind of blitzkrieg Dhillon faces on a nightly basis. Want perspective? Not only did Dhillon lead all CHL backstops in shots faced (2312) and saves (2114), but the guy in second was almost 300 shots short of equaling him. Dhillion faced 40 or more shots in 28 of his 59 appearances, and only three times after playing a full contest did he see less than 30.

Dhillon is a big butterfly-style goalie who relies a ton on quickness and instincts rather than technical superiority and net awareness. But he’s so big and long, that all he really has to do is react for things happen to fall into place. He’s very aggressive and will push well out of his crease to push away screeners or attempted crease crashes. His stickhandling improved significantly from last year, and he was more active on dump-ins, probably because he knew a lengthy opposing possessing and net-area mayhem was going to happen regardless. Both his glove and blocker hands are quick, and his pad-stack technique is advanced for a teenage goalie.

Stephen Dhillon starts in goal tonight and he’s been HOT lately, stopping 84 of the last 88 shots fired his way pic.twitter.com/dVQFe6QmNh