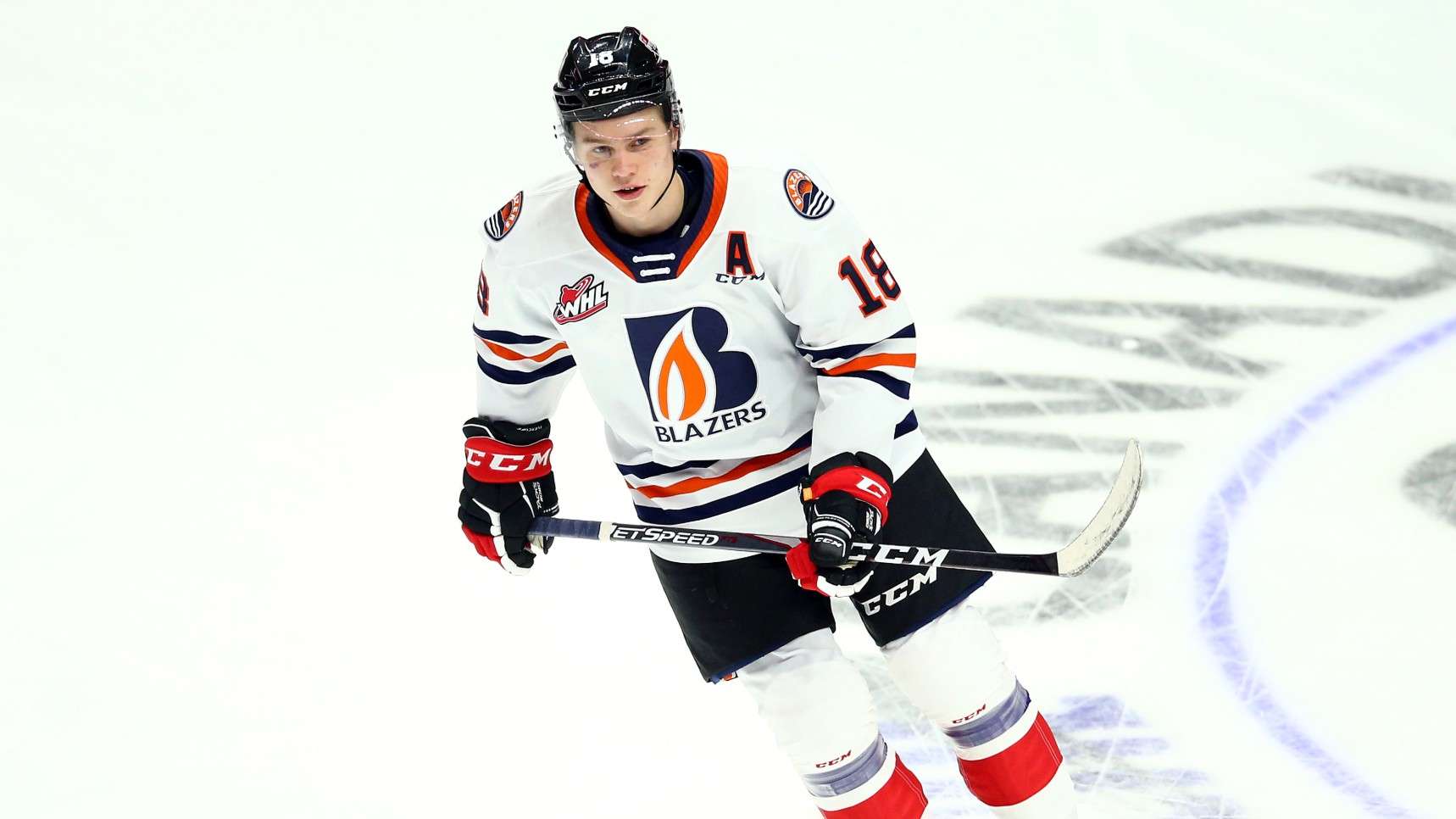 After trading back twice in the first round from pick No. 19 down five spots to 24, the Flames beefed up their 2020 draft class to a total of eight selections — their most since 2016 when they drafted Matt Tkachuk, Dillon Dube, and Adam Fox with three of their nine picks. Although they didn’t have the opportunity to draft a game-breaking talent in the first half of the first round, the selection of center Connor Zary at 24 plus the additional thirds got this draft starting on the right track for general manager Brad Treliving and scouting director Todd Button. Not only did the Flames do well for themselves with each of their three defensemen in Yan Kuznetsov, Jeremie Poirier, and Jake Boltmann , but they stayed on brand by going for their annual late-round uppercut with offensive-minded forward Ryan Francis. Overage goalie Daniil Chechelev is a big kid who was a young man on an island for most of last season on a young Russkie Vityazi squad, and winger Rory Kerins and overage defenseman Ilya Solovyov both played critical roles for their respective OHL clubs. They haven’t had many picks the last five or six years, but you can count on the Flames to add prominence to their prospect pool without the benefit of multiple high picks.

Trading down twice but adding two third-round picks and only sliding five spots in the process is a Day 1 win in itself, but the best part is that the Flames drafted one of the better centers available outside the top 11. It’s reasonable to believe their planned target was Dawson Mercer, who when selected by New Jersey at No. 18 likely triggered Treliving’s deal with Rangers’ GM Jeff Gorton that acquired New York’s 22nd and 72nd picks for his 19th. In Zary, they’re adding another asset to a sneaky-good prospect pool that will only get deeper with the four additional selections within the first 80 picks.

Drafted a full round ahead of where I felt he should go, Kuznetsov definitely checks multiple blocks when it comes to analyzing today’s modern-day defenders. He’s big and can skate; that much is obvious from the first shift you watch him. But the young Russian’s seamless transition to U.S. college hockey not pays tribute to his adaptability and maturity, but also his consistency. UConn used him as a stopper in most critical situations, and Kuznetsov proved to be quite dependable at stickhandling and getting the puck across center.

I loved this move, not only because Poirier was one of the top remaining first-round talents, but also because he was used with the extra pick acquired from New York in the aforementions Day-1 deal. Poirier easily stands as one of the top playmaking “offensemen” in the draft, and let’s not forget that this is around the spot where the Flames took puck rusher Adam Fox (66th overall in 2016). We’ll never know if Calgary coveted defenseman Braden Schneider the way the Rangers did at No. 19, but 10 times out of 10, I’m trading that opportunity for a Zary-Poirier combination without batting an eye.

The selection of Boltmann perplexed me for a split second since he went a good round or two higher than I thought and a higher-rated Minnesota high schooler in Wyatt Kaiser was still available. But it didn’t take long for it to dawn on me that Boltmann’s speed and physicality from the back end was something few of the defenders in the remaining tiers offered. In fact, you would have to go all the way to the Kings’ selection of Ben Meehan in the fifth round to find a hard-hitting blueliner who could move as well as Boltmann — a multi-sport star for Edina and a key recruit for the University of Minnesota. Considering they already drafted puck managers in Kuznetsov and Poirier, choosing Boltmann adds toughness to their 2020 class of blueliners.

Quite frankly, this was a random pick from a consensus standpoint. I saw Vityazi a ton last year because of centers Kirill Kondyrev and Ivan Zinchenko, and I viewed Chechelev as nothing more than your average overage No. 1 MHL goalie; albeit one on the bigger side. The Flames have their reasons, I’m sure, as they definitely talked to the kid and his coaches to get an idea of what he’s like away from the ice. In terms of style, Chechelev is a typical butterfly goalie who stays close to the net and uses an RVH while limiting the amount of times he spends on his pads. He’s a little jittery in the crease but it seems to work for him, and you never get the impression he’s lackadaisical or grows tired cycling though various movements and positions. If there was one selling point I could point to, it’s probably his angles or net awareness — he gives shooters very little room in the upper half and does so while crouching low and staying inside the blue paint. After that, there isn’t much separation from the rest of the MHL pool but Chechelev at a minimum will be involved in a string of critical games as Vityaz challenges for first in the Western Conference.

As mentioned in the opening, Francis is a fancy player with speed who not only can deliver highlight-reel plays, but backed it up with a team-best 48 assists for Cape Breton. Some might say he benefitted from sniper Egor Sokolov’s ridiculous season, but the line was formed early last season and Francis deserves credit for playing well enough to keep his job. He’s a slick stickhandler and makes precision timing plays off the cycle. For whatever reason, he’s listed as a winger everywhere, but he most definitely was the Screaming Eagles’ top-line center practically from wire to wire.

I viewed Kerins as the kind of kid who will always get drafted simply because he filled several critical roles as a first-year eligible on a high-profile team loaded with firepower. Of course, that firepower was on the greener side of recent Soo rosters, with 11 of their top 13 scorers no older than 18 years old. Still, Kerins not only produced like an on-ice leader, but he also acted like one. Add him to the list of eventual prospect-camp participants whose hard work should put most of the heralded names on notice.

Solovyov got off to a red-hot start with 26 points in his first 22 games before slowing down significantly in the second half. But point production doesn’t tell the whole story of a rookie import from Belarus who assumed a top-four job and kept it as the Spirit raced towards back-to-back West Division titles. He was a staple on the power play and contributed both on and off the puck. Solovyov can be physical and win positioning battles in front of the net, but he also uses a quick stick and will jumpstart an attack that he can either start or finish.