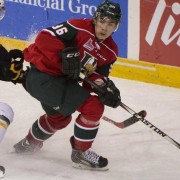 Timo Meier
Position: Right Wing
Shoots: Right
Height/Weight: 6’1″ 209 lbs
Born: October 8, 1996, Herisau, Switzerland
Central Scouting Rankings (Prelim/Mid/Final):  “B” / 12th NA / 10th NA
Summary: A tremendous, well-built athlete who is a bit of a throwback, Meier is a gifted goal scorer; a no-nonsense shooter with a pro release. What makes him enticing as a prospect is the way he combines a goal-scorer’s touch with calculated physicality. He’s been likened to a wrecking ball on skates for the way throws his weight around and delivers punishing hits; his powerful stride and ability to pick up speed while bearing down on a prospective target makes it difficult for opponents to complete plays. He has very good hands and vision, and can quickly determine when the window to drive to the net for a quality chance has closed. That doesn’t necessarily mean it will stop him, as Meier can angle into a defender and establish positioning while controlling the puck en route to the toughest scoring areas of the offensive zone. Of course, that will change when he plays against adults, but he has shown an adaptability towards the changing nature of a given game. He is a relentless forechecker and loves to fight for the puck. He may not do it at full speed every time, but there’s an intimidation factor inherent in his on-ice presence. Offense, however, is his calling card, as we’re discussing a player who had a 27-game points streak in the QMJHL and has scored goals in bunches — he had a monster November of 11 goals and 21 points in just 12 games. Meier is very difficult to dislodge off the puck, and is even tougher to move from in front of the net. He uses his size and strength in every in-game situation regardless if it is warranted or not. This kid will never back down, and responds to both direct and indirect provocation. Could turn out to be the draft’s best goal scorer when hindsight is eventually applied. 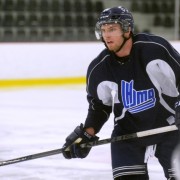 Jeremy Roy
Position: Defenseman
Shoots: Right
Height/Weight: 6’0, 188 lbs
Born: May 14, 1997, Longueuil, QC
Central Scouting Rankings (Prelim/Mid/Final): ”B“/ 23rd NA / 21st NA
Summary: Possibly the draft’s best (and most polished) defenseman after the Hanifin-Provorov-Werenski troika, Roy has to be considered a steal after he landed with the Sharks almost a round’s worth of picks lower than we anticipated. Describing Roy’s without a steady of dose of game-related platitudes is simple. Maybe that’s because his yeoman-like approach to the game doesn’t leave you thirsting for more — what you see is what you get, and satisfaction is the general outcome. At the same time, however, you kind of have to ask yourself if this kid is really the best defenseman the “Q” has produced in quite some time. If you never heard a thing about him and viewed his game objectively, you could see that he isn’t your cookie-cutter mobile blueliner. Roy is an intelligent defender who is very effective at positioning himself to make high-percentage plays. He’s not physically overpowering, but Roy has the on-ice IQ to neutralize a cycle without the intimidation or fear factor. Yes, he’s a puck mover who has a little bit of flash, but he only displays it when he has to. Rarely do you see Roy caught out of position, and every movement — laterally included — is coordinated, right down to his pivots. He is a very clever puck distributor and does not like to rush things, and though he can be classified as a power play quarterback, his ability to slow the game down to a controlled and manageable pace is what makes him unique for an offensive-friendly circuit like the QMJHL. Roy has NHL-caliber anticipation and his hockey sense is evolving, especially on the defense side where his hard work at using his stick and angling opponents into low-percentage positions made him a more complete player. Maturity can be a heck of an attribute for  a teenage defenseman, and Roy is no different from the handful of peers who will be selected alongside him in the first round. Does he have unlimited potential as a point producer? Absolutely. He is more likely, however, to develop in a quiet, dependable two-way rearguard who can be used in any game situation.

Mike Robinson
Position: Goaltender
Height/Weight: 6’3, 195 lbs
Catches: Left
Born: March 27, 1997, Bedford, NH
Central Scouting Rankings (Prelim/Mid/Final): NR/ 16th NA/ 8th NA
Summary: A solid netminding prospect who somewhat surprised us by being picked in the third round. While he deserves a pat on the back for carrying a Lawrence squad with only five seniors at the varsity level and an anemic offense to boot, he got into a bad habit of letting small deficits turn into laughers by letting in some weak goals from bad angles and distance. And while he’s received mentorship from a pretty solid group of netminding gurus, he should continue to work with them on his positioning and keeping his emotions in check. His size and upside make him an NHL consideration, but we look at him as a kid who was rewarded for seeing lots of rubber on a bad team. He’ll play for UNH in 2016-17, but pay attention to his last year at Lawrence, which is expected to be a better team next season.

Adam Helewka
Position: Left Wing
Height/Weight: 6’1, 201 lbs
Shoots: Left
Born: July 21, 1995, Burnaby, BC
Central Scouting Rankings (Prelim/Mid/Final): NR/ NR/ NR
Summary: Nearly a double-overager who wasn’t even a Bantam Draft selection, Helewka produced an outstanding (and obviously expected) wire-to-wire campaign for Spokane while playing on its top line with 2017-eligible Kailer Yamamoto. And while he’s got power forward strength, a great shot and produced with staggering consistency, we view him as a kid who simply took advantage of being older in a circuit he knew like the back of his hand. He’s far from one-dimensional, and scoring 44 goals in the WHL certainly got him points (no pun intended). The Sharks have now drafted three WHL forwards over the last two drafts after just four between 1999 to 2013 combined. Two of those four were double overagers — Frazer McLaren and Ashton Rome.

Karlis Cukste
Position: Defenseman
Height/Weight: 6’2, 203 lbs
Shoots: Left
Born: June 17, 1997, Riga, Latvia
Central Scouting Rankings (Prelim/Mid/Final): NR/ 90th Eur/ 100th Eur
Summary: Not many Lavians have or have had NHL notoriety. But two of the more prominent figures in Latvian hockey — Arturs Irbe and Sandis Ozolinsh — are names definitely synonymous with San Jose’s immediate post-expansion success in the mid-1990’s. Cukste, who like the aforementioned Ozolinsh played for Riga Juniors, is a silky-smooth two-way puck rusher who played on Latvia’s top pairing at the 2015 U18’s and displayed keen vision and confidence. He’s a bit of a liability defensively, and you’d wish he utilized his pro-style wrist shot more often (only 68 shots in 58 MHL games). But the Sharks, among others,  were clearly impressed with his play at the U18’s.

Rudolfs Balcers
Position: Left Wing
Height/Weight: 5’11, 165 lbs
Shoots: Left
Born: April 8, 1997, Liepaja, Latvia
Central Scouting Rankings (Prelim/Mid/Final): NR/ NR/ 80th Eur
Summary: Another obscure European who came to life at the U18’s, teaming with fellow 2015 draftee Martins Dzerkials (Maple Leafs) to produce most of Latvia’s fine (yet rare) moments in the tournament. He was a bit of a role player as a teenager on a veteran-heavy Stanvanger club (Norway), so you’d like to think the Sharks will try to get him to North America as soon as possible to mitigate the risk of him fleeing to the KHL like his fellow countryman Dzerkials. Balcers has great hands and a quick release, and in our limited viewings came across as a speedy possession-type of player but with underrated finishing abilities.  You just wish he shot the puck more.

Adam Parsells
Position: Defenseman
Height/Weight: 6’5, 190 lbs
Shoots: Right
Born: January 3, 1997, Wausau, WI
Central Scouting Rankings (Prelim/Mid/Final): “C”/ 105th NA/ 94th NA
Summary: Towering static defenseman who is expected to play his first full USHL season with Green Bay in 2016 before hiking on over to Madison to play college hockey for Wisconsin. Parsells was ranked pretty high for a player who has yet to provide an inclination for offensive/puck-possession hockey. That is unless you consider his fire-and-forget point shots as critical towards a puck-hounding strategy. Sometimes that could be a good thing for a young defenseman like Parsells, who doesn’t fool around with the puck and plays an extremely safe (and somewhat bland) game from the backend. We’ve yet to see him use his size and strength as intimidation tools (albeit in limited viewings), so both Wisconsin and the Sharks have their work cut out for them.

Jake Kupsky
Position: Goaltender
Height/Weight: 6’5, 210 lbs
Catches: Right
Born: September 27, 1995, Waukesha, WI
Central Scouting Rankings (Prelim/Mid/Final): NR/ NR/ NR
Summary: Chalk up Kupsky’s selection as one of those “oh-by-the-way…” picks teams tend to make when they go scout somebody and wind up liking an entirely different prospect. The NAHL is not an offensive-geared circuit, no take his above-average stats (2.16 GAA/.911 SVPCT) with  grain of salt. The Union College-bound netminder is obviously a big kid and takes up most of the net, and although he goes down way too early, he’s got a quick enough glove and blocker hand to limit real estate up top. Side-to-side movement is above average, and from what we can tell, he’s one of those butterfly-types who shows you a ton but seals everything up in a hurry.