The Draft Analyst’s Rankings: The top 250 prospects for the 2016 NHL Draft (January) 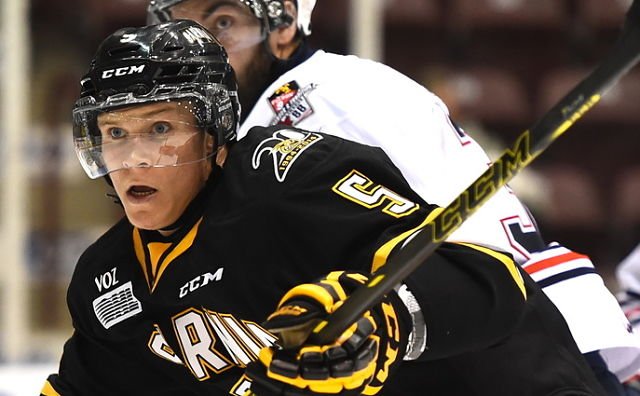 Draft lists across the globe were somewhat altered after several performances at the recent Under-20 world junior championship. And as exciting as the on-ice play may have seemed, we simply don’t think  a week’s worth of hockey over Christmas break is enough to challenge an analyst’s pre-tournament opinions of upper- echelon prospects. So no, right wing Jesse Puljujarvi’s dominant WJC was not enough to offset his intermittent slumping in Liiga play and move up from his No. 5 rank. And yes, Jakob Chychrun (ranked No.2) and his omission from Team Canada doesn’t change the fact that he’s not only the draft’s top all-around defender, but someone we view as the only player to challenge center Auston Matthews (No. 1) for the quickest path to the NHL.  Wingers Patrik Laine (No. 3) and Matt Tkachuk (No. 4) were impressive at  the U20’s, playing with an edge and using underrated playmaking abilities to augment their elite shots.

Notable prospects who impressed without the benefit of the WJC spotlight include London left wing Max Jones (No. 15), who blitzed his way up the lottery after he helped carry a depleted Knights roster. Guelph’s goal-scoring power winger Givani Smith (No. 33) continues to impress on a terrible team, and Finnish imports Otto Makinen (No. 41) and Janne Kuokkanen (No. 47) are wearing out the U18 international circuit. The USHL had several big-bodied forwards blessed with mature builds and power-skill combinations perform at the recent Top Prospects Game, namely forwards Cam Morrison (No. 46), Willie Knierim (No. 91) and Ross Colton (No. 111), and big-bodied centers Matt Filipe (No. 61) and Michael O’Leary (No. 102). Chicoutimi rearguard Frederic Allard (No. 53), a powerful right-handed gunslinger who runs the power play and has leadership attributes, was surprisingly uninvited to the CHL Top Prospects Game, later this month in Vancouver. And feisty Quebec center Matt Boucher (No. 79) has been on a season-long tear, which increased in ferocity after top winger Dmytro Timashov was traded.

We hate to ding a kid for being injured, but Vancouver center/wing Tyler Benson (No. 21) is on the shelf for a second time this season, and his timetable to return is up in the air. We still view him as a potential lottery pick (we ranked him 12th last month), and he was playing like one after returning from offseason surgery. But it looks like he hurt his groin while playing the best hockey of his young career, so it’s not fair to rank him ahead of others who compare in skill but are healthy enough to display it. He’s still a stud, however, and has plenty of time to make up for games lost. Others who have slipped a bit include OHL Russian import Dmitri Sokolov, who is simply too inconsistent to be the impact player we thought he’d be. And add Halifax’s Otto Somppi to the list of those slogging through the winter months, as he’s playing uninspired hockey and looking more one-dimensional than before.

Below is a sortable table of The Draft Analyst’s January rankings of draft-eligible prospects. Players born between 01 January 1996 and 15 September 1997 are considered “overage” draft candidates who were once eligible for either the 1996 and/or the 1997 NHL Draft, and are identified in this list with an “OA” following their full name.