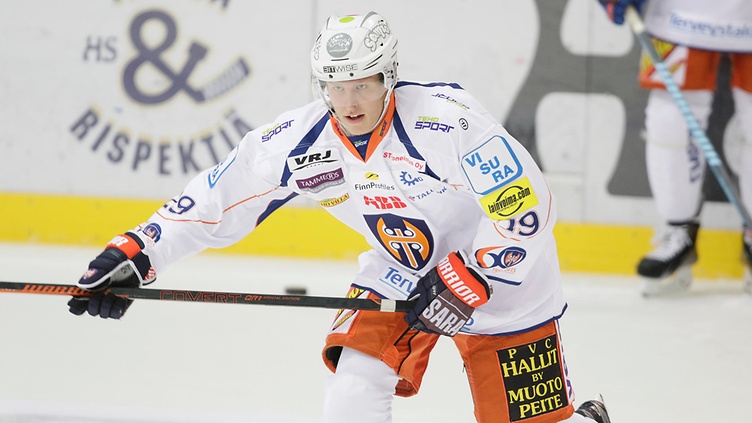 Position: Right Wing/Left Wing
Shoots: Right
Height/Weight: 6’4 206 lbs
Born: April 19, 1998, Tampere, Finland
Obtained: Signed with Tappara’s U16 club in 2012.
Notes: 2015-16: Named Liiga playoff MVP for Tappara as he led the circuit in postseason scoring with 10 goals and tied for third with 15 points, leading his club to the league crown…Led Finnish League rookies in scoring during the regular season with 17 goals and 33 points in 46 games…Placed third in tournament scoring at the 2016 IIHF under-20 world junior championship with 13 points in seven games to help the Finns win the gold medal…scored a goal in four straight games and points in five straight between 16-29 September…Tallied twice in three games for Team Finland at the 2015 U20 Four Nations Tournament in Tampere…Scored two goals and added two assists as Tappara went 4-0-1 to advance to quarterfinals in 2015 Champions Hockey League…2014-15: Loaned from Tappara to LeKi (Mestis), where he appeared in 36 games…Produced dominant performance at the 2015 U18 World Championship, where he scored eight goals and added three assists in seven games, leading Finland to a silver medal…Split nine games for Tappara between Liiga (0-1-1, 6 gp) and Champions Hockey League (1-0-1, 3 gp)…scored a goal in three games for Team Finland at 2015 Ivan Hlinka Memorial Cup before being kicked off the team for disciplinary reasons…2013-14: Finished fifth in Jr. A AM-Liiga in goal scoring (26) despite being 15 years old for most of the season…Led entire U17 Five Nations Tournament in scoring with eight goals and three assists in four games – four points more than Team USA C Auston Matthews (1-6-7, 4 gp)…Selected in the first round (24th overall) by the Sarnia Sting in the 2015 CHL Import Draft…Selected in the 2nd round (36th overall) by Dynamo Riga in the 2015 KHL Draft.

One of the telling signs of maturity is how one deals with adversity, specifically when it’s admittedly self-inflicted. It was just over a year ago when a frustrated, 17-year-old Patrik Laine flipped Finland’s National Team coach Mika Marttila the bird during a game against the Czechs. He also reportedly issued him physical threats, thus leading to his expulsion from the 2015 Hlinka tournament after only three games. Since then, however, he’s done nothing but crush the opposition while maintaining a seemingly mature outlook and approach. Laine’s become the best power winger prospect in the Finnish Elite League, and all before his 18th birthday. He’s a big-bodied scoring threat with a devastatingly accurate wrist shot and a penchant for eluding detection, so when you combine the two, you get the desired result. From a skating perspective, he’s shown an improved stride, which allows him to go zone-to-zone in a hurry. But what’s been most impressive about his Liiga campaign beyond burying the puck has been the accuracy of his passes off the rush. Laine’s been dominating both his peers and those slightly senior in age for a while now, and by that we mean both physically and statistically. And though he was slotted behind countryman and fellow-2016 draft eligible Jesse Puljujarvi in most pre-season draft rankings, his early-season domination of a men’s league coupled with the aforementioned Puljujarvi’s concurrent struggles should continue to shift pre-draft rhetoric towards Laine’s corner. We think he’s the best winger in the draft, and the closest among any amateur draft prospects to becoming a regular in the NHL.