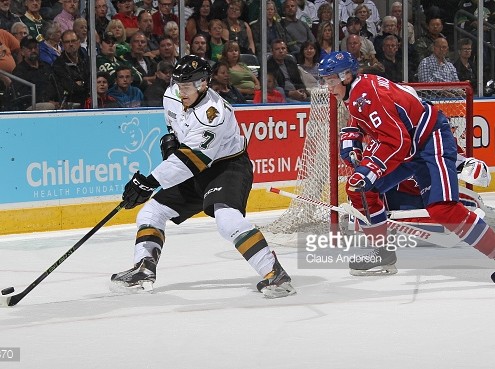 Position: Left Wing
Shoots: Left
Height/Weight: 6’1 194 lbs
Born: December 10, 1998, St. Louis, MO
Obtained: Signed with the London Knights on May 8th, 2015 after they selected him in the fourth round (64th overall) in the 2013 OHL Priority Selection.
Notes: 2015-16: Finished tied for second in the OHL with 77 assists and placed fifth in points with 107…Tied Auston Matthews for team scoring lead with 11 points in seven games to help Team USA capture the bronze medal at the 2016 IIHF under-20 world junior championship…Led Team USA in scoring at 2015 World Junior Championship Evaluation Camp in Lake Placid, NY with five goals and three assists…Played in the 2015 All-American Top Prospects Game…2014-15: Finished second in scoring on the USNTDP U18 team with 38 goals and 57 assists, including a team-high 119 penalty minutes…Tied teammate RW Jeremy Bracco (TOR) for a tournament-best 10 assists in seven games (2-10-12) to help lead Team USA to gold at the 2015 IIHF U18 World Championship…Tallied two goals and four assists in four games to tie RW Jack Roslovic (WIN) for team lead in scoring as Team USA’s U18 squad placed second at the 2015 U18 Five Nations Tournament in Kravare and Poruba, Czech Republic…His 79 career assists are seventh-highest in USNTDP history, while his 58 assists and 96 points in 2014-15 are the third and fourth highest single-season output, respectively…2013-14: Finished 10th in scoring on the USNTDP U17 team with 13 goals and 19 assists in 53 games…Tied for 10th in tournament scoring (4-3-7) to help Team USA win the World Under-17 Hockey Challenge title in Sydney, Nova Scotia…Scored two goals and added two assists in four games as team USA captured 2014 U17 Five Nations Tournament in Sundsvall, Sweden…Did not register a point in four games at 2013 U17 Four Nations Tournament in Prievidza, Slovakia, where Team USA finished first…Previously committed to the University of Notre Dame…Son of former NHL all-star Keith Tkachuk…Played for the St. Louis Blues’ junior hockey program, where he led his team to the 2012-13 Tier 1 Elite Hockey League title.

In this forceful, rigid yet graceful sport, there are few who possess a diverse resume of skills necessary to display a consistent level of dominance practically on a shift-to-shift basis. Terms like “the complete package” are often used to describe these rare birds, and as cliche as it sounds, it certainly is the best way to sum up players like Matt Tkachuk. Born and reared in the St. Louis area’s under-appreciated hockey environment, Tkachuk, in reality, could have trained anywhere when you consider the mentorship he received right in his own home. And while his father Keith — close to a decade removed from an all-star NHL career — has left a huge imprint in both the looks and skills department, we view Matthew as a bit more patient and decisive with both his strength and his playmaking ability. The kid doesn’t have a glaring weakness, and while some may point to skating, he has a long and powerful enough stride to win the occasional footrace. And even the roadrunner types who can catch up to his up-the-ice attacks are generally limitless in preventing him from doing what he wants or needs to do. Tkachuk has a very heavy and accurate shot which can change speeds and confuse goalies, but his penchant for delivering scoring-chance set-ups at the very last moment is yet another reason why he’ll be so coveted come Draft Day. Throw in leadership qualities and a desire to make opponents pay the price physically, and you have the makings of the best pure power forward prospect available for the 2016 draft.