Photo courtesy of the Sarnia Sting 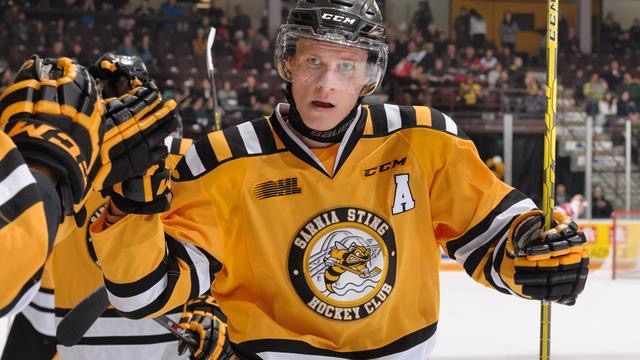 Position: Defenseman
Shoots: Left
Height/Weight: 6’2 214 lbs
Born: March 31, 1998, Boca Raton, FL
Obtained: Selected by the Sarnia Sting in the first round (first overall) in the 2014 OHL Priority Selection.
Notes: 2015-16: Finished fourth among OHL defensemen with 49 points in 62 games…His 199 shots ranked third among OHL blueliners…Had 12 games of firing at least five or more shots… Registered a goal and three assists in seven games for Team Canada at the 2016 IIHF under-18 world championship…His 27 shots ranked second on the team…Played for Team Cherry at the 2016 CHL Top Prospects Game2014-15: Named a finalist for OHL’s Rookie and Defenseman of the Year after leading all first-year blueliners with 16 goals and was second among freshman rearguards with 33 points…Was also named an OHL Third Team All Star, and was Sarnia’s choice for the league’s top player…Missed 26 regular season games and all five of Sarnia’s playoff games due to a nagging shoulder injury, which also kept him out of the both U17 and U18 World Championship, and the 2015 Ivan Hlinka…Named OHL Rookie of the Month for January after he registered five goals and six assists in just 12 games…2013-14: Missed 4-6 weeks, including OHL Cup after suffering a shoulder separation during Greater Toronto Hockey League championship..

Only a few of the strongest draft-eligible prospects possess the type of skill to impact the game in all three zones, and by impact we mean significantly alter the course of a given game. Jakob Chychrun, Sarnia’s towering blueliner who last season quickly established himself as one of the OHL’s most complete players, is in our view a cornerstone defender with star potential, and the best blueliner for the 2016 draft. He can beat you inside and out, skate through you or around, and either nail you to the boards or laughingly absorb a hit at full speed. He can easily be classified as a two-way defender, but what makes him unique among his peers is the way he equally divides his elite play in accordance with the game situation. Chychrun’s NHL bloodlines (father Jeff was an NHL defenseman) and God-given physical attributes presents opponents  with a tough matchup on paper, but his ability to think the game at an extremely high level is what makes him such a tantalizing prospect. And while injury is an inevitable part of the game, the ability to rebound and perform and produce on a consistent basis is generally what separates the stars from the pretenders.

When he’s defending from the circles and below, he possesses the uncanny ability to successfully differentiate between when to pressure the opposing puck possessor and when to support the friendly. When defending the rush, he has an active stick that can fix an oncoming rusher into no man’s land, and he’s lightning quick on the loose pucks he creates to quickly (and we mean quickly) transition up the ice with speed. He’s a hard and accurate passer, and owns a heavy shot that he can launch over shot blockers after walking the line for an open lane. Chychryn is perhaps a complete version of former top pick (and OHL’er) Aaron Ekblad, and in that we mean both offensively and defensively. And while Chychrun’s invincibility coming into question before the age of eighteen is certainly reason for concern, we view him as the clear-cut top blueliner available in 2016.