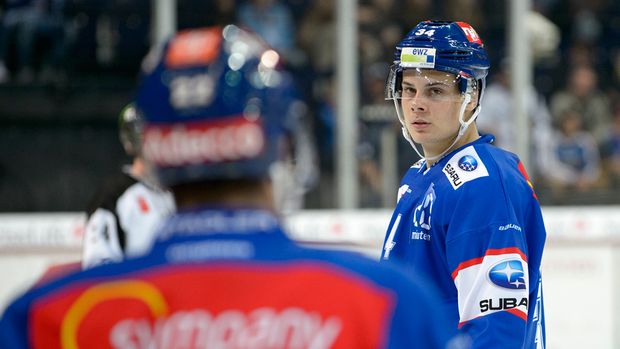 Position: Center
Shoots: Left
Height/Weight: 6’2 196 lbs
Born: September 17, 1997, Scottsdale, AZ
Obtained: Signed with ZSC Lions (Switzerland) on August 7th, 2015
Notes: 2015-16: Named the runner-up for Most Valuable Player in the Swiss National League (NLA) after leading the circuit in goals-per-game (0.67) and finishing 10th in scoring with 24 goals and 22 assists in just 36 games…Led Team USA to the bronze medal at the 2016 IIHF under-20 world junior championship with a team-best 11 points in seven games, tying him for fourth in tournament scoring…2014-15: Led the U18 NTDP with 55 goals and 61 assists for 116 points in just 60 games to break Chicago Blackhawks star Patrick Kane single-season NTDP record of 102, which he set in 2005-06…Named MVP of 2015 IIHF U18 World Championship after he led the tournament in scoring with 15 points (8 goals, 7 assists) for the second-highest output in tournament history behind Phil Kessel’s 16 in 2006…Was youngest player to be named to Team USA’s entry at the U20 WJC, where he tallied a goal and two assists in five games…Made history when he became first pre-draft player to play for Team USA at the World Championships when he appeared in an exhibition game against Austria, scoring a goal in the process…in Missed 2015 draft eligibility by two days, yet was considered a possible lottery pick had he been available… 2013-14: Suffered a lower body injury which cost him first 20 games of season…Finished with 24 goals and 26 assists in 44 games…Combined for nine goals and six assists in 13 games between the 2014 World U17 Hockey Challenge and the U18 World Championship, winning a gold medal at each event…Selected by the Everett Silvertips in the third round (57th overall) in the 2012 WHL Bantam Draft

Inspired by the oft-overlooked hockey community ensconced within America’s southwestern desert, the Arizona-born Matthews is a feel-good hockey story on many levels. And though he is certainly destined to influence the sport’s growth in the region, the question is simply whether he’ll do it directly or indirectly. Yes, Matthews is the likely top pick in next year’s draft, and it’s a good bet his hometown Arizona Coyotes will have no problem finishing next season with the best chance to land him. And why not? He’s a generational, franchise-changing prospect who nearly hit the 200-pound benchmark right around the time he turned 16. But size and strength do not define what Matthews brings to the ice every night. He is a ridiculous playmaker and puck possessor, shifting and twirling around defenders who at times will both be within inches of the puck. Matthews comes from good stock – his uncle, Wes Matthews, was a football star in Oklahoma and earned a brief appearance for the Miami Dolphins in 1966. But his vision and hand-eye coordination while wearing skates are things he focused on, to the point of having an unparalleled ability to corral pucks out of midair and nestle them softly onto his stick. Matthews’ decision making is off the charts; he can be used in different scenarios, but he’s at his best when he’s picking apart small gaps in passing and/or skating lanes below the opposing blue line. He’s also a no-nonsense shooter with a quick release, but not at the risk of wasting a better opportunity. Matthews will hold onto the puck for an eternity, but in his case, it’s a good thing thanks to exceptional balance, footwork and stickhandling. Clearly the best forward prospect among his draft-eligible peers, and is so for many reasons.