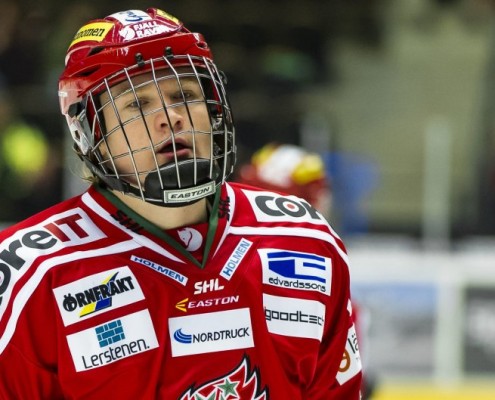 Top Performer(s): LW Carl Grundstrom (2016) and C Chris Mastomäki (2016) alongside RW Axel Ottosson (2016) formed Sweden’s best line, combining for eight points in three games, with the 17-year-old Grundstrom netting points in all three contests thanks to relentless forechecking and Johnny-on-the-spot awareness. Mastomaki is a big center who wore defenders down while using his reach and leg strength to cause match-up problems in the low slot and crease areas. LHD Oliver Kylington (CGY 2nd/2015) was absolutely stellar in all three zones, leading all tournament rearguards in scoring with a goal and three assists. He not only displayed confidence and physicality, but took a take-charge attitude when ragged play was the norm. Even with his world-class skating abilities, however, he is prone to getting caught up ice. But unlike his last few international performances, paying for his risks was the exception and not the rule.

Key Moment: Sweden tried all it could to build a lead against the Finns, but Finnish G Joona Voutilainen (2016) put on a show for the first 40 minutes as Tre Kronor went into the third period trailing, 2-1. Already stuck behind a disappointing 5-3 loss to Russia the night prior, Sweden finally broke through when Mastomäki scored to force the extra session, where it handed Finland its only loss of the tournament thanks to a winning shootout goal by RW Robin Kovacs (NYR 3rd/2015).

Who Impressed: Kovacs also scored a clutch goal in the 4-3 win over the Czechs and led the entire competition with 15 shots on goal. He also contributed on special teams, acting as a key cog on Sweden’s penalty kill, which killed eight of nine power plays against. LW John Dahlstrom (CHI 7th/2015) may have been the last player chose in the 2015 NHL Entry Draft, but he certainly didn’t play like a kid who was picked so low. Both players were used together at times, providing the Swedes with energy and creating chances off turnovers they forced.

Who Disappointed: RHD Jesper Lindgren (TOR 4th/2015) may have been added to the roster by default, but we still expected more from him in terms of making plays after he created time and space with his mobility. He’s undoubtedly a gifted skater and made subtle yet important plays to beat pressure. But the Four Nations was far from a “Who’s Who” of amateur stars, meaning we wanted to see him take advantage of his peers. It seemed like Kylington did enough for the both of them. 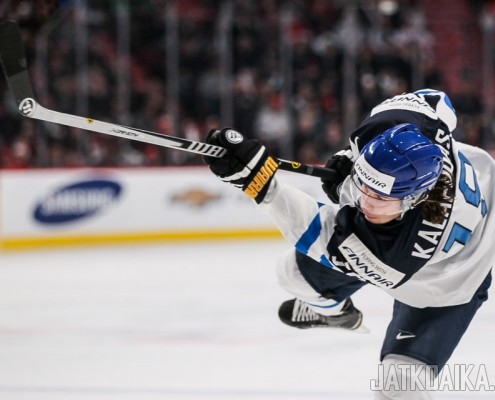 Top Player: C Antti Kalapudas (2016) was no stranger to international competition before he arrived at Dmitrov, but it was his first time anchoring Finland’s top line as their go-to playmaker. Kalapudas, who’ll make his Liiga debut for Karpat later this month, was clearly the tournament’s best forward, tallying four goals and two assists in three games while showcasing world-class vision and a lethal shot. And although he was skipped over the last two drafts, he is a possession darling who always seemed to be in the right place and making quick decisions with the puck. There’s always the possibility that his slight frame (6’0/165) will make him a mainstay within European leagues, but a solid season in Finland’s elite senior circuit and adding some muscle could make him another overage candidate we’ve seen NHL clubs take fliers on the last few drafts.

Key Moment: Winning a tournament without a decisive championship game to determine an indisputable victor usually requires taking advantage of opportunities and finding a little bit of luck. In the second period of final game against Russia, the Finns did both, first by scoring a quick goal off a faceoff (Kalapudas) and then getting the eventual game-winner off a booming shot from LHD Anton Nyyssonen (2016) right after they killed off two critical penalties. It certainly helped that Russia was forced to play without star RW Denis Guryanov, but Finland deserved taking home the title regardless, going 2-0-1 and yielding a tournament-low five goals in three games.

Who Impressed: LHD Jesper Mattila (2016) is a 1997-born blueliner who looked more confident as a 17-year-old playing against U20’s at the Four Nations than he did as a 17-year-old against U18’s in Switzerland five months earlier. A puck mover/risk-taker for Ilves’ J20 team a year ago, he played a well-rounded match against Russia by opting for positioning over being opportunistic up the ice. In his case, it’s a good thing, as he displayed the ability to win both 50/50 and board battles, and respect the importance of slot coverage. We knew he can move the puck. Now we know he can defend and buy into a prevent-then-counter strategy as well. Up front, we liked the motor and fearlessness displayed by 19-year-old C Miika Pitkanen. Granted, he’ll be 20 in April, but he certainly had the look of a kid who finished eighth in Finland’s U20 league scoring (19-40-59 in 42 games). G Joona Voutilainen (2016) displayed the quickness and technical skills missing from his brief yet horrific mop-up experience in the 2014 U18’s. He’ll join Jokerit (KHL) where he’ll likely serve as the backup.

Who Disappointed: Finland went with a new-look U20 squad at Dmitrov after stockpiling their best U20 talent at the WJC camp earlier in the month. So in a way, the Finns finishing tops among the four countries with what was essentially a “B” team speaks volumes on how far Finnish player development has gone since the dark days of the late 2000’s. RHD Veeti Vainio (CBJ 5th/2015) logged top-pairing minutes but wasn’t his usual aggressive self in the win over Russia, which could have been fatigue from three games in three nights. 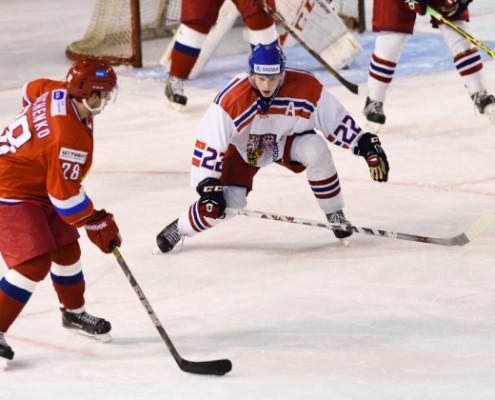 Top Player: When you talk about skills most likely to translate to the NHL game, LHD Yegor Rykov (2016) should be at the top of any pre-2016 draft list for two-way defensemen. He was looked over in what was his first draft-eligible season, which sort of surprised us when you consider how solid a season he had running a gauntlet of international competition. In Dmitrov, he was super silky on the puck; moving it with confidence via skate or pass. And although his Russian brethren seemingly struggled while not displaying much of an identity, it was the aforementioned Rykov who offered them consistency and reliability in his own end. We’ve seen Russian national teams struggle when they are playing in front of a home crowd, so the pedestrian 1-2-0 finish (with just one goal in the final two games) came as no surprise. What also wasn’t surprising was that Rykov established himself as a real leader on a blueline with older players.

Who Impressed: C Ivan Igumnov (2016) and RW Kirill Pilipenko (2016) displayed chemistry throughout the brief tournament, with each player displaying individualistic-yet-sound rushes up the ice. Igumnov scored the lone goal for Russia in a 3-1 loss to Finland after he blew past opponents down the wing before cutting towards the cage and finishing the play with a nifty deke. Pilipenko, who like Rykov was mocked by us in June as late seventh rounders in 2015, plays the off-wing and can really make you pay if your defensemen are struggling with their gaps. Both are draft eligible for 2016.

Who Disappointed: C Mikael Vorobyov  looked disinterested and lost after a solid performance in the openening win against Sweden. And while he’s not a dynamic, game-changing kind of talent, his work away from fellow 2015 dratee RW Denis Guryanov (DAL 1st/2015) was not only bland, but borderline inexcusable at times. It got to the point where he didn’t even see the ice for most of the third period in a 3-1 loss to Finland. Nobody was expecting Vorobyov to dominate this event. The lack of effort and inability to generate much on offense for two straight games, however, were somewhat surprising. 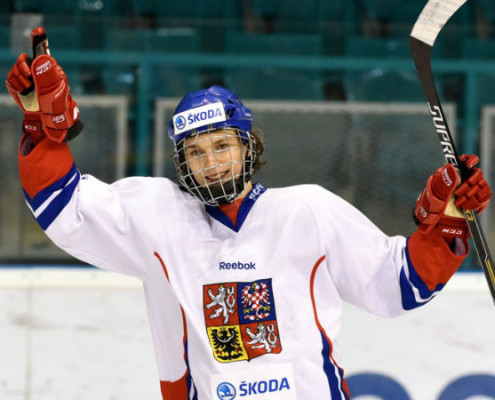 Top Player: The Czechs generally display an aggressive and imaginative offense, and no player singularly personified the trend than LW Lukas Jasek (VAN 6th/2015), who carried not only the top line, but was the team’s most consistent and dynamic performer. Jasek’s pre-draft knock had been shift-to-shift consistency, but we saw a solid effort on most shifts and a penchant for creativity and momentum-changing plays. While we knew he had a scorer’s touch and an explosive first step, we were most impressed by his ability to drop his shoulder and beat defenders to the outside while taking the shortest possible route to the net. The 5’11 winger was relegated to depth duty at the WJC exhibition camp earlier in the month but obviously played his way up a relatively watered-down Czech depth chart. With strong showings in back-to-back international events and a post-tournament top-9 role with the Extraliga’s Trinec squad, we expect Jasek to be a difference maker for the national team in Helsinki come December.

Key Moment: The Czechs were up 2-0 in the second period of their final match against Sweden when a pair of seemingly harmless matching roughing minors created some open ice and some back-and-forth action. The Swedes, however, scored three unanswered goals in a seven minute span after the penalties expired to take a 3-2 lead into the third period of their eventual 4-3 win. Had the Czechs held on to win, they would have finished second in the tournament.

Who Impressed: The Czech’s may eventually concede that they tend to overwork C David Kase (PHI 5th/2015), but he looked fresh with his reduced minutes in Dmitrov thanks to solid depth play from 5’9 C Jiri Cenoch (2016) and 5’10 C Tomas Andres (2016), with the latter scoring a pair of goals in the loss to Sweden. All three were excellent on their zone entries and backchecked when the situation necessitated one. And while none have the elite, game-breaking abilities from the center ice position the way 2015 draftees Filip Chlapik, Pavel Zacha and Michael Spacek can provide, the ones on display at the Four Nations should provide the Czechs with the depth scoring they generally lacked at previous WJC’s.

Who Disappointed: Everyone seemed to be interested in how G Karel Vejmelka (NAS 5th/2015) would fare as the pre-tournament No. 1, but he gave up two quick goals in the opening-day 4-1 loss to the Finns and four more two days later despite a two-goal lead in the loss to Sweden. His performance certainly won’t help his case for being the starter for the U20’s in December, a tournament he failed to earn a spot in just last year. Furthermore, he was blitzed for six goals in a WJC scrimmage loss to Canada on August 6th, so it’s going to take another solid showing as a third stringer for Pardubice for him to silence the naysayers and actually earn a spot on the U20 team.