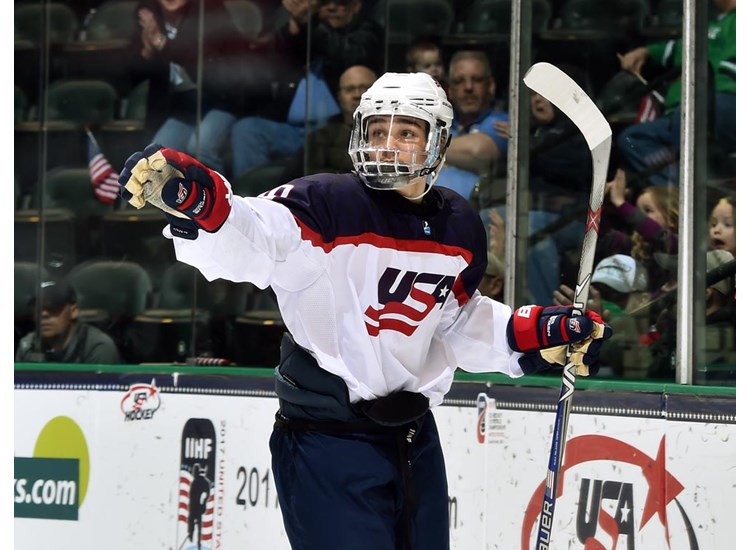 Position: Center
Shoots: Left
Height/Weight: 5’10 170 lbs
Born: July 29th, 1998, Swansea, IL
Obtained: Joined Team USA’s U18 team on March 8th, 2015 from the U17 club…Committed to Boston University for 2016-17.
Notes: 2015-16: Led Team USA in scoring with 107 points in 62 games…Was top American scorer at 2016 IIHF under-18 world championship with 14 points in seven games…Was named to Team USA’s preliminary roster for the 2016 World Junior Championship but was later cut…Led U18 Five nations Tournament in scoring with five goals and seven assists in four games, leading the Americans to a 4-0 mark…His 20 points in his first 10 games of the season is second only to Jack Eichel’s 24 in 10, set in 2013…Was named to Team Plante for the 2015 CCM All-American Prospects Game, where he had two shots on goal and went 8-for-13 on faceoffs…2014-15: Registered four goals and 11 assists in eight games as team USA won the gold medal at the 2015 IIHF U18 World Championship…Finished fourth on U18 team in points-per-game (1.44) with nine goals and 14 assists in 16 games after leading the U17 squad in scoring with 59 points in 45 games…Had two assists in four games as Team USA finished in second place at the U17 Five Nations in Dmytrov, Russia…Named to All-Tournament team after he led 2014 World U17 Hockey Challenge in scoring with 13 points (six goals, seven assists) in six games as the Americans finished second…Registered tournament-best eight points (three goals, five assists) in four games as Team USA finished second at the U17 Four Nations in Ann Arbor, MI…2013-14: Led Shattuck St. Mary’s program in scoring with 36 goals and 41 assists in 51 games.

Clayton Keller’s arrival to the U.S. Under-18 team last March wasn’t surrounded with much fanfare. Not only was he months away from his 17th birthday, but he also had to find a role on a team already loaded at the center ice position. Still, the pivot cut from superstar cloth made the most of his short time there, dominating play at a tune of almost a point and a half per game and winning gold as a key contributor at the U18 Worlds. This season, he’s been the brightest of stars on a loaded team overflowing with draft prospects, leading his squad in scoring by a country mile (he has 19 more points than the second leading scorer). The development of talent-rich forwards like Keller generally follows a common pattern, but we’re starting to see there’s nothing common about him. Some like to compare him to special talents such as Toronto prospect Mitch Marner. Others see a resemblance to Doug Gilmour. He’s going to be in the NHL one day, regardless, and we simply cannot call him a consolation prize in a draft substantially devoid of top-end centers once removed from the early stages of the first round.

Keller is a strong, shifty skater with a powerful shot, displaying brilliance and hockey sense strikingly similar to what Marner brings to the ice. And while Marner is a winger, Keller is equally adept at bringing you out of your seat while leaving amazed opponents on the very edge of theirs. He’s schooled amateurs of all ages — U.S. college seniors, European stars, NHL-bound Canadian juniors; it doesn’t matter. He’s a hard-nosed, fearless player with a lot of flash, but he’s been Team USA’s leader and go-to option for every critical situation – defensive zone draws, killing penalties, gaining entry into the offensive zone, etc. Does he have franchise potential? We’ll let you judge for yourself, but keep in mind he’s nearly produced as much as Jack Eichel and Auston Matthews did with the NTDP. Keller is also nearly a year younger than Matthews, who set the NTDP scoring record a year ago with 117 points. If Keller keep his current pace for the rest of the season and through the 2016 U18 tournament, he’ll come close to matching him.