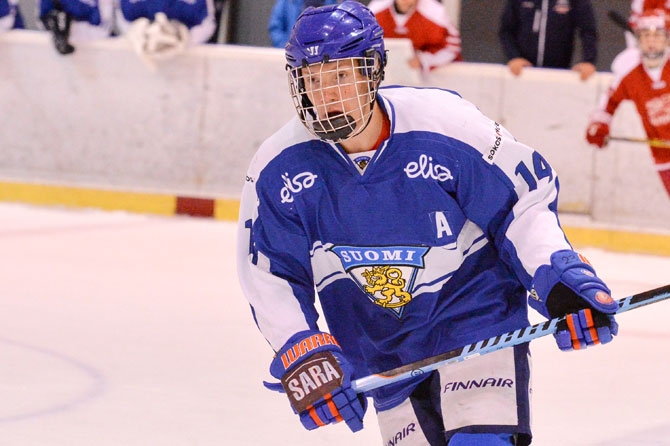 Zuchwil, Switzerland (The Draft Analyst) — Finland’s booming hockey machine, fresh off a dramatic championship at the Under-20 World Juniors, is having a pretty good winter. While the hockey world’s collective gaze fixated on the round-the-clock display of talent at the WJC’s in Helsinki, a prospect tournament in Switzerland with far less publicity confirmed just how good a job Finland does in developing young talent.

The Finns went a perfect 4-0 in the Under-18 Five Nations Tournament, hosted by the Swiss Ice Hockey Federation in Zuchwil from 26-30 December. Finland, along with entries from Slovakia, Germany, the Czech Republic and the host Swiss, fielded a team minus some of its best U18 talent, who busily went and got WJC gold in front of the home crowd. Yet the quality of its prospect depth on display at the Five Nations represented an equally integral step in validating its national development program, as the Finns outscored the overmatched competition 22-6, with six goals in three of their four games.

Center Otto Makinen, one of Finland’s top prospects not playing in either North America or in Finland’s elite league, led the charge with a tournament-best seven points (two goals, five assists) in four games. The 2016 draft-eligible pivot, who also led Finland in scoring at the November U18 Five Nations, anchored a top line with star winger Janne Kuokkanen (who can also play center) and 2017 prospect Emil Oksanen. The trio’s size and skill made them difficult to contain, and the results were expected. But it was emerging 6’5 power forward Joona Koppanen, a 2016 draftee, who scored two critical goals, including the game winner, in a 4-1 win over the Czechs in the tournament opener.

Koppanen is a skilled power forward with soft hands and likes to mix it up in the trenches. He doesn’t loiter on the periphery, nor does he get cheated if a shift isn’t going his way. Koppanen finished the competition with a team-high four goals in four games. Another 2016 eligible worth mentioning is also a big-bodied goal scorer — right wing Eetu Tuulola. He’s not as feisty as the aforementioned Koppanen, but he’s got a quick release and knows how to sneak into position with a wide passing lane.

Finland didn’t bring a single draft-eligible defenseman, which speaks volumes of a program without a position in need of development. Robin Salo, who was a late cut for the WJC team, scored two goals in four games, but it was fellow 2017 eligible blueliners Henri Jokiharju (1g, 4a) and Urho Vaakanainen (1g, 3a) who led in scoring from the back end. The trio combined for 37 shots over four games.

The goaltending combination of Leevi Laakso (2016) and Niilo Halonen (2016) split the four games and shared an identical 1.50 goals-against average.

The Czech Republic’s time in Zuchwil had an inauspiscious start, as starting goaltender Adam Brizgala — who performed well for the U18’s in the Ivan Hlinka tournament last August — was felled by inury. The roster brought to Switzerland by head coach Robert Reichel was far younger, with the majority being 1999-born players since the Czechs recently sent most of their top 2016 draft eligibles to Canada for the World Junior “A” Challange. One player, however, who played at both the WJAC and at Zuchwil was gutsy left winger Jiri Karafiat, who has risen steadily up the Czech U18 program’s depth chart as they reach the midway point of a gauntlet of international competition.

Karafiat may have been relegated to a support role at the Ivan Hlinka last summer, but he was a weapon at the WJAC (team-high three goals in four games) and in Zuchwil, where he tied for the team lead in goals (3) and points (5) while ensconced on the top line. He can play center or wing, but in Switzerland he was on the wing of playmaking center (and fellow 2016 draft eligible) Tomas Havranek. They played together sparingly at the WJAC, but Havranek’s speed and vision coupled with Karafiat’s quick hands and nose for the net created an obvious option for Reichel, who had to look elsewhere for scoring with son Kristian not at the tournament. Karafiat already stands at 6’1, weighing 170 pounds and uses size and smarts to protect the puck in and around traffic. His skating is above average and improving.

A duo of 2017 draft eligibles — right winger Pavel Kousal and defensemen Jakob Sirota — also put together strong showings in Zuchwil. Kousal, who is shredding the Czech U20 circuit with 28 points in 24 games, tied Karafiat for second in team scoring with five points while playing his off wing on the right side. He’s listed at 5’11 and has a late 1998 birthday, so there’s a good chance he’ll reach 6’0 or even a tad higher. Sirota is a big, mobile two-way blueliner who’s still green when it comes to properly defending a puck rusher

Germany finished about where it should have – in third place after winning two and losing two. The Germans weren’t necessarily favored by the odds to win the competition, but they showed up with a roster relatively devoid of inexperience. Twenty four of the 34 invited to camp were draft eligible for 2016, with only six of the final 24 born after September 15th, 1999. The offense was spearheaded by dynamic right wing Tobias Eder (surprise, surprise), who is pegged as Germany’s only native son with a shot at getting picked in the 2016 draft. And why not? He’s got a tremendous knack for getting his shots off from anywhere on the ice, and does so with authority. Eder, who played for Germany at the WJC’s Division 1A immediately before arriving in Switzerland, is an excellent shoot-and-pass kind of winger, but has things going for him upstairs as well. In Zuchwil, Eder tied teammate Timo Walther with a team-best two goals in four games, and led the Germans with 15 shots. But we don’t think Germany’s draft pick-quality talent pool stops at Eder. Goalie Mirko Pantkowski (6’0/159) held his own, stopping 92 of 101 shots for the third-best save percentage in the tournament (.910). We remember him as the poor lad who was obliterated by Team USA at last Spring’s U18 Worlds, where he gave up nine goals in two periods. He doesn’t have the desired size for the NHL, but he’s improved, and that’s all we could ask for in a developing goalie.

The host nation had yet another underwhelming performance in international competition, as Switzerland finished with only one win in four games. The Swiss targeted a winning record in international play for the final U18 event of the calendar year despite losing top player Nico Hischier to the U20 World Juniors. They started relatively well in Zuchwil, losing a shootout to Germany in the opener, then downing the Slovaks the following day. A 6-2 loss to Finland was expected, but it was a painful 5-3 loss to the Czechs in the finale that typified the kind of year the Swiss endured. After trailing 3-0 to start the game, speedy left winger Daniel Volejnicek began the comeback with a power play goal, and later tied it 3-3 with his second of the game. The Swiss eventually dropped a 5-3 decision, continuing the trend of disappointment. There were bright spots, however, as feisty, two-way left wing Yannick Lerch played his in-your-face style, and even scored a goal in two games.

The Slovaks boast an impressive Under-18 program, but they’re still one year away from making a dent in international competition. The effort in Switzerland, however, was beyond impressive when you consider they beat the rival Czech Republic in the opener, then lost two different games by a goal with the tournament’s greenest roster. Only six of Slovakia’s 24 players are eligible for the 2016 draft, while the rest of the underagers carried them through, especially defenseman Martin Bodak, who plays in Finland. Not eligible for the draft until 2017, Bodak owns a cannon of a shot, and he used it to beat the Czechs in overtime. He finished as the tournament’s top scorer among defensemen with two goals and four assists. Teammate Samuel Bucek, a center/wing with sick hands and a lethal wrist shot, finished in a four-way tie for second in tournament scoring with three goals and three assists. He had an impressive Hlinka back in August, and is headed to North America next season to play with the USHL’s Chicago Wolves. The third of Slovakia’s top players from Zuchwil is power forward Adam Ruzicka (no relation to Rosy Ruzicka, by the way). Ruzicka also finished with six points, and it’s a safe bet that he, Bodak, Bucek and talented winger Milos Roman (three assists in four games) will all be in North Dakota this Spring for the U18’s.