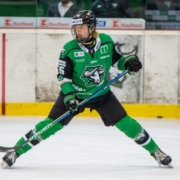 Slick two-way defenseman Brandt Clarke is one of the top prospects for the 2021 NHL Draft. After starring as a rookie for the OHL’s Barrie Colts in 2019-20, Clarke spent the second half of this season with Nove Zamky in Slovakia, where he was their most productive defenseman.