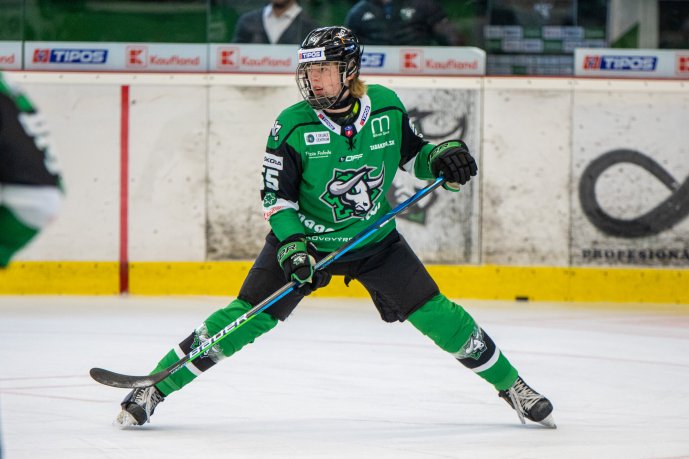 It’s rare to find a hasty decision that delivers positive strategic results, but Clarke’s move from the Barrie Colts and OHL stagnation to the unfamiliarity of Slovakia’s adult-age Tipos Extraliga turned out to be a wise one, at least in terms of maintaining draft-year notoriety. Within days of arriving in Europe in late December, Clarke suited up for HC Nové Zámky and logged nearly 23 minutes of ice without any noticeable signs of rust or ineffectiveness. It took him awhile to impact the scoresheet from an individual standpoint, as Clarke didn’t register a point in 17 of his first 21 games. Nonetheless, he still played 19:40 a game while being used on their middle pairing (usually partnered with lefty Peter Mikus) and quarterbacking the top power-play unit. Clarke caught fire in his final five games (2 goals, 6 assists) to end up leading all Nové Zámky defenders with a 0.58 points-per-game average, and he also fired an impressive 3.04 shots per game.

Last season (2019-20) was equally as impressive for Clarke, albeit under standard conditions with the OHL. Barrie’s late-season surge was driven by upgrades in the forward ranks, but the midseason trade of veteran Tyler Tucker allowed Clarke to showcase his abilities with an increased role. In the 31 games with Tucker as Barrie’s No. 1, Clarke managed only 14 points (0 goals, 14 assists). From Jan. 8 onward, however, Clarke’s production jumped to six goals and 18 assists in 26 games, all the while the Colts made a charge for the Central Division crown. For his efforts, Clarke was named to the 2019-20 OHL All-Rookie Team.

Clarke has no problems with mobility whatsoever but he was one of the most awkward upright stances you’ll find. He can glide all over the ice and use quick feet to track the puck in any direction, yet his wide, bow-legged base can make him look clumsy. Aesthetics aside, Clarke is an end-to-end rusher and accelerates past zone pressure with ease, therefore rendering any debate over whether or not his base or short stride is a detriment to his overall quickness as irrelevant. Clarke’s strength on his skates is average but he has shown improvement against thicker forwards, although his reverses in the face of heavy pressure are both rapid and timely. Even older, stronger opponents in Slovakia were unsuccessful when they tried to lean him off the puck.

Controlling the puck is a major strength of Clarke’s game no matter how fast he’s moving. He can be both a shooter and a playmaker, and he can breakout of his own end in a variety of ways without forcing the puck into an untenable situation. Clarke is as poised a teenage defender as you’ll find, and handling the puck under constant pressure reveals a young made who can play keep-away while moving in any direction before slicing a zone scheme in half with a dart of a stretch pass. Clarke’s soft hands and elite hand-eye coordination combine with his wheels to help him enter the zone cleanly, and the decision to delay at the opposing line can jumpstart a lengthy possession with Clarke leading the charge. He’s more than capable of protecting the puck in tight spaces and he uses his body effectively to keep harassing opponents lunging at nothing but air.

Clarke has one of the best shots among draft-eligible defensemen and he has no reservations about when or how to use it. Whether he’s deep at the point or dropping down for a mid-range attempt, Clarke generates impressive velocity with either the slapper or the wrister. His reputation as a no-nonsense shooter appeared to have carried over from the OHL to Slovakia, where veteran goalies found difficulty controlling rebounds from both sharp-angle attempts and deep bombs with a clear line of sight.

Owning an elite shot helps Clarke exploit a checker’s indecision with look-offs and slap fakes. A clogged lane or seam doesn’t intimidate Clarke, who will dance around in all directions until an opposing stick blade is swung the wrong way. Having soft hands and confidence in his stickhandling makes it easier for Clarke to outwait an opponent while simultaneously identifying multiple teammates to pass to from either forehand or backhand. Puck management, pass accuracy, and Clarke’s touch and timing are all at a superior level.

Clarke is a major risk taker who is running neck and neck with Luke Hughes and Simon Edvinsson for the title of Chief Riverboat Gambler among draft-eligible defensemen. Much like his aforementioned peers, however, Clarke is an incredibly strong 1-on-1 defender who uses a mix of razor-sharp awareness, quick feet, and an intense competitiveness  to eliminate plays away from high-danger areas.

He may not look like an intimidating presence, but Clarke delivers hard hits in open ice and will finish his checks along the boards with authority, even from a static position. It became evident early into his Extraliga season that bigger, tougher opponents could not intimidate him physically, and Clarke himself was able to use his own physicality to send a message. He plays with a ton of enthusiasm and it shows with his effort level from start to finish.

Smarts and sound decision making are both qualities that Clarke can reveal throughout the entirety of his shifts. He’s a confident, decisive puck carrier who constantly scans the ice to his front and rear regardless of whether or not he has the puck. Most of the gambles he makes come in the form or reads or step-ups from within his zone, with the intent to swiftly wrestle away possession and counterattack immediately driving those decisions. Clarke definitely understands the game and seems to understand his opponent’s way of thinking, and it is common to see him either deliver instruction to teammates before a draw or using hand and arm signals while vocally identifying weak-side threats. These are all traits of a studious individual who even as a depth player would still think the game outside the boundaries of his reduced role.