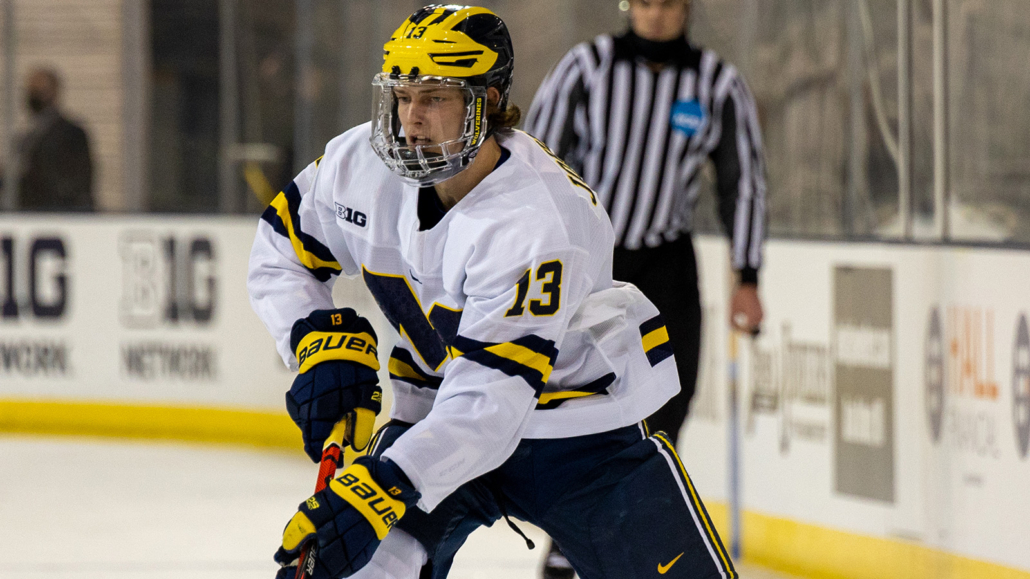 Piling up points comes naturally for this super-skilled Michigan forward, who finished second in the nation in freshman scoring the season after he won the BCHL scoring crown by an impressive 30 points. It didn’t take long for Johnson to confirm his reputation as a scoring machine, as he posted a four-assist effort in his very first NCAA game on Nov. 14 against Arizona State, and did so while on Michigan’s fourth line. It soon became apparent that Johnson and his center Matthew Beniers were deserving of expanded roles (to include permanent power-play time), and their eventual promotion not only rewarded them for their efforts, but also set the example for the Wolverines’ other top freshman to follow. Johnson is listed as a center but he played left wing his entire 2020-21 season.

Although it’s tough to try and marginalize the gaudy stats of a freshman, it bears mentioning that the bulk of Johnson’s points were a combination of secondary assists and insurance or garbage-time goals. Of Johnson’s 18 assists, 15 were secondary, and only a handful were delivered with the game either tied or with a one-goal difference. Still, his total production is way beyond acceptable even without the added context of competing for ice time within the NCAA’s deepest and most talented freshman class.

Johnson is an elusive east-west skater with above-average speed and exceptional close-quarter footwork and puck control. He’s a master stickhandler who can initiate, execute, and finish plays off the cycle or rush, and it was quite common to see Johnson spearheading lengthy offensive-zone possessions which lasted well over 90 seconds. He was in open ice quite a bit, and his quickness is driven more by a high motor and quick anticipation than blinding end-to-end speed. His stride is clean and he can outpace back pressure on his own, but Johnson is a highly-calculated puck carrier who knows when to accelerate and when to delay.

Johnson ability to dominate the puck in the offensive zone for the entirety of shifts reveals all you need to know about his skating and stickhandling, and against physical college-age opponents no less. Maintaining possession and generating shots requires constant movement, and Johnson can put on a clinic for either one. His balance and timely peel-backs or reverses along the wall eventually tire out pressure, but Johnson also uses spin moves or jukes while taking direct or indirect routes into the scoring areas. Johnson is one of those rare players who can look both quick and energetic within the confines of an obstacle-laden offensive zone.

Johnson owns an arsenal of shots to select from and he usually dictates the terms of when and how he’s going to attempt to score. Of his nine goals this season, several came on the backhand and another one from a booming slapper, but he’s also attempted the “Michigan” move from behind the net and is more than comfortable dropping a toe drag or dangle. Johnson isn’t as prolific a shooter as one might expect (2.04 shots a game ranked seventh on the team), but that doesn’t mean he’s indecisive or positioned poorly. Rather, Johnson is the definition of a playmaker — one who usually tries to create opportunities for anyone in his five-man unit before himself. Owning a heavy, accurate shot in addition to being a pinpoint (and unpredictable) passer is what makes Johnson so difficult to defend, and even keeping him to the outside fails to eliminate the danger of his nasty backhander.

Playing sound defensive hockey off the puck is something you rarely see linked to high-scoring wingers, but Johnson is the farthest thing from a one-way forward. He is both attentive and active in the neutral zone and will apply noticeable pressure on the forecheck while using multiple starts and stops, and keeping his head on a swivel. Being this engaged off the puck has benefited Johnson and his linemates, as either he or Beniers have single-handedly neutralized breakout attempts with a quick stick or timely read.

Johnson rarely gives room to opposing puck carriers and will harass them well into his own zone. Although he isn’t a punishing checker and rarely separates an opponent from the puck by using his body, Johnson has a high battle level and will make his presence felt from the beginning of a shift to the end. He didn’t kill penalties but most of the time was able to match and support the consistent 200-foot effort of his center Beniers during 5-on-on.

Being a tricky and creative scorer requires more than just soft hands, and Johnson has the tendency to outthink opponents several plays ahead. There are times when Johnson can seem like a puck hog, but he plays with his head up and gives signals during play or instruction before draws to everyone within his unit to maximize their time in the offensive zone. Again, he is a playmaker, and owning that moniker requires more selflessness than stubbornness. It can’t be confirmed if Johnson is a hardcore student of the game, but he certainly acts and plays like it.