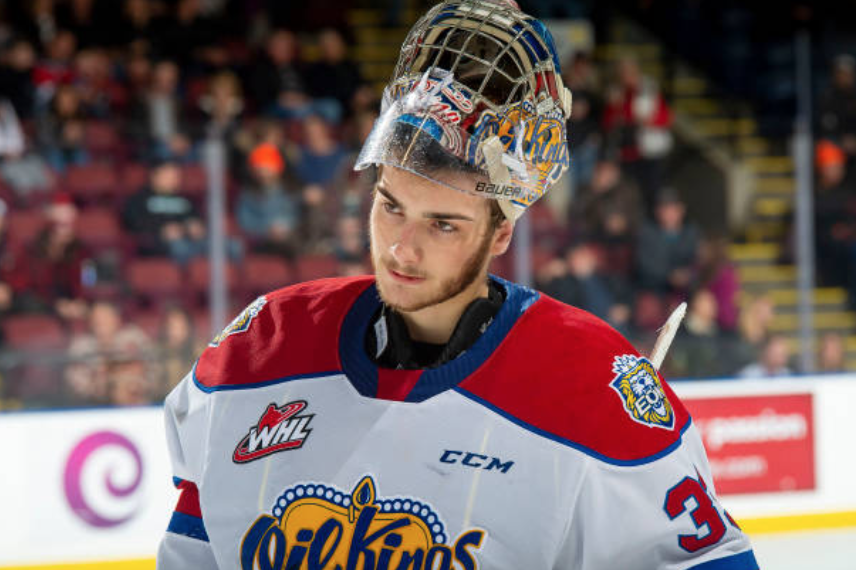 Cossa is the No. 1 goalie for a loaded Edmonton Oil Kings’ squad that is expected to contend for the WHL crown. He split duties with Beck Warm and Todd Scott a season ago, but it was Cossa who led last year’s team in wins (21), save percentage (.921), and shutouts (4). This season is starting out as Cossa’s best, as he won each of his first six starts through March 23 and owns a stingy 1.17 goals-against average and .956 save percentage. Although Edmonton ices as formidable a lineup as you’ll find in major junior, Cossa proved to be invaluable himself by going 11-2-2 with a .939 save percentage in games where he faced 30 or more shots. He was selected 36th overall by the Oil Kings in the 2017 WHL Bantam Draft.

To call Cossa simply a “butterfly” goalie is redundant — every goalie at every level uses some form of the butterfly, therefore the tactic should be implied. Like most bigger netminders, Cossa limits his positioning to inside the crease and will not extend outside of it to challenge shooters. If one would compare him to recent top-rated goalie prospects, Cossa is neither as jittery as Yaroslav Askarov nor is he as robotic as Spencer Knight. Rather, Cossa combines fluid crease shuffles with compact movements and limits the amount of time he spends on his back or his pads. He’s not much of a risk taker and if Cossa gets beat, it’s rarely from his own egregious mistake or over-committal to one side. Cossa also doesn’t venture too far from the crease when facing a breakaway.

Cossa exclusively uses the RVH for post integration once the puck is moved closer to the goal line, although he seems to switch rapidly between remaining upright when his team controls the puck to dropping down when it’s lost. He grasps the importance of a tight post seal, and being 6-foot-7 allows him the option of using his shoulder rather than his mask to cover the top corner. When Cossa drops into his RVH, it’s usually not for long, and he follows the doctrinal guidelines by limiting his RVH usage to moments when the puck is below the bottom of the circle and above the goal line. It appears as he favors the toe-to-the-post method when in the RVH, and Cossa looks quite comfortable when his body is flush. Only when pucks are behind the net will Cossa use an upright double skate-to-the-post technique. It goes without saying that the closer a goalie gets to the post, the bigger the gaps on the short side. But Cossa is so quick and smart that you rarely see him get beat on the long side period, let alone from a sharp angle.

Cossa knows how to play his angles to limit the amount of times opponents gun for the upper half, but five of the first seven goals he surrendered this year were over his glove (three) or blocker (two). The same rang true a season ago, where his worst outings were riddled with medium-danger shots beating him high to the glove or blocker side. Fast forward to this season, and you get the sense that Cossa has made angle adjustments that require opponents to attempt the perfect snipe while a screen is established to beat him up top. Of course, neither his glove nor blocker should be considered a soft spot or weakness, as Cossa simply plays deep in the crease and covers the lower half so well that the upper half is all that’s available to shooters. Cossa doesn’t use textbook glove-hand positioning, as his palms aren’t always flush with the angle of the puck and he’s even revealed a palm-down/yo-yo position. But when you consider his depth and the significantly low goals against, it’s obvious Cossa knows how to play his angles and that WHL shooters are incapable of exploiting the upper half with regularity.

You’ll be hard pressed to find a teenage goalie who works harder than Cossa at tracking the puck’s every move, to include when controlled behind the net. Two things that you will rarely see is Cossa losing sight of the puck or losing the location of the net behind him. It seems clear that Cossa spends a lot of time working on puck tracking by the way he is able to look/visualize attempts into his glove, blocker, and even toe saves. Most bigger goalies tend to rely on their size to compensate for slowed reactions to the bang-bang or cross-seam attempts, but Cossa’s head movements are usually in concert with those of his arms or pads.

Cossa is incredibly quick for his size and uses rapid T-pushes to adjust from the initial save to potential follow-on chances. He leans into most shots and keeps his body and equipment squared to the puck to minimize the distance of his rebounds. The Oil Kings have several crease clearers on their blue to help limit the amount of second-chance opportunities Cossa will face on a given night, so you rarely see him get beat by a rebound chance in the slot. One of his better attributes is the way he tracks, reacts, and smothers wraparound attempts.

Cossa is impressively quick for a goalie of any size, let alone one who stands around 6-foot-7. His post-to-post movements are both explosive and clean, and it isn’t often that Cossa pushes himself well out of position. He relies heavily on his squareness and cutting angles off, and doing so requires rapidity in both movement and anticipation. Cossa’s shuffles in any direction are limited to two or three taps and he can dart into a perfect post seal. There’s no sign whatsoever of clumsiness, lack of coordination, or unecessary steps that slows down the time it takes to get set or re-set.

Cossa is an aggressive puckhandler, much like the aforementioned Knight and Askarov. He seems more than willing to jump behind the net and interdict a dump-in, but opposing forecheckers have to be aware of Cossa’s strong wrists and the confidence he has in moving the puck. There are times when he gets himself into trouble by misjudging the speed of either the dump-in or the forechecking pressure, but that is an easy fix that comes with experience.

No. 1 goaltender with franchise-carrying potential.