NASHVILLE (The Draft Analyst) — Every summer a Stanley Cup champion is crowned, and every summer we have to hear cliche after cliche about how the winning team “felt something special in training camp”, or that “nobody believed in this group except us.” And as much as the players may genuinely believe those words to be true, the ability to identify those teams “special” enough to contend for hockey’s coveted trophy is far more constrained during the first week of the regular season than any point thereafter. Still, that doesn’t mean we should give up on guessing altogether.

A good place to start would be the early-season standings, where one can identify the teams that shot out of the gate and began separating themselves from the eventual bottom feeders, pretenders, and wannabes. One way to do that is to keep track of regular-season point totals for the 2020-21 NHL season, with only a handful of teams expected to maintain consistency after a good start.

Below is our weekly update on the top five teams who we think will be the favorites to finish atop the NHL standings and be the leading contenders for the 2021 Stanley Cup. 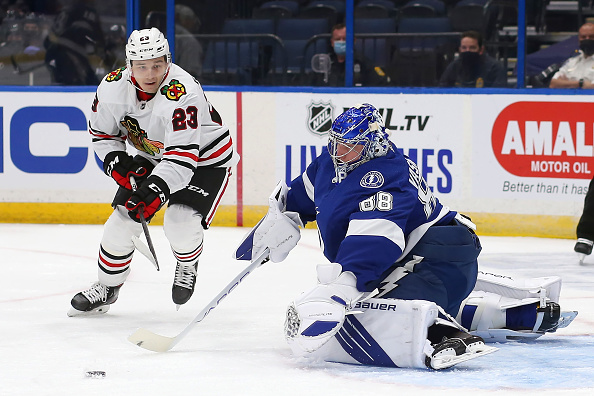 No Nikita Kucherov? No problem for the defending Stanley Cup champions, who never trailed the rebuilding Blackhawks in either of their two matchups, outscoring them 10-3. They used a balanced attack to down Chicago, as eight different Bolts scored a goal and 13 registered at least one point. Perennial Vezina candidate Andrei Vasilevskiy had it fairly easy in goal during a 22-save effort in the 5-1 win on opening night on Jan. 13 but was busier the next game, posting 35 saves in a 5-2 triumph. Steven Stamkos notched multi-point games in each victory and leads the Lightning with 2 goals and 3 assists.

The Lightning hit the road for four games, beginning with a two-game set in Columbus against the Blue Jackets (1-2-0) on Jan. 21 and Jan. 23. Although they were never division rivals until the current realignment, Columbus and Tampa have knocked each other out of the playoffs the last two seasons, with the Bolts outlasting the Jackets in Round 1 last summer after Columbus upset them in 2018-19. The Blue Jackets are dealing with internal drama relating to top center Pierre-Luc Dubois’ contract and alleged desire to be traded, but they were able to eke out their first win of the season on Monday against the hapless Red Wings. Tampa is 12-4-0 in their last 16 regular-season games against Columbus and have held the Jackets to one goal or less in six of the previous eight meetings 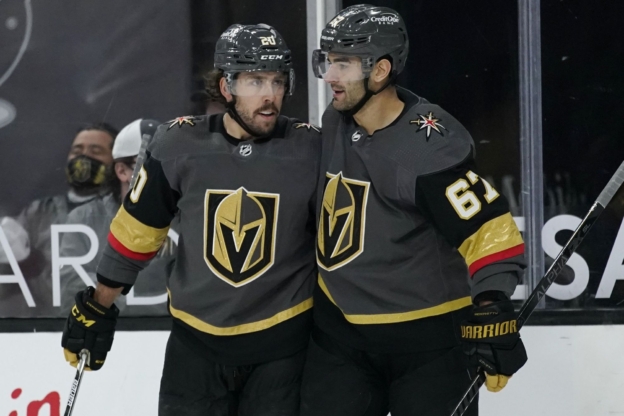 A favorable schedule heavy on home dates against weaker opponents is one way a contender can springboard into a higher position in the standings, which is exactly where the Golden Knights sit after a sweep of Anaheim and Monday’s come-from behind win over Arizona. Unlike Tampa, however, Vegas found itself in tough, grind-it-out battles to come away with victories in each of their first three meetings. The Knights were tied with the Ducks after two periods last Thursday’s before rallying for three goals in the final frame, and needed a late third-period goal from William Karlsson to get it to overtime before Max Pacioretty won it. On Monday, the Knights trailed the Coyotes 2-0 late in the second period when Pacioretty scored the first of Vegas’ four unanswered goals. The wins haven’t been pretty, but Vegas remains the West’s lone undefeated team and own an early four-point advantage over contending Colorado. Goalies Robin Lehner (2-0-0) and Marc-Andre Fluery (1-0-0) have kept opponents off the scoreboard in the third period.

You have to think the Golden Knights would like to keep this train rolling as they attempt to separate themselves from the West Division’s bottom feeders in preperation for the big four-game block against Colorado that begins on Feb. 14. They host the Coyotes again on Wednesday before traveling to Arizona for a pair on Jan. 22 and Jan. 24, then welcome the contending Blues for two games before playing two games apiece against the three California squads. Arizona should not be overlooked, however, as Vegas has only five regulation wins against them in 14 all-time meetings. 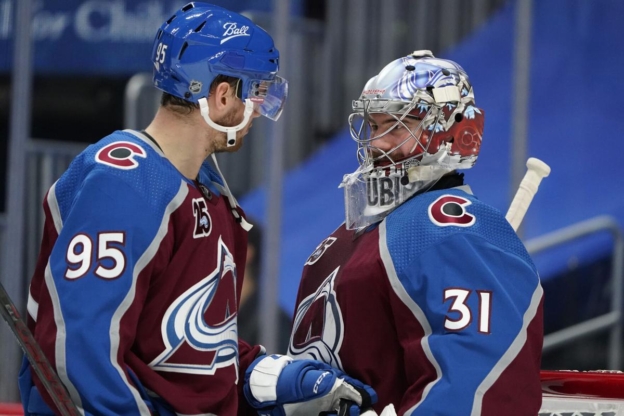 Splitting a two-game set with fellow contending St. Louis while losing forward Andre Burakovsky to an upper-body injury isn’t the best way to start a season, but the Avalanche can take comfort in the fact that they obliterated their division rivals 8-0 on Friday night after dropping a 4-1 decision on Jan. 13. The vaunted top line of center Nathan MacKinnon and wingers Gabriel Landeskog and Mikko Rantanen combined for 4 goals and 7 points in the blowout, with defenseman Cale Makar chipping in 3 assists. Special teams were critical to the Avs’ success against the Blues as they went 6-for-11 on the power play and killed off all six St. Louis power plays.

Now that Colorado’s excitable lineup has gotten a taste of rivalry hockey, they can turn their attention towards the California lottery teams who will take up the next six games of the Av’s schedule. They head west to visit the Kings on Tuesday and Thursday, then take the short trip to Orange County for matchups with the Ducks on Jan. 22 and Jan. 24. They close out the Golden State portion of their early schedule with two home games against the Sharks before traveling to Minnesota for two games against the Wild. Colorado went 2-3-1 last season against the Southern California teams. 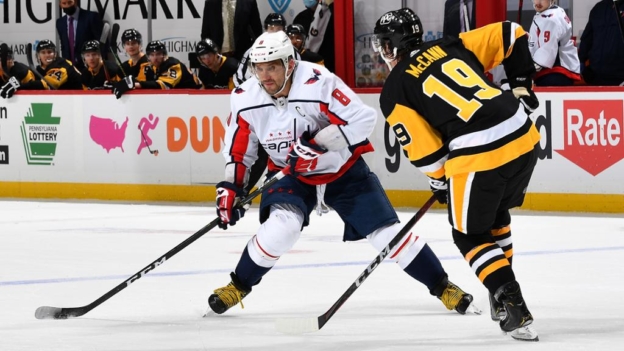 The league’s oldest team certainly did look their age last week in sweeping the two games in Buffalo and taking arch-rival Pittsburgh to a shootout. Leading the way were the usual suspects, as veterans Alexander Ovechkin (1 goal, 3 assists) and Nicklas Backstrom (2 goals, 2 assists) each combined for 4 points in 3 games. It was until 19 seconds into the Pittsburgh game on Sunday that the Capitals found themselves trailing and that only lasted for half a period. Shootout loss to the Pens notwithstanding, Washington has looked solid in its first three games and appears to be on the right track for their sixth consecutive division title. One area of concern moving forward is consistency between the pipes, however, where youngster Ilya Samsonov was touched for seven goals on a combined 53 shots. The loss of free agent Henrik Lundqvist for the season opened the door for minor leaguer Vitek Vanecek to serve as the backup, and the 2014 second-round pick delivered with a 30-save performance in the 2-1 win over the Sabres last Friday night.

The Caps wrap up their two-game series in Pittsburgh on Tuesday before heading home to host the Sabres for a pair on Jan. 22 and Jan. 24. The schedule stiffens thereafter with two games apiece at the Verizon Center with Boston and then the New York Islanders, who bounced Washington in the first round of last season’s playoffs. 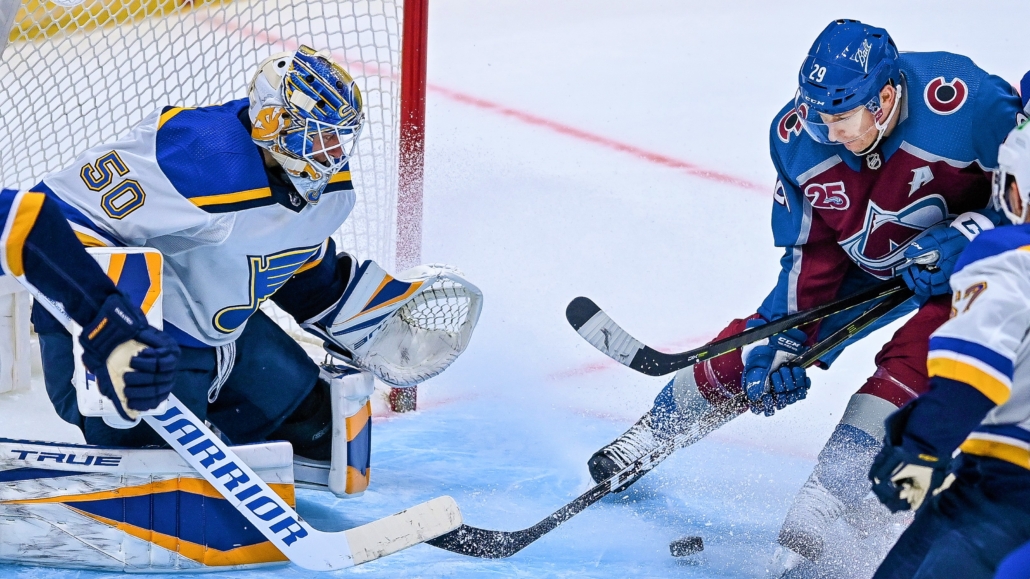 After a solid outing in the season-opening win over Colorado, Jordan Binnington’s issues in goal appeared top have carried over from last postseason, as he was torched by the Av’s for four second-period goals before being yanked in what became an 8-0 laugher last Friday. His bounce-back effort in a 5-4 home win over the Sharks three days later wasn’t much better, but Binnington was able to escape with the win thanks to a tie-breaking goal by Jordan Kyrou. Of course, you can’t pin everything on Bennington, as the Blues are trying to used to the loss of captain Alex Pietrangelo, who bolted for Vegas last offseason as a free agent. Still, this is formidable lineup that will eventually hit their stride, and playing the hated Avalanche in their first two games may have been a blessing despite critical division points being up for grabs.

The schedule remains light for the Blues this week as they finish up with the Sharks on Wednesday before hosting the Los Angeles Kings for two games on Jan. 23-24. The ideal scenario would be for St. Louis to walk away with a win in all three in preperation for their trip to Vegas to play the division-leading Golden Knights on Jan. 26 and Jan. 28. The Blues won’t play the Vegas again until mid-March.