NASHVILLE (The Draft Analyst) — The profound impact wreaked upon the sports world from the ongoing global pandemic cannot be understated. Since shutdown after shutdown began last March, every major sport and its respective development circuits has dealt with the pitfalls surrounding a return to play, thus causing league-wide cancellations, suspensions, and postponements. Although the QMJHL was able to avoid the kind of lengthy shutdown that their CHL brethren leagues in Ontario and Western Canada were forced to implement, play was ultimately ceased in the province of Quebec after a brief autumn schedule while the Maritime teams continued on. Therefore, an imbalance in games played has resulted, forcing the league to create a Quebec “bubble” to allow those teams to catch up on missed action.

Nonetheless, the NHL announced in December that the 2021 draft was going to take place in late July, meaning prospects born in late-2002 or most of 2003 remained on the radar of all 32 NHL clubs regardless of whether they were actively playing games or not. From a 2021 NHL draft standpoint, we already covered in October a handful of youngsters to keep tabs on. Below you’ll find a continuation of our analysis of the QMJHL’s most notable draft prospects. 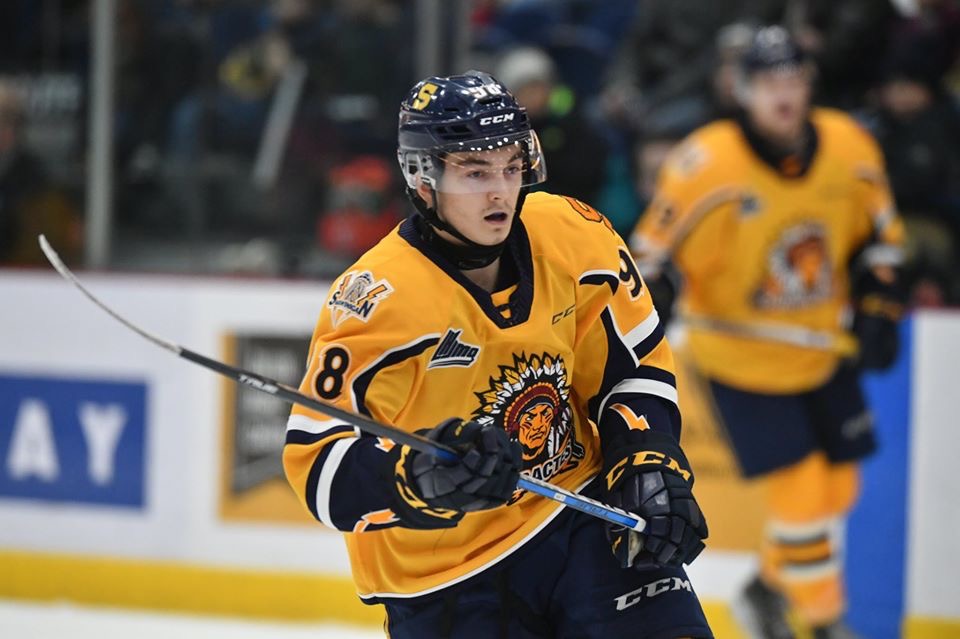 The third-year winger from L’Islet, Quebec City was selected in the second round, 33rd overall by Shawinigan in the 2018 QMJHL draft. Bourgault enters his third year, continuing the upward trajectory in his development. He is physical in that he controls the play along the boards without getting knocked around, often initiating contact to give himself separation. His board work does not end there. Xavier uses his smarts and gifted hands to beat a forecheck with small area passes to his center that traps a pinching defenseman for an odd man rush. He has done this on numerous occasions. Although Bourgault possesses a plethora of tools, it is his mind that separates him from his peers.

Bourgault processes the game quickly, anticipates the play allowing him to be first to a loose puck or on an opponent like white on rice. He combines this aptitude with a quick first step and burst to wreak havoc in all three zones. Xavier is a tireless worker who never quits on a play. He is often seen backchecking on an opponent, lifting sticks or getting his stick in a passing lane to thwart any scoring chances. On the offensive side of the puck, Bourgault is even better. He uses his legs, vision, and smarts to create passing and shooting lanes. His lethal, accurate shot and precision passing make Bourgault a dual threat while opening space for his line mates. He is also tremendous at puck retrieval allowing Shawinigan to keep pressure on their opponents.

Bourgault is used in all situations and recently added center to his portfolio. He manned the pivot due to 2020 first round pick, Maverick Bourque being summoned for Team Canada’s World Junior Team camp. As a center, Bourgault did not look out of place. He was not as dynamic but still possessed the puck and drove the line. More responsibility was thrown on his shoulders and he responded with a solid all-around game while paying more attention to the defensive aspect. Bourgault is an excellent player and prospect for the upcoming draft, who continues to excel in all facets of the game. He is one of the best, if not the best player in the QMJHL. 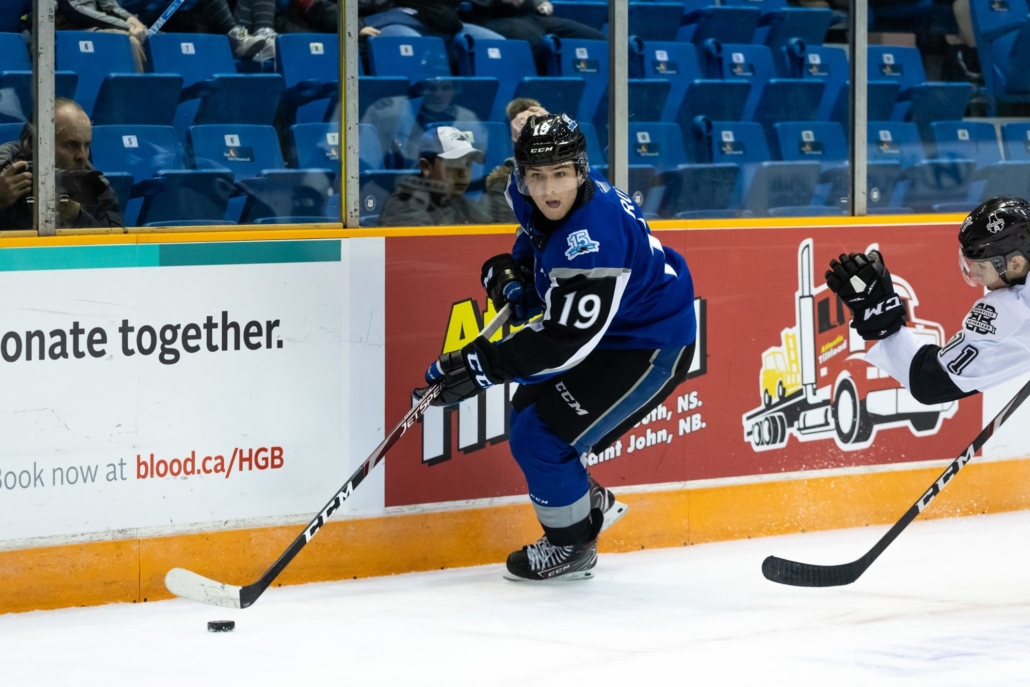 Roy has the burden of trying to live up to the expectations of a first overall pick, and a recent trade request from Saint John may have something to do with that. The 6-foot, 190-pound center from Saint-Georges-de-Beauce, QC was selected by the Sea Dogs in the 2019 QMJHL draft and last season put up 44 points in 60 games as a 16-year-old. He entered his second year with a position change to wing and larger expectations. Although he is averaging over a point per game, Roy is somewhat difficult to assess for several reasons. At first glance, he has average speed and a short stride but also decent size, impressive skill, and a high hockey IQ to be one of the QMJHL’s leading prospects for the 2021 NHL draft.

Conversely, Roy’s play can border on inconsistent. At times he dominates a shift using his smarts, skill, and savviness to control the pace and set up teammates with tape-to-tape passes, only to lose on-ice prominence for consecutive shifts thereafter. This would be somewhat acceptable in an adult-age league where physical play and tight checking can wear down a skilled forward. But again, Roy was the top pick among all eligible 2003-born prospects and should be expected to dominate more shifts than he has. The good news that even with inconsistencies, Roy leads Saint John in scoring and has produced at least one point in 13 of his 15 contests.

Known as power-play specialist for his vision and passing accuracy, Roy does not play on Saint John’s first unit with the man advantage but runs the show for the second from the half wall or point. He has a presence about him while running the unit which gives him time and space to make plays. Roy has fantastic vision to find open players and the hands to distribute the puck for great scoring chances. The tools are there; Roy simply needs to find consistency and drive to become a solid NHL player rather than someone who peaked in his teenage years. 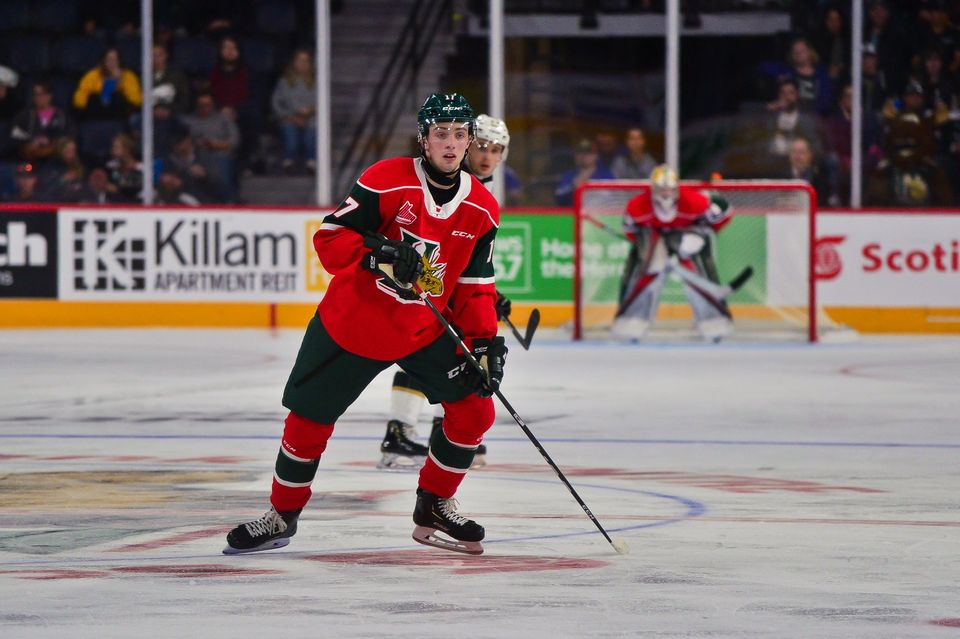 Chosen ninth overall by Halifax in 2019, the left-handed Whynot looks to spearhead the QMJHL’s relatively thin group of eligible rearguards for the 2021 NHL draft. He is been groomed to take over Halifax’s blue line once 2020 NHL first-round pick Justin Barron has graduated, but Whynot remains somewhat raw with potential that seems unlimited.

Blessed with smooth, effortless skating, good hands, keen vision, and smarts under pressure, Whynot can be classified as an offensive defenseman. Earlier in the season, the 6-foot-1, 190-pound Kentville, Nova Scotia native was given the chance to serve as the Mooseheads’ No. 1 with Barron unavailable, albeit with mixed results. It appeared Whynot was trying to do too much in an increased role that increased his exposure to tougher matchups and forced bigger responsibilities on him.On several occasions, Whynot was switched over to the right side while operating with a younger partner. Once Barron returned, however, the duo combined to form the top pairing and issues with puck management or lost coverage were addressed.

Whynot will not wow onlookers with flashy play. He generally keeps the game simple and anticipates the play well. Sometimes his mind is further ahead of his teammates in that he will make a pass to a vacated area unbeknownst to the intended target. Combining solid footwork, skating, and smarts, Whynot is able to defend the neutral zone with solid gap control and he rarely is beaten in one-on-one situations. Whynot is used on the power play and penalty kill. He has a decent shot, shoots for deflections, and usually avoids getting his attempts blocked. He is very good at moving around the offensive zone with and without the puck. Having a young group of forwards leads to more defensive zone time, but Whynot’s composure, smarts, and compete level has enabled Halifax to limit the damage. Although he is prone to the occasional mishap, Whynot is a reliable defenseman who appears to understand his errors and avoids repeating them. His skating, smarts, and positioning have allowed him to steadily improve this season. 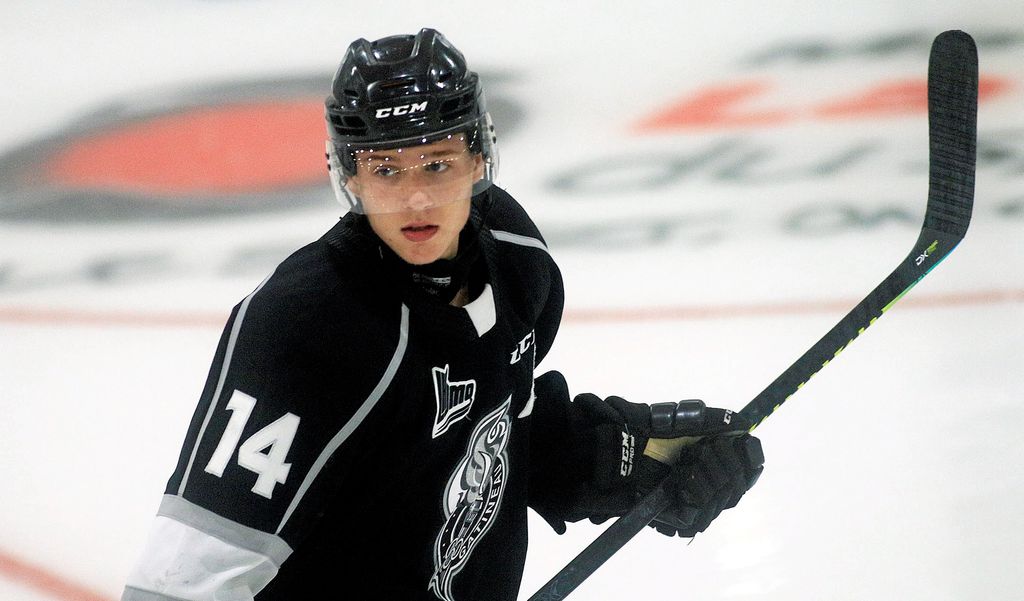 Dean was injured to start the season then missed more time when the league hit a pause. Selected fourth overall in the 2019 QMJHL draft, the Grand Prairie, Alberta native has all the tools to be a top NHL prospect and appeared to be trending towards becoming a first-round pick after a successful draft-1 campaign a season ago. He is smart, competes hard, plays with an edge, and combines those traits with fantastic puck skills and skating. His effortless stride enables him to speed by opponents through the neutral zone while his edgework and agility allow him to maneuver in tight areas to gain space.

Dean centered a line with Manix Landry on his left flank in his first few games, but they were ultimately separated to add more balance to the lineup. The left-handed pivot is reliable in all three zones. He is constantly around the puck, hounding opponents on the forecheck, and Dean’s nastiness sets him apart from most draft-eligibles from the QMJHL. He does not shy away from contact and will play on the edge, delivering a suspect hit or chop with the stick. His ability to combine power and finesse is similar to the likes of Jonathan Toews and even Mark Messier the generation prior.

Of course, Dean has a ways to go until he can produce like those aforementioned stars, but he is more than willing to let his opponent know he means business. Dean is solid on the power play where he plays from the half wall or down low. He has fantastic vision, finding open teammates with precision passing. He also is fantastic in tight areas and puck battles along the wall. Dean does a ton of damage below the goal line, winning puck battles and finding open teammates in scoring position. Although his list of available games to scout has been thin, seeing Dean play has been well worth the wait. 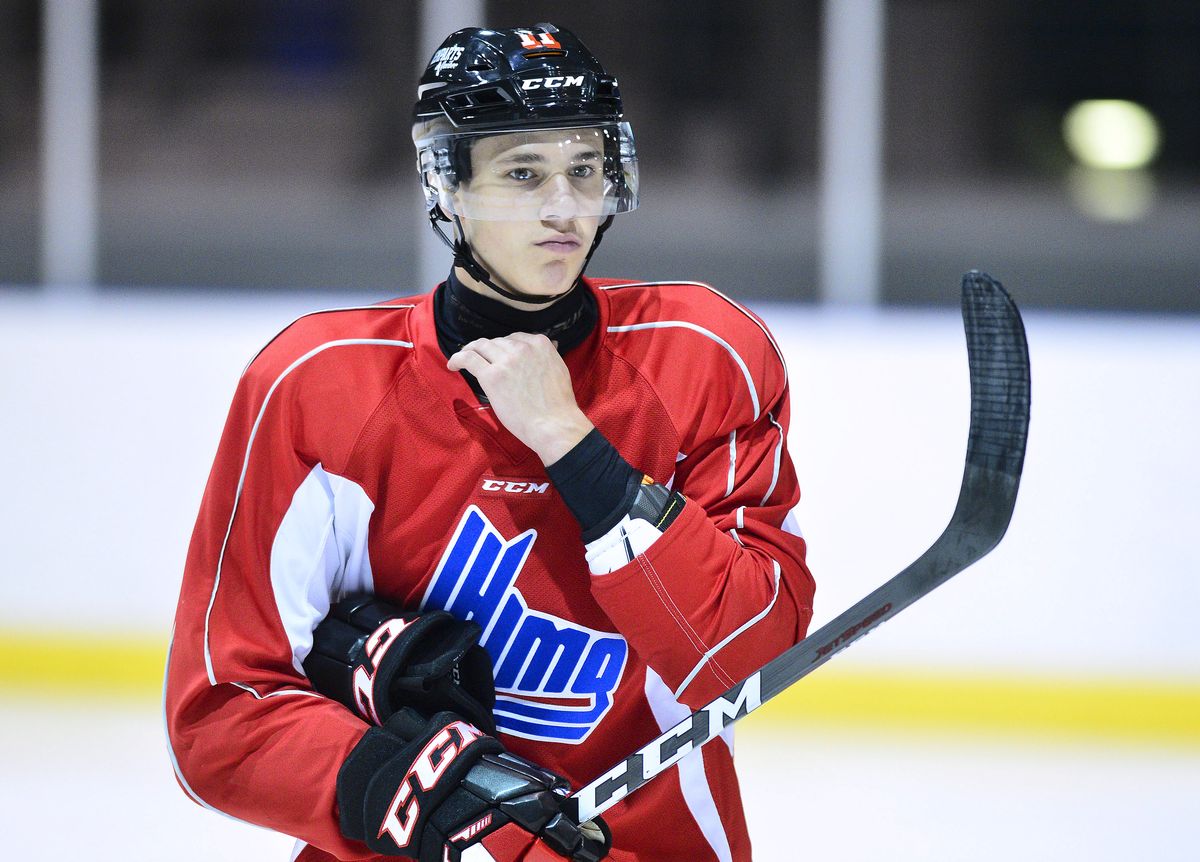 Malatesta is a fun player to watch unless you root for the team playing against him. Selected by the Remparts in the seventh round of the 2019 QMJHL draft, the Kirkland, Quebec City is small in stature, big in heart and determination. He forged a tremendous rookie season in 2019-20, posting 23 goals and 22 assists in 59 games while playing as a 16-year-old rookie. Unfortunately for Malatesta, the Remparts played only eight games this season (Sherbrooke is the only team to play less games). In those eight games, Malatesta has been noticeable both on and off the puck despite an unimpressive stat line. He is a lunch-pail guy with skills who competes hard, owns a great shot and high motor, and brings an abrasive style to the rink every night. Simply put, Malatesta is a thorn in his opponent’s side. James’ style is comparable to Zach Parise, Brendan Gallagher, and Brad Marchand in that he is a pain to play against and is the kind of abrasive threat you want on your team.

Malatesta can be found causing havoc anywhere in the offensive zone, to inckude in front of the net. He is fearless in attacking the slot area but also knows when to dish the puck and hunts or jam away at a rebound. He also boasts a lethal one timer and snapshot — it is not only hard, but also accurate. Relentless and tireless on the forecheck, Malatesta is a menace to opposing defensemen. He is a pest who has no problem hitting, hacking, or doing whatever it takes to make his enemy uncomfortable.

Malatesta has decent speed and is an overall solid skater. He is smart and uses his teammates without forcing passes into coverage, plus shows the ability to be responsible in all three zones. Malatesta has a strong skillset but his hardhat mentality and work ethic is what should draw scouts’ attention. Despite the lack of games to view because of the shortened schedule, Malatesta continues to be a pleasure to watch.