NASHVILLE (The Draft Analyst) — The QMJHL boasts several notable prospects eligible for the 2021 NHL Draft. But what exactly sets them apart from their peers? When evaluating players, it’s probably a good idea to look for smarts and compete level in addition to pure puck skill. Questions must be asked, such as; is a player willing to get dirty to get the job done? Does he take a hit to make a play? How about the ability to drive the net without the puck and open a lane for his teammates? Additionally, does he have his head on a swivel in the defensive zone, or show a real understanding towards both basic and unique in-game situations? No matter the answers, the reality is that skill alone isn’t enough to get a player noticed once he reaches a higher level like Canadian major junior. And although perusing the web for YouTube highlight videos can be the quickest way to formulate broad opinions on players, one must also find the time to dig deeper to discover a prospect’s strengths and weaknesses both on or away from the puck.

Although the 2020-2021 QMJHL season already kicked earlier in the month, the sample size is too small to create the kind of thorough assessments that can answer most (if not all) the aforementioned questions. Therefore, our Danny McGillicuddy went into last season’s archives to get a real sense of what a few of the QMJHL’s top prospects may offer NHL clubs during a draft season that already has begun under nonstandard conditions. Danny is an experienced analyst with intimate knowledge of hockey’s intricacies, so be sure to follow along as he covers the QMJHL from start to finish. 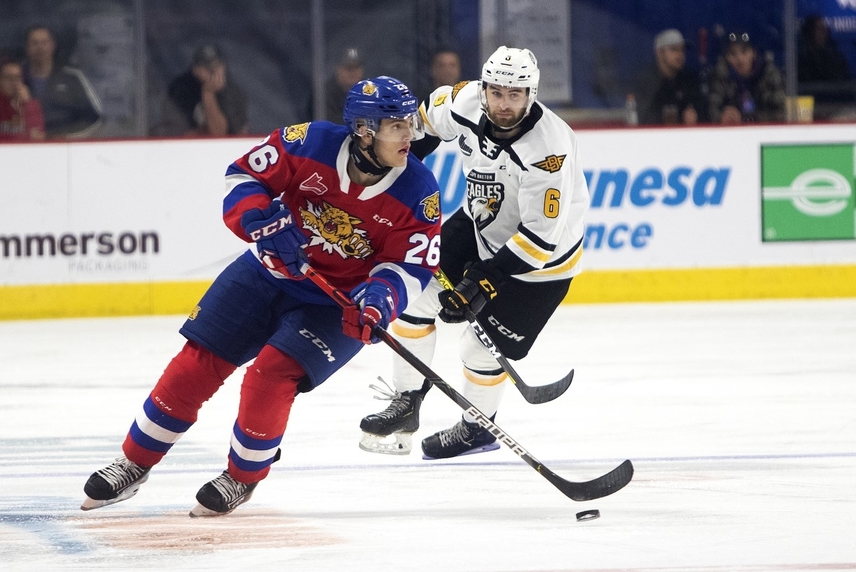 An energetic scorer who plays a heavy game, L’Heureux is listed as a center but primarily played left wing last season for a loaded Moncton Wildcats squad. He was later traded to the Halifax Mooseheads.

Although Moncton fielded a veteran filled roster, L’Heureux played a regular shift and was used on the power play. He was used up and down the lineup and in all situations, but more for his versatility than for a lag in play or effort. This kid has all the tools to be a tremendous NHL player. L’Heureux is smart, physical, possesses great hands, is good in tight areas, goes to the dirty areas and has an uncanny knack for appearing out of nowhere. He has a thick lower body which allows him to absorb contact along the walls without getting knocked off the puck. L’Heureux uses his powerful, efficient skating stride to gobble up ice and pull away from defenders.  He is not shy when it comes to the physical aspect of the game, as he had 70 PIM in 55 games. He will hit, dig in the corners, and do whatever it takes to win. You can expect L’Heureux to be counted on by the Mooseheads as they field a roster mixed with both youth and veterans. 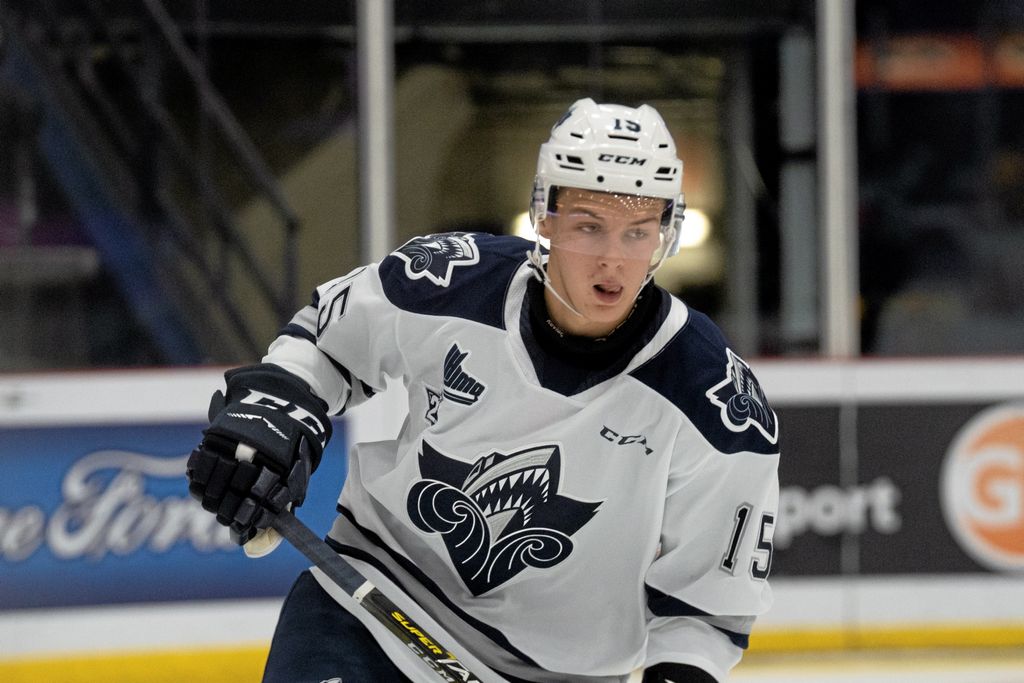 The reigning QMJHL Rookie of the Year and selected 14th overall in the 2019 QMJHL draft, Bolduc is an impressive center with ideal length who had a remarkable season as a standout on the same roster as Alexis Lafreniere.  He has a lean build but is very strong on the puck and in board battles. He has all the tools, size, smarts, awareness, hands, skates well and a quick release. Bolduc played on the first power play unit and killed penalties for the Oceanic on his way to a 52-point season. He is unfazed by the moment, plays in all critical situations, and is a team player. This year he has started on the point on the first powerplay unit almost in a rover role. He will drift throughout the offensive zone finding holes to get open. However, Bolduc does most of his damage in front of the net, anywhere from five to 15 feet from the crease. He goes to the greasy areas and is comfortable dishing a pass or letting it rip.  He has a challenging season ahead of him as opposing teams will focus on shutting him down.

With all eyes on #NHLDraft talent it was 2021 prospect Zachary Bolduc who made the biggest mark as the rookie scored his first @QMJHL 🎩🎩🎩 to lead @oceanicrimouski to a 5-4 victory over @Voltigeurs_DRU in Sunday’s #CHL on @Sportsnet action 🎥 pic.twitter.com/5m5mgo1dxy 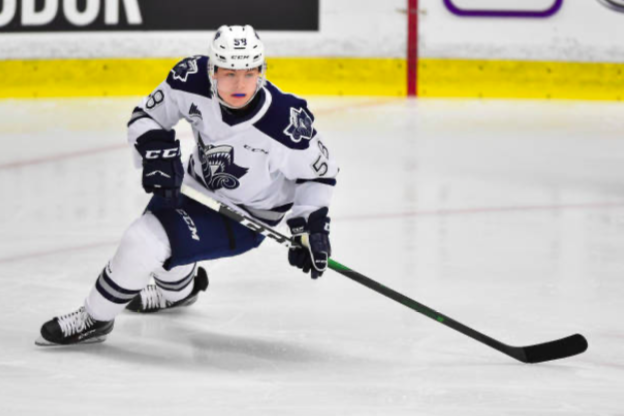 Belliveau was another Rimouski Oceanic who produced an impressive rookie season, although he did it from the back end and registering 53 points in 52 games. The point totals may be misleading in thinking he is a powerhouse offensive wizard who flies around the ice with end to end rushes, which is not necessarily Isaac’s game. The 6-foot-2, 180-pound rearguard relies on a high IQ and excellent passing. He sees the play in advance, placing tape to tape passes to lead the team to easy zone breakouts. Once in the offensive zone, his teammates better have their sticks on the ice and be ready for a pass from the gifted blue-liner. He will freeze the goalie by faking a shot then throw no look passes through the seam to the offside winger. Belliveau’s overall game is solid. He does not possess a wow factor with his skating and dynamic plays. He simply plays within the team oriented concept, similar to Adam Fox of the New York Rangers. He is sound defensively, not a risk taker, and is one of those players who always seems to make the right play at the right time. His skating is not the best, but he gets to where he needs to be at the correct time. He plays both the right and left sides as Rimouski has a young, left-handed dominated core on defense. He will log tons of ice time and be heavily counted on to lead the defensive unit. 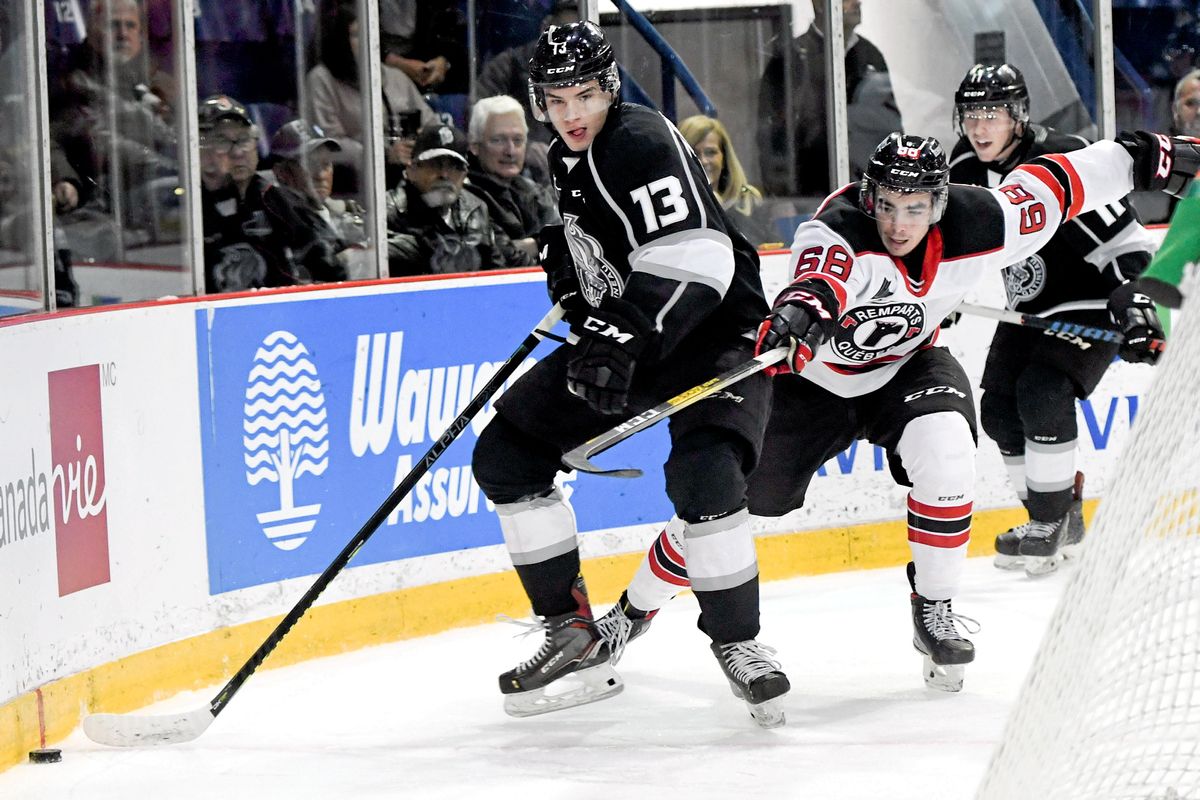 Landry is captain for the Gatineau Olympiques; a rare distinctation held by any first-year draft eligible . He is entering his third season and is an impressive hockey player. He looks bigger than his listed height and plays a big man’s game. Manix is a do-it-all player who is strong in all three zones. He has a high motor but does not run around without a purpose. When there is a loose puck, Landry kicks it into high gear to retrieve it. In the chip-and-chase game, Landry will either win his foot races, deliver a hard check, or support a teammate in battles of their own. Landry is far from a puck gazer, and his high compete level sets the example for others to follow.

Landry has an uncanny knack for making passes while in stride, often catching opponents off guard. In regards to his shot, Landry has a quick release, is accurate with attempts, and also passes and processes plays at a high level. He is defensively responsible with his head on a swivel. Landry is both quick and fast, and he uses those assets to force the pace and cause defensemen to give him space. He is a no-nonsense player leading by example who does not take a shift off and is already off to a strong start this season. Gatineau has a young team with only eleven skaters at or above 18 years old and will continue to look for Landry to lead them to a playoff birth and beyond. He is a treat to watch.

How about that skate to stick move for Manix Landry to set up yet another Zach Dean goal for @LesOlympiques?! 🔥 pic.twitter.com/44PugMuBWK 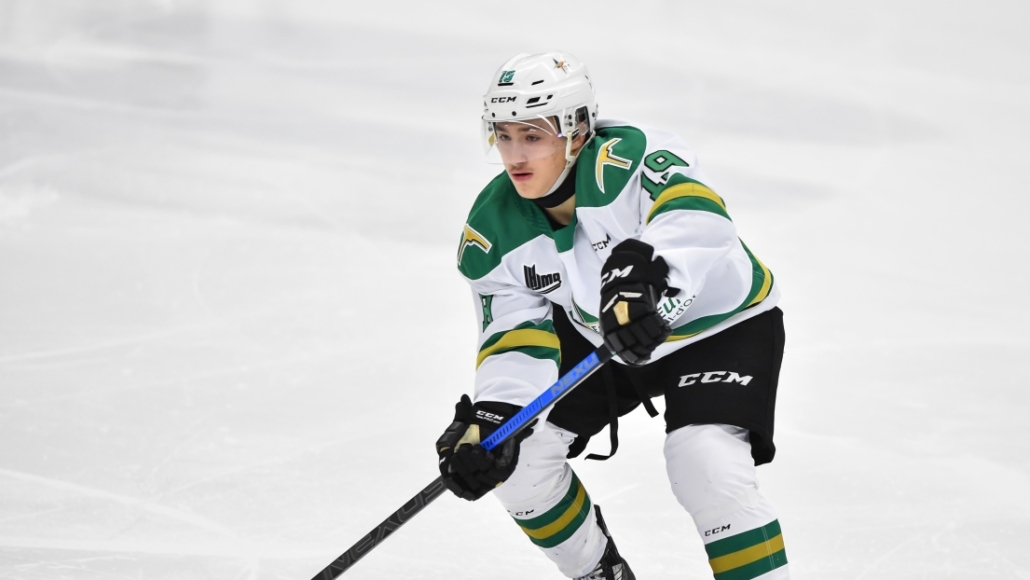 Selected second overall in the 2019 QMJHL draft, Robidas is a dependable second-year center for the Foreurs. The right-handed pivot has a presence about his game. He carries himself with confidence but not in a cocky manner, and he plays as if he knows he belongs. The son of former NHL defenseman Stephane Robidas, Justin is a smart playmaker with great hands who skates extremely well and possesses a lethal release on his accurate shot. He works the side wall on the power play, where he uses his high IQ and patience to create chances for his teammates regardless of where they are stationed.

Robidas uses patience and puck savvy to set up his own shot. Although there does not appear to be one stand-alone skill that sets Robidas well apart from his peers, his ability to perform at a high level in multiple areas both on and off the puck is what helps offset his lack of size. He is quick and fast but understands when and how to use those mobility assets. Rather than constantly move at a feverish pace in a north-south direction, Robidas can change his pace to control the play and allow teammates to find open spaces. His ability to attack either with speed or patience when combined with his elite vision and awareness creates matchup problems for opponents. Off the puck, Robidas is both sound and smart; rarely is he caught on the wrong side of the puck or player in his own end. He battles and competes hard, but Robidas also shows a willingness to get his nose dirty. The fact that the veteran-laden Foreurs continue to rely on him in addition to naming him assistant captain is a testament to the intangibles he brings beyond the skating and scoring. 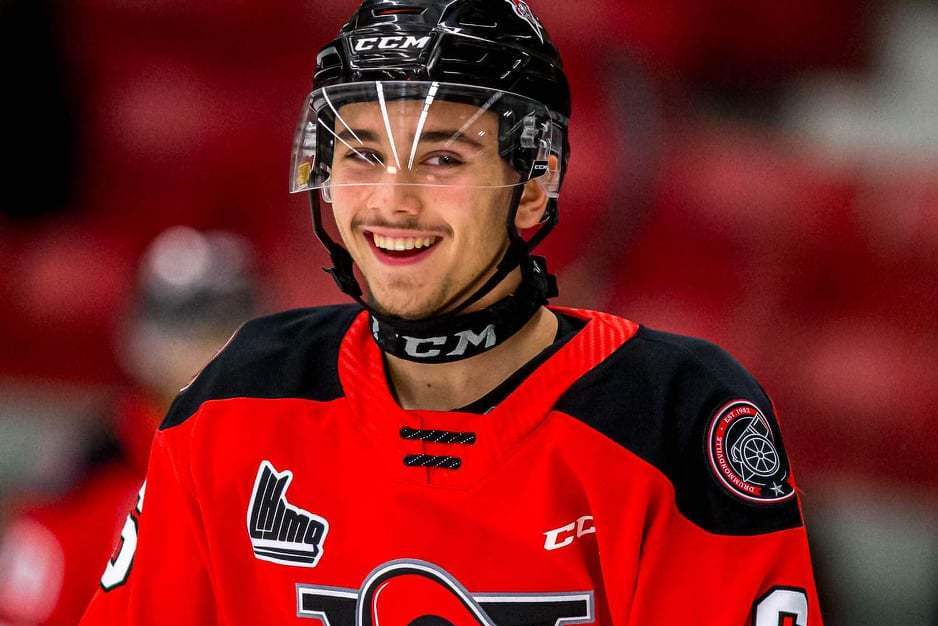 A third-round pick from the 2019 QMJHL draft, Agostino is an undersized spark plug who displays impressive speed and relentlessness. Although listed as a center, Agostino but has played mostly wing. He throws his weight around with little regard for his own safety and he plays bigger than his 5-foot-7 listing. Agostino also is smart on the puck and exhibits good hands in addition to showing a willingness to do what it takes to win a game. He is relentless on the forecheck and backcheck, stands up for his teammates, and is counted on in all situations. Agostino uses his legs to change the passing angles, allowing him to hit a teammate in stride. He has no problem battling for loose pucks on the boards, so the physical aspect clearly does not deter Agostino. At times, his aggressiveness will lead to him taking himself out of position, but he is the type of player who seems to be a coach’s dream. If Agostino can harness his energy and show a bit more patience, he could blossom into an even more effective player. He’s already off to a strong start in 2021 with four points in his first four games. 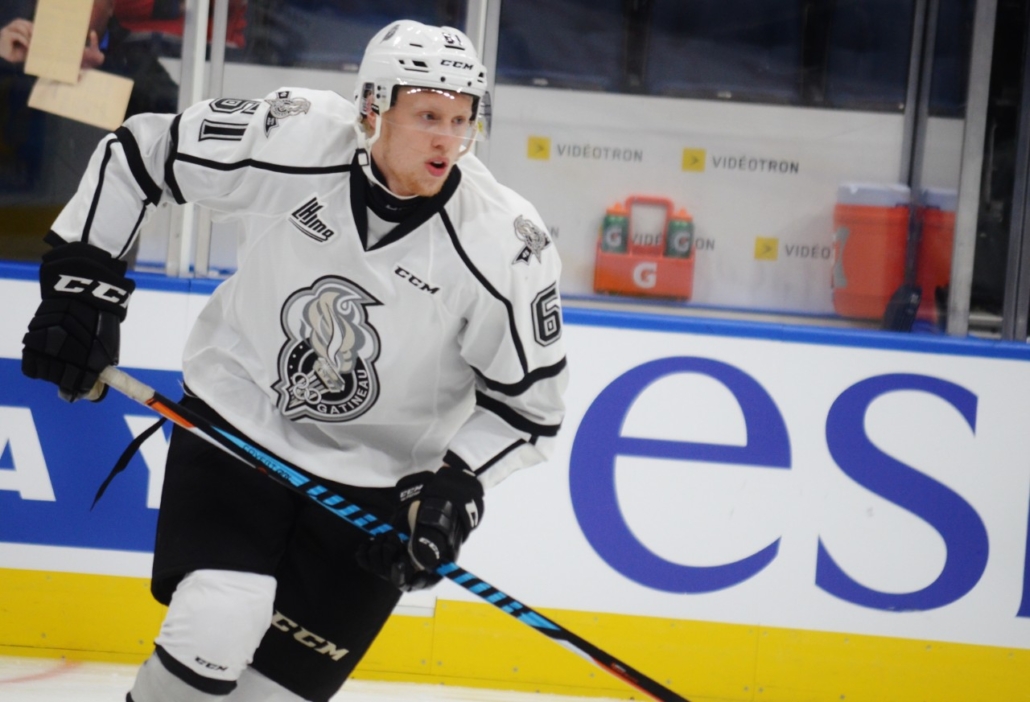 Blessed with impressive size, Roelens is an incredibly raw specimen who at this point in the early season is somewhat difficult to assess. His greatest attributes beyond his listed measurement appears to a good attitude and impressive hockey smarts. Still, the native of Belgium uses his size effectively by playing strong along the wall and appearing comfortable with his back to the play. Some shifts he looks to be skating well; others he can to have trouble moving away from pressure. But his high IQ allows him to be in or around the puck on every shift, and he makes the long passes look as easy as the soft, short ones. Selected 40th overall by Cape Breton in the 2019 QMJHL draft, Roelens is a battler who does not quit and supports his teammates. With his strong work ethic, he should be expected to improve his skating.  An easy choice to root for because of his effort.