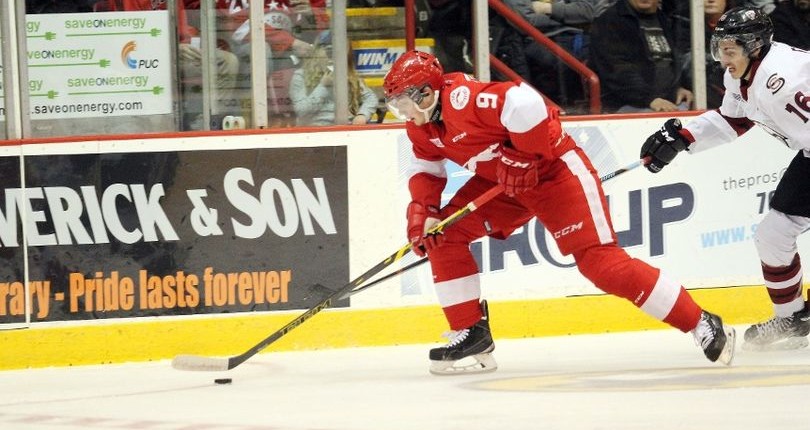 Position: Right Wing
Shoots: Right
Height/Weight: 6’1 192 lbs
Born: March 30, 1997, Ottawa, ON
Central Scouting Rankings (Prelim/Mid/Final): NR/ 56th NA / 38th NA
Obtained: Selected by the Sault Ste Marie Greyhounds in the third round (51st overall) in the 2013 OHL Priority Selection
Notes: 2014-15: Earned 2nd Team OHL All-Rookie honors after he placed second among first year players with 26 goals and 45 points…Finished third in OHL Rookie of the Year voting with 25 votes…Named OHL Rookie of the Month for December after he scored six goals with seven assists in 10 games…His estimated points per 60 mins (eP/60) was sixth (3.42) among all OHL right wings as he placed 41st among his peers with an estimated time on ice (eTOI) of 12.37 minutes per game…Ranked T-20th in the entire OHL in estimated ES points per 60 mins (2.39)…Was second among OHL rookies in playoff goal scoring with four…Expected to become highest drafted player ever developed by the CCHL’s Smiths Falls program.

It’s hard to imagine one of the draft’s biggest risers (possibly into the first round) is nothing more than a previously unnoticed depth player on his junior team. Granted, that team is the OHL’s powerhouse Sault Ste Marie Greyhounds, which in itself tells you how competitive it must have been for a special talent like Zach Senyshyn to gain some ice time (in his draft year no less). Well, it was very difficult for Senyshyn to get opportunities to show what he can do, as he ranked near the bottom in ice time among right wings in the entire circuit. Still, he made the most of being used sparingly, and his ice time eventually increased along with an uptick in offensive zone opportunities. When coaches yammer about attacking the net (where “good things happen”), you get a sense they only have two or three guys on their roster who actually do it. Blessed with blinding speed and a fearless attack mentality, Senyshyn is the type of player who provides that kind of edge teams look for in a player; hard charging but calculated and in control. He’s been compared to New York Rangers’ power forward Chris Kreider, who (love him or hate him) would be a welcomed addition on any NHL roster. Senyshyn, who wasn’t even given a letter rating by Central Scouting in their preliminary list, has a very good shot and can score in a number of ways. He’s at his best, however, when he’s in full flight, beating defensemen to the outside or inside and taking the disc right towards the blue paint. If there was an area or two where he could certainly work on, it would be his playmaking ability, and decision making when bulldozing through a Gustav Line of defenders is not an option. Those things can be improved on with experience. For now, he’s an outstanding option for the wing and is certainly going to make his coach at the next level very happy.