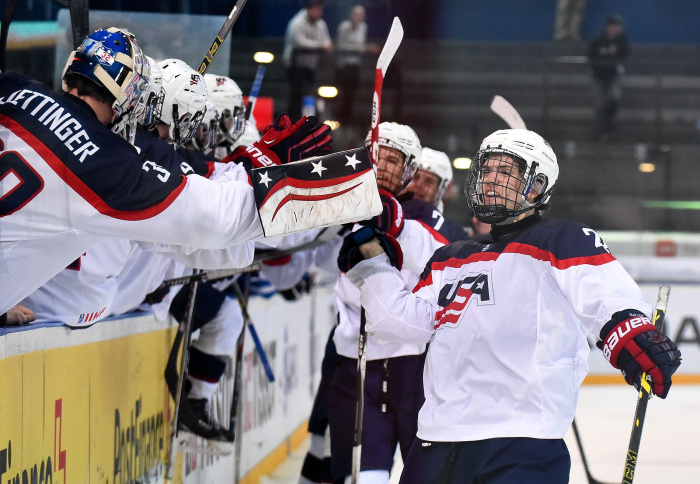 Position: Right Wing
Shoots: Right
Height/Weight: 6’1 183 lbs
Born: January 29, 1997, Columbus, OH
Central Scouting Rankings (Prelim/Mid/Final): ”B“/ 52th NA / 39th NA
Obtained: Joined National Team Development Program on August 26th, 2013…Committed to Miami University (OH) on August 9th, 2013.
Notes: 2014-15: Finished tied for fifth in scoring at the 2015 U18 World Championship with six goals and five assists, including the game-tying tally in the third period in Team USA’s 2-1 OT win over Finland in the gold medal game…Registered a team-high eight power plays goals and placed fourth on the U18 team in both assists (52) and points (79)…His points per game nearly quadrupled from 0.38 after his first 16 games (one goal, five assists in 16 games played) to 1.49 (26 goals, 47 assists) in last 49 GP…Had four goals and four assists at 2015 Four Nations Tournament, including a hat trick vs. Switzerland.  2013-14: Tied for Team USA lead with six power play goals…Scored eight goals and added five assists in 14 combined international games to help Team USA’s U17 team win titles at the 2014 World U17 Hockey Challenge, and both the Five Nations and Four Nations tournaments…The Columbus, OH native is the first Central Ohioan to be accepted into the NTDP.

The race is on to find out which post-1st round prospects are not only the closest to being NHL ready, but who can be a real steal as well. For a while, it seemed as if Jack Roslovic was the kind of player who was neither. That was until a pep talk from his coach (and added ice time with a great player like Auston Matthews) helped a fiery kid from Central Ohio rocket up everybody’s draft rankings. Once relegated to a support role on the National Team Development Program, Roslovic changed his fortunes by being less passive and far more the hunter rather than the hunted. Blessed with excellent straightaway speed and playmaking abilities, his proficiency at scoring goals was showcased on a nightly basis. His bread and butter is passing the puck, which for a while was all he did. Now we know he can not only wire it, but be elusiveness enough to find those areas where the probability of scoring multiplies. Roslovic has an excellent release and requires little backswing to get velocity on his shots. If he fills out more, he can be classified as a competitive power forward who can do a ton of damage off the forecheck since he has excellent vision and passing abilities. His situation is similar to Kevin Hayes in that his size and new-found goal scoring prowess now classifies him as a goal-scoring winger, when in actuality he’s more of a pass-first playmaker who can play the pivot. Where he fits is for the NHL team who picks him to figure out. For now, his all-world second half is enough to view him as a versatile star in the making with unlimited potential.