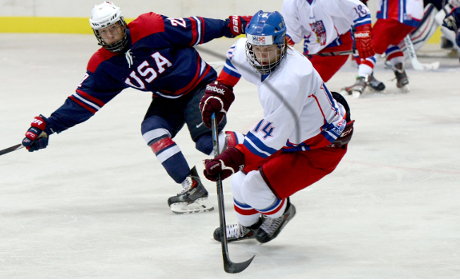 Position: Center
Shoots: Left
Height/Weight: 6’1 196 lbs
Born: June 3, 1997, Brno, CZE
Central Scouting Rankings (Prelim/Mid/Final): ”A“/ 17th NA / 18th NA
Obtained: Selected by the Charlottetown Islanders in the first round (11th overall) in the 2014 CHL Import Draft
Notes: 2014-15: Named to QMJHL All-Rookie Team after tying for league lead in both rookie goal scoring (33) and power play goals (10), and finishing fourth in points per game (1.17)…Established single-season team records for most goals and points (75) by a rookie…Played for Team Cherry at 2015 CHL Top Prospects game….Did not register a point in three games for Czech National Team at 2015 U18 World Championship. 2013-14: Registered one assist in seven games at the 2014 U18 World Championship…Played for Sparta Praha of the Czech Republic’s junior league, where he tallied a team high 16 goals and 35 points in 38 games…Finished fourth in team scoring with a goal and four assists in five games at 2014 Ivan Hlinka Memorial Cup…Selected in the second round (83rd overall) by Lev Praha in the 2014 KHL Draft.

One of the many fine draft-eligible imports who helped the Canadian Hockey League shape the 2015 Entry Draft, Filip Chlapik is a versatile playmaking center who moves the puck quickly and with accuracy. He is a very good skater with good balance and lateral movement who can move and carry the puck extremely well. His strength, however, lies in his ability to identify where both he and the puck need to be. If the puck is headed up the ice, you can be certain Chlapik is going to position himself towards an area where he can either lend puck support or create a quality chance. His elusiveness is more by design than reactionary in that he can read plays very well and get into open spaces quickly. He is also a devastatingly accurate passer off the rush, and can thread the needle through a maze of sticks and bodies. While he could top out with a power center’s build, it’s not the kind of player he’ll develop into. A fearless and imposing presence he is not, and it makes you wonder how many scoring chances he didn’t create by simply not being engaged. Defensively, he’s solid and aware in his own end. He could stand to work on faceoffs (49% — 41st among centers) but he is sound enough positionally to where his lack of involvement in defensive zone mucking and grinding works as an advantage. In other words, he’d rather wait for the puck to come lose and do something with it rather than get bogged down in a board battle.