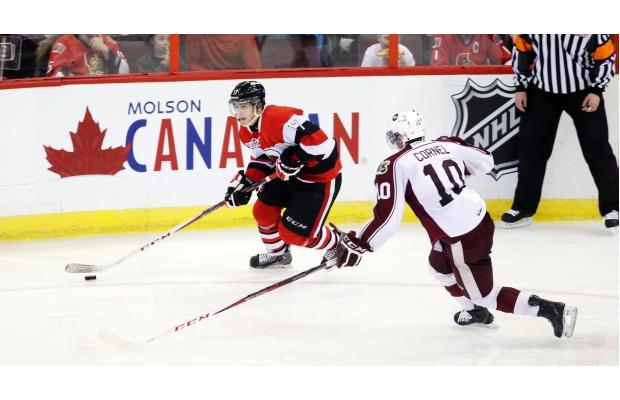 Position: Right Wing / Center
Shoots: Right
Height/Weight: 5’10” 176 lbs
Born: March 11, 1997, Clachan, ON
Central Scouting Rankings (Prelim/Mid/Final): “A” / 26th NA / 14th NA
Obtained: Drafted by Ottawa 67’s in the 1st round (1st overall) in the 2013 OHL Priority Selection
Notes: Finished second in team scoring in goals (29), assists (39) and points (68) while leading the 67’s with three shorthanded goals…His points-per-game average nearly doubled from a first half average of 0.88 to a staggering 1.55…Missed final two weeks of the regular season with an apparent right shoulder injury he suffered against Mississauga on March 8th…Named team captain on October 9, 2014 despite being one of the youngest 67’s… Given MVP honors at 2015 BMO CHL Top Prospects game following his three-point effort (two goals, one assist)…Named 2014 OHL Rookie of the Year after he led all league newcomers with 70 points (26 goals, 44 assists)…Tallied five goals and and assist while serving as captain to Canada’s gold-medal winning squad at the 2014 Ivan Hlinka Memorial Cup…Drafted by Dinamo Riga in the first round (25th overall) in the 2014 KHL Draft.

Ten years ago, you’d probably classify Konecny as the kind of undersized player who’s draft day fate was out of his hands before he even hit the ice. But times have changed, and we are seeing more players like the Ottawa 67’s skilled captain come to the forefront. It is very difficult to pinpoint what Konecny’s best assets are simply because he is just so darn good at so many things; he hits, he scores, he skates, he leads and he delivers. Konecny possesses the determination, speed and goal scoring abilities of Zach Parise, but also provides leadership, physicality and dependability. You will rarely, if ever, see this kid take a shift off. He plays through pain. He plays through adversity and he does so with a predatory mindset. Konecny possesses an arsenal of moves and ways to create space; he is extremely difficult to telegraph and wargame because he is one of the few draft eligibles who can make plays while moving at a very high rate of speed. Konecny is just as dangerous being kept to the outside as he is in the slot, as teams remarkably seem to lose him despite being Ottawa’s best player. His elusiveness and vision make him as dangerous without the puck and he is with it on his stick. As mentioned before, he’s not big (5’10) but he has a thick enough frame to withstand a lot of punishment, and when he hits you, it accomplishes his intent. He makes smart decisions, working through situations while leading and communicating both on the ice and on the bench. A very smart and savvy leader who is wise beyond his years. Gamer mentality with star potential.