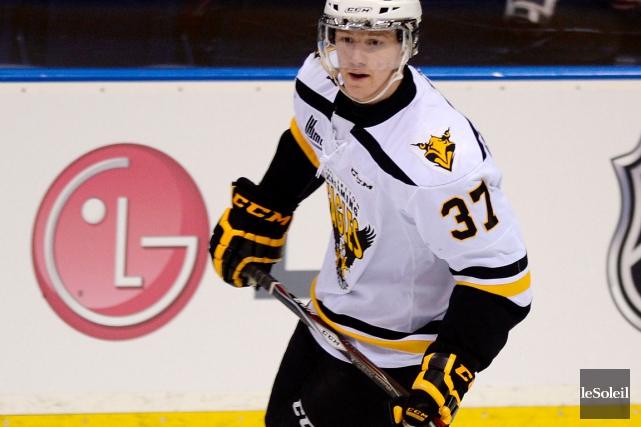 Position: Right Wing / Center
Shoots: Left
Height/Weight: 6’2″ 199 lbs
Born: October 31, 1996,  Neftegorsk, Russia
Central Scouting Rankings (Prelim/Mid/Final): “B” / 21st NA / 17th NA
Obtained: Drafted by Cape Brenton Screaming Eagles in the 2nd round (63rd overall) in the 2013 CHL Import Draft.
Notes: Named to 2015 QMJHL All-Rookie Team after he led all first year players in points-per-game (1.42), tied for first in power play goals (10) and finished second in both goals (32) and points (78)…Tied for second among QMJHL rookies in playoff PPG average (1.00) and was fifth in postseason assists (six)…Missed nine games with a lower-body injury, and was suspended for three more after an illegal hit…Drafted by Ak Bars Kazan in the 1st round (2nd overall) in the 2013 KHL Draft.

Another big, skilled forward who can take over a game, Svechnikov is a sniper who thrives in open-ice. He possesses a combination of skill and power similar to fellow CHL’er Pavel Zacha, only Svechnikov is a slightly better playmaker. He can play both wing positions as well as center, but his goal-scoring abilities makes him better suited for one of the flanks. That doesn’t mean he isn’t capable of playing the pivot — he most certainly can, and is actually quite responsible in his own end for an offensive forward. He’s a very good skater with speed and acceleration, and can release a quick or heavy shot off the rush or standing still. A gifted scorer who can score from an assortment of shots, Svechnikov also owns a pair of very soft hands, which helps him corral tough passes and is extremely quick at transferring difficult or inaccurate passes onto his stick blade and into shooting position. He is willing to fight for loose pucks and positioning, and does not give up on plays, especially along the walls where he showcases good use of his body. He plays quite comfortably in a physical game and does not get rattled; he’ll even deliver solid checks  and play with an aggressive edge. Svechnikov has a habit of trying to do too much and make plays tougher than they should be; with his skills, it would serve him best to make the smart or safe play on occasion, rather than try to achieve highlight-reel results every shift.