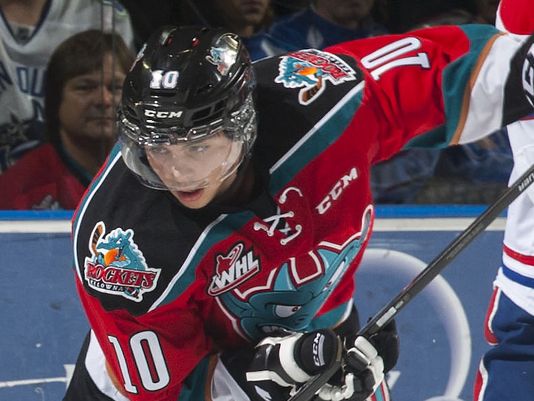 Nick Merkley has all the tools to become a very good player at the next level, but his gaudy offensive numbers do not necessarily make him a flashy forward. He is a hard-nosed player with excellent vision who creates plays more from his hard work than from any sort of elite, God-given talent. You would think a player with an assist-to-goal ratio of over 3:1 was some sort of sublime, “Pass First” playmaker, but each one of his assists seem to have its own unique story. He does not waste time looking for a better opportunity; once he has the puck, it’s off his stick on onto a teammate’s. This serves them well in that Merkley does not require a whole lot of chemistry with his linemates to create chances. Much like an elite quarterback who tells his receivers “get open and I’ll find you”,  Merkley has the ability under blanket cover to attack weaknesses and move the puck safely through the tiniest of seams. Merkley is not physically imposing, but he plays a very tough, physical game and never backs down or gets intimidated by a certain player or situation. While he does play a 200-foot game and is an excellent straightforward skater, Merkley excels in the quick, spur-of-the-moment transition game due to an excellent stick and thief’s mentality. He has a very good shot and a quick release, but he spends so much time along the walls and looking to set up plays that he doesn’t use it as much. His high assist total is a testament to his strong desire to win puck battles, but he should not be considered the kind of playmaker who furnishes scoring chances out of thin air every shift. He can play both center and wing, but likely better suited (and looks more comfortable) on the flank. Overall, an excellent two-way skill forward who can play a critical role on special teams and sets a great example for others to emulate.