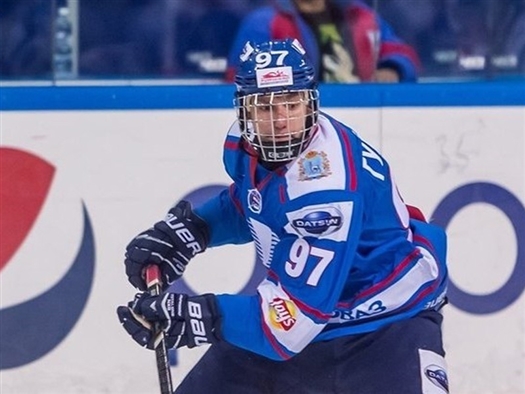 Position: Right Wing
Shoots: Left
Height/Weight: 6’2″ 189 lbs
Born: June 7, 1997, Togliatti, Russia
Central Scouting Rankings (Prelim/Mid/Final): NR / 7th Eur / 7th Eur
Obtained: Selected by Lada Togliatti in the 1st round (42nd overall) in the 2014 KHL Draft
Notes: …Appeared in eight games and registered one assist for Lada Togliatti of the KHL after he scored 15 goals and 25 points in 23 games for their junior club…Led Team Russia in goals (6) and points (7) in five games at 2015 IIHF U18 World Championships…Tied for team scoring lead with five points (three goals, two assists) in six games for Team Russia at 2014 World U17 Hockey Challenge…Combined for 14 goals in 20 games over his last four major international tournaments…

The seemingly pervasive fear within North American hockey circles regarding Russian-trained draft eligibles is kind of 1980’s, no? You would think the Red Wings under Neil Smith’s guidance put that sort of concern to bed in 1989. Hearing the term “Russian factor” should be nails to a chalkboard for outside-the-box thinkers, and its ad nauseum usage is nothing more than passive xenophobia. There is no “Russian factor” if a GM is a good salesman. Worrying about whether or not a player will cross the pond to play for them says more about the guys running the team than the player they’re scared of drafting. Besides, a team is more likely to get a KHL prospect suited up and ready for the NHL faster than most NCAA picks, who stay in college for four years and at least a full season in the AHL. Russian players want to play in both the KHL and NHL. The sooner teams realize that, the sooner stud prospects like Denis Guryanov will be valued the way he should be — as one of the best players available in this draft of any national origin. He’s dominated practically every international tournament he’s participated in, using physicality, speed and a world class shot to make quite a name for himself.

He’s usually the most skilled player on the ice at any given time. Guryanov has an excellent shot and release; he’s most certainly a natural goal scorer who is very clever around the net. His release is lightning quick and can also fire off a pretty wicked backhander off the rush. Guryanov is also super competitive and plays with a strong desire to win and be the best. He uses his powerful leg drive and upper body strength to deliver solid body checks, but he can also dominate a cycle by protecting the puck with a long reach and sound positioning. He’s shown flashes of being a playmaker, but he can also over-handle the puck and make questionable decisions. Like most offensive forwards, his commitment to the defensive zone is a work in progress, but he’s always involved in the play and does not shy away from the dirty areas in either zone. Projects to be a top-six scoring forward who can be used in either special teams situations. A first-round lottery talent for sure.