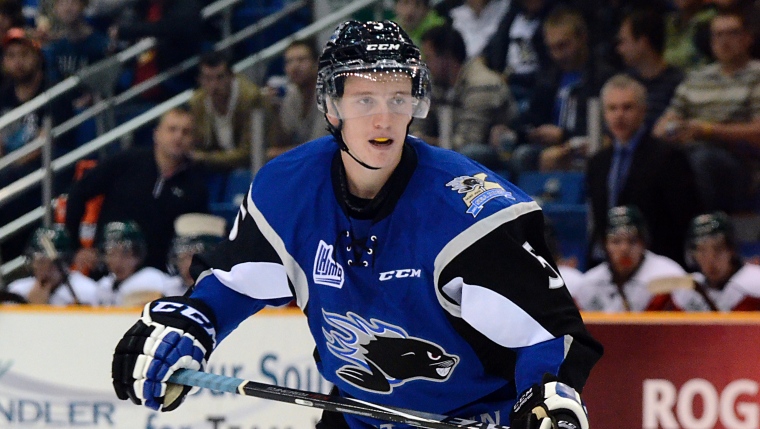 Position: Defenseman
Shoots: Left
Height/Weight: 6’2, 180 lbs
Born: January 30, 1997, Sainte-Marie, QC
Central Scouting Rankings (Prelim/Mid/Final): ”C“/ 15th NA / 16th NA
Obtained: Drafted by the Saint John Sea Dogs in the 2nd round (22nd overall) in 2013 QMJHL Entry Draft
Notes: Topped Saint John defensemen in scoring with 41 points (12 goals, 29 assists) in 66 games…Tied for 10th among QMJHL defensemen in goal scoring and tied for 13th in points…Tied for most points by a Team Canada defenseman with a goal and four assists  during bronze medal-winning performance at 2015 U18 World Championship…Had a goal and 21 assists in 55 games for the Sea Dogs as a rookie in 2013-14 — the fifth most points by a QMJHL freshman blueliner that season.

It may not be the most popular opinion, but Thomas Chabot could actually be one of the big sleepers to come out of the upcoming Entry Draft. His recent rankings on various charts may say otherwise, but his rise from a mid-round gamble to a possible top pick is nothing short of meteoric — this is a player who was a healthy scratch just a few games into his draft season. Nevertheless, Chabot got the message, got back into the lineup and ran with an opportunity to eat minutes while playing in all situations. His skating is outstanding for his size and position, and his ability to weave in and around traffic at a very high rate of speed while maintaining control are the main reasons why he’s ranked so high. He’s a very good passer and playmaker from the back end, but both he and draft-eligible teammate Jakob Zboril were not the beneficiaries of playing with potent forward lines, specifically on the power play. Still, he was impressive making end-to-end rushes and joining the attack to provide puck support — he has an excellent nose for where to position himself for a drop pass. He has a very good shot and is not a fire-and-forget shot compiler. Chabot is one of the QMJHL’s better defensemen at getting off quality shots from the circles in. His +35 improvement in plus/minus from the previous season is a testament to Chabot’s understanding of the duality of his role as a puck moving defenseman. It’s a very good sign when a player takes it upon himself to make the necessary sacrifices while doubling his point production in the process. Defensively, Chabot has excellent range, using his mobility to cover ground in a hurry. Of course, he still likes to gamble in the offensive end, but the difference from last season is that he thinks a second or two ahead of the play in order to allow his speed to give him that running start to cover ground and catch up. Providing Chabot with a stay-at-home partner may not necessarily mean he’ll play unbridled. He has become more aware of the gravity of his pinches, but he is quick enough with his footwork and stick to turn what may seem like a catastrophic ill-timed gamble into a simple change of possession or puck battle. Chabot has a very high ceiling as long as he continues to gain strength and work towards improving his ability to win board battles and slot wars.