Photo courtesy of the The Canadian Press 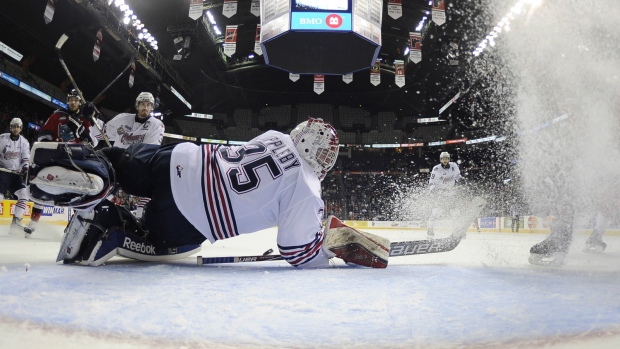 The Draft Analyst (New York) — Cole Cassels scored the go-ahead goal in the second period, and Ken Appleby made several key saves as the Oshawa Generals advanced to the Mastercard Memorial Cup Final with a 2-1 victory over the Kelowna Rockets.

Cassels, a Vancouver Canucks draft pick who led the Generals (3-0) in goal scoring during the Ontario Hockey League playoffs, broke a scoreless tie when he one-timed a Dakota Mermis feed past goaltender Jackson Whistle at 4:15 of the second. It was his first goal of the tournament and 11th of the postseason.

Tobias Lindberg increased Oshawa’s lead to 2-0 at the 17:16 mark of the middle frame by converting a 2-on-1. But Kelowna (1-2) responded 55 seconds later when Gage Quinney cut the deficit in half when he banged home an elevated pass from Tyson Baillie for his tournament-leading fourth goal.

Appleby faced only 10 shots through two periods but thwarted a flurry of Rockets chances in the third. Rourke Chartier hit the post early in the frame, and Appleby robbed both Dillon Dube and Leon Draisaitl from in close to maintain the Generals’ one-goal lead. He would later get a piece of a Nick Merkley shot before caroming off the iron and helped secure the victory with several key saves during a 5-on-3 late in regulation.

Appleby finished with 20 saves while Whistle stopped 27 of 29 shots for Kelowna.

Oshawa, which went 16-5 en route to their 13th OHL championship, won all three of its round robin games. The Generals will play on Sunday for their first Canadian Hockey League crown since 1990.

The Western Hockey League-champion Rockets await the winner of Wednesday night’s game between the Quebec Remparts (1-1) and the Rimouski Oceanic (0-2) to determine whether they play in Thursday’s tiebreaker or the semifinal on Friday. The semifinal winner meets Oshawa in the title game.