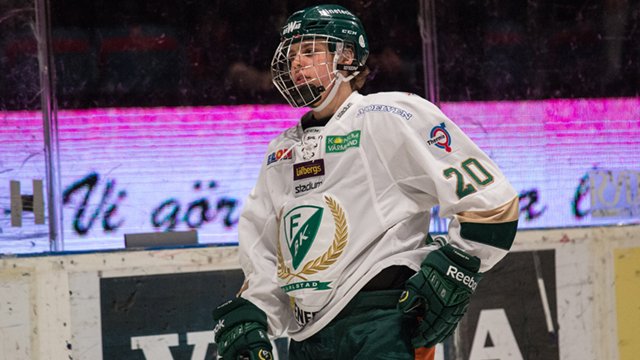 It wasn’t too long ago when Sweden’s development program was one of hockey’s Wonders of the World. In 2009, 12 of the first 50-odd picks, including seven first rounders, wore the embroidered “Tre Kronor” that season. And while it took the merits from a future crop of youngsters (2012) to finally win World Junior Championship gold after a 31-year drought, Sweden’s heralded Class of 2009 with the likes of Victor Hedman and Oliver Ekman-Larsson was supposed to be without peer. Sweden’s 2015 draft eligibles, however, are considered worthy enough to at least be held in the same conversation. Joel Eriksson Ek, a strapping center with the ability to dominate a game, is likely to be the first Swede picked in June. He has exceptional scoring touch for a kid whose numbers reflect his relegation to fourth line center duty after a mid-season promotion to Sweden’s senior circuit. Eriksson has very quick hands and can be an excellent finisher in scoring areas. While he has the reputation of a defensive center, Eriksson has certainly made the most of his role when its expanded. He is very tricky with the puck and his ability to make plays despite a high degree of difficulty makes him a danger at all times on the ice. He isn’t the most physical presence, nor does he use his size during puck battles the way you’d like him to, but he is a very hard worker and earns his money on every shift. He is a very good skater with a long fluid stride but lacks explosiveness. Eriksson’s one of the best two-way players in the draft, as proven by his gaudy SHL faceoff stats despite being only 17. He can be used in all game situations and in true Swedish fashion, likes to provide offense while on the penalty kill.