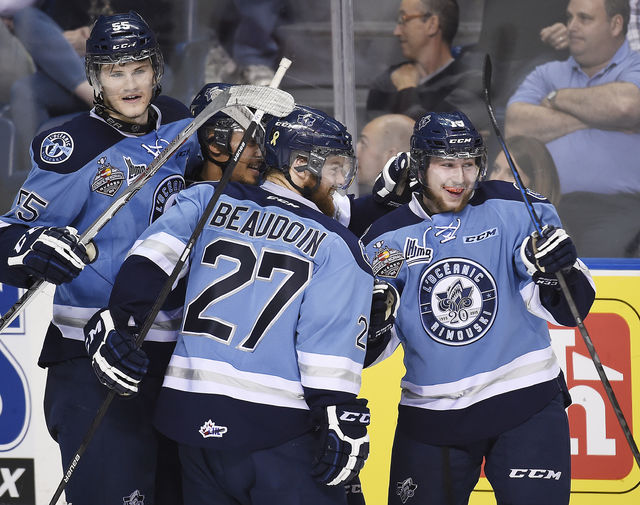 NEW YORK (The Draft Analyst) – Michael Joly had a goal and three assists, and Phillipe Desrosiers stopped all 27 shots he faced as the Rimouski Oceanic blanked the rival Quebec Remparts, 4-0, in the final round robin game of the Mastercard Memorial Cup.

Rimouski (1-2) will meet Quebec (1-2) in Thursday’s tiebreaker game to determine which will face Kelowna (1-2) in the seminal on Friday. The Rockets lone win was Monday’s 7-3 rout of the Oceanic. This year marked the first time in Memorial Cup history that three of the four teams each finished with a 1-2 record.

Joly assisted on a goal by Justin Samson with under five minutes left in the first period to give Rimouski a 1-0 lead. He would add a goal of his own at 19:05 as the Oceanic took a 2-0 advantage into the second period.

Joly completed his four-point night with assists on second-period power play goals by Chris Clapperton and Alexis Loiseau which increased the Oceanic’s lead to 4-0 and forced Remparts goaltender Zachary Fucale out of the game.

It was just last week that Joly clinched the Quebec League’s President Cup crown with a double-overtime game winner in Game 7 against Quebec. The undrafted right wing leads the Memorial Cup in scoring with six points (two goals, four assists) in three games after he netted 12 goals and 21 points in the league playoffs.

Rimouski dominated the contest, outshooting Quebec 42-27 and earning six power play opportunities. Desrosier, who is the first goalie to post a shutout in this year’s tournament, leads all Memorial Cup netminders in both goals-against average (2.41) and save percentage (.923)

Massimo Carozza and Jerome Verrier paced the Remparts with four shots apiece. Anthony Duclair struggled throughout the contest as his goal drought reached eight games. He appeared to have injured his shoulder midway through the third period and did not return.