Photo courtesy of the Tri-City Americans 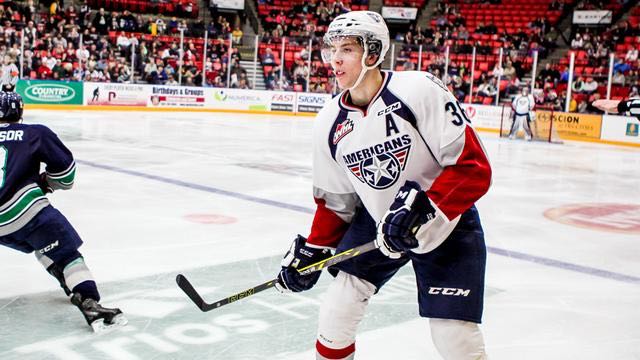 Position: Defenseman
Shoots: Right
Height/Weight: 6’5 199 lbs
Born: November 26, 1996, Colorado Springs, CO
Central Scouting Rankings (Prelim/Mid/Final): ”A“/ 16th NA / 25th NA
Obtained: Selected by the Tri-City Americans in the 10th round (214th overall) in the 2011 WHL Bantam Draft
Notes: 2014-15: Finished second to fellow draft-eligible Parker Wotherspoon among Tri-City defenders in both assists (21) and points (25)…Registered one assist and was +1 in five games for Team USA at the 2015 U20 World Junior Championship…Named as an alternate captain for Team Cherry at 2015 CHL Top Prospects game, where he did not register a point and was a -4…2013-14: Did not register a point and was an even rating in five games at the 2013 Ivan Hlinka Memorial Cup, where Team USA earned a silver medal…Selected by the Youngstown Phantoms in the first round (12th overall) in the 2012 USHL Futures Draft.

There’s an unwritten rule about avoiding the dangers of drafting a defensive defensemen in the first round. Generally, it makes sense, as there are more stay-at-home types in amateur hockey than those with two-way upside. Some even think its better to draft a defender with offensive upside because at worst, he’ll develop into a reliable player in his own end and play on a middle or bottom pairing. Brandon Carlo is sort of in between; he has very good mobility and a hard shot, but his size, massive reach and an unmatched intimidation factor among draft eligibles is why he’s a projected first rounder. He’s actually not bad in open ice, as he has a long, powerful stride. Carlo has excellent lateral movement and can really close in on an opponent, and his active stick and the aforementioned reach makes it extremely difficult to execute scoring plays and quality shots. His best attribute his denying entry into the zone. Forget about his size and the fear of getting pummeled; he provides literally no space to maneuver. Time and time again you saw onrushing forwards taking sharp 90-degree before the blue lone in order to avoid him. Naturally, he’s no picnic in the slot and in board battles. Carlo has an unique combination of defensive smarts and physical attributes. He may not put up points, but he’ll solve problems in other areas. He’s a dedicated worker and solid teammate who has the respect of those playing with him and against him. The stats are not stellar, but keep in mind that the Americans were beset by injuries yet still managed to sneak into the playoffs.