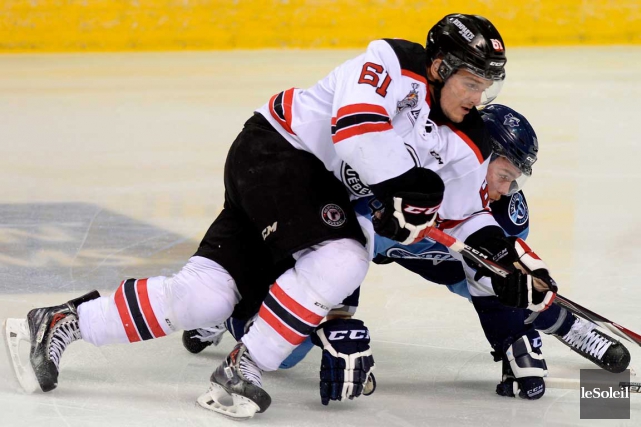 NEW YORK (The Draft Analyst) – Jerome Verrier scored twice and Adam Erne tallied the go-ahead goal late in the second period as the Quebec Remparts advanced to the Memorial Cup semifinal by eliminating the Rimouski Oceanic with a 5-2 victory.

Verrier opened the scoring with under three minutes remaining in the first when he tipped home a power play goal off a point shot from New York Rangers’ draftee Ryan Graves.  Rimouski (1-3) answered with a power play goal of its own when defenseman Samuel Morin, selected 11th overall by the Philadelphia Flyers in 2013, wired his first of the tournament past Zachary Fucale.

Anthony Duclair broke an eight-game goal drought with his first Memorial Cup goal to give Quebec (2-2) a 2-1 lead at 3:58 of the second. The Arizona Coyotes prospect showed no illefects from an apparent shoulder injury he suffered late in Wednesday’s loss to Rimouski.

Erne, a Tampa Bay Lightning prospect, gave the Remparts a 3-2 lead at the 16:54 mark of the middle frame just 47 seconds after Rimouski’s Jeremy Lepine tied the score with his first goal since December 11th. Erne took advantage of a misplay by Oceanic goaltender Phillipe Desrosiers and buried a loose puck which gave Quebec a lead it did not relinquish. Verrier made it 4-2 when he potted his second of the night at 19:19 of the second.

Marc-Olivier Roy capped the scoring midway through the third with his first goal. Graves finished with two assists and was a plus-3. Fucale, who on Wednesday was pulled after he gave up four goals in a 4-0 loss to the Oceanic, bounced back with a 30-save effort to claim his second win of the tournament. He will face Kelowna in the semis on Friday. The Remparts beat the Rockets in the tournament opener, 4-3. The winner will play the Oshawa Generals for the Memorial Cup on Sunday.

Desrosiers stopped 26 of 31 in defeat for Rimouski, which won the Quebec Major Junior Hockey’s League’s President Cup in a thrilling, seven-game series agains the Quebec.