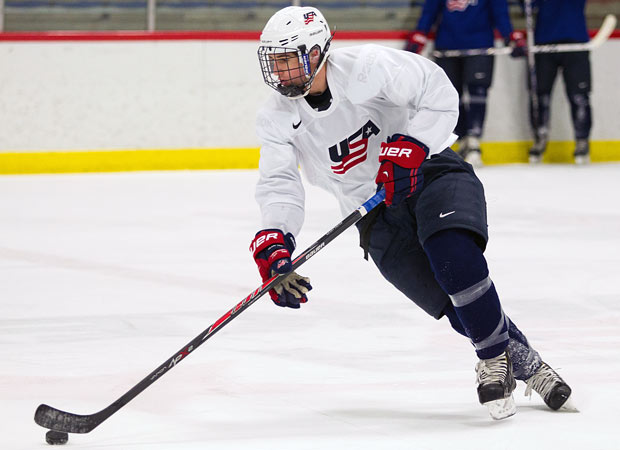 Position: Center
Shoots: Right
Height/Weight: 6’0 183 lbs
Born:January 30, 1997, Hanover, MA
Central Scouting Rankings (Prelim/Mid/Final): ”A“/ 27th NA / 29th NA
Obtained: Joined U.S. National Team Development Program in 2013…Committed to Boston College on March 10, 2012
Notes: 2014-15: Scored gold medal-winning goal in overtime versus Finland to clinch 2015 U18 World Championship for Team USA…Finished tied for second in the tournament in goals (six) and tied for eighth in scoring with nine points in seven games…Went 77-for-44 on faceoffs for the second-highest average (63.6%) among players who took at least 50 draws…Finished fifth on the U18 team in points per game during the regular season (1.00) with 23 goals and 54 points in 54 games….2013-14: Led U17 team in goals (33) and shorthanded goals (four) while placing second in scoring with 63 points in 47 games…Was the leading scorer at the 2014 World U17 Hockey Challenge with a tournament best 18 points, 10 goals and tying for the most assists with eight as Team USA won gold…Selected in the ninth round (148th overall) by the Quebec Remparts in the 2014 QMJHL Entry Draft.

White is a very good skater with good speed, but he is strong on his skates and difficult to knock off the puck. He has excellent balance and footwork; can start and stop and start again very quickly in either direction. White is what you would call a “tough out” when attempts are made to separate him from the puck, as he is very crafty and dangerous during board battles – he can whip a hard pass or elevate a soft pass off his backhand off a scrum. He is a very intelligent playmaker in the mold of Dylan Larkin in that he does not shy away from shooting and is rarely guilty of overpassing. He played on a line with fellow draft-eligible Jeremy Bracco, who is an outstanding playmaker from the wing. The Boston College-bound duo complimented each other offensively and Bracco’s artistry with the puck enabled White to showcase a very good shot and touch around the net. Defensively, he’s outstanding on faceoffs and has been a go-to guy in almost all of Team USA’s critical defensive-zone draws. White is very much an all-around athlete, but he thinks the game extremely well and can even get physical when the situation warrants it.