Rockets feast on Remparts to advance to Memorial Cup final

Kelowna exploded for nine goals to give Quebec a spectacular thrashing 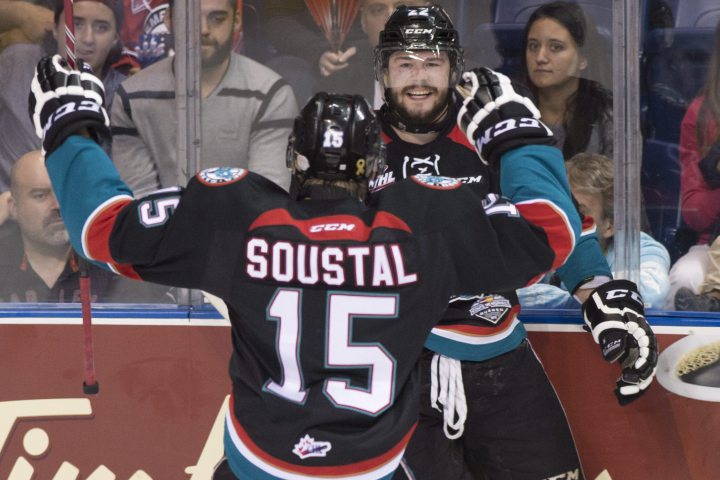 The Rockets advance to Sunday’s title game against the Oshawa Generals by eliminating the Remparts, who were playing their third game in three nights and final game at Pepsi Colisée. Quebec will open next season playing its home games at Colisée Videotron. Kelowna dominated for the entire game, outshooting the Remparts, 44-23 and receiving multi-point efforts from eight players.

Kelowna (2-2), which dropped a 4-3 decision to Quebec in the tournament opener on May 22, did not get off to the start it wanted. Adam Erne blocked John Morrissey’s wrist shot attempt and took the loose puck on a breakaway from the Remparts’ blue line in, beating Jackson Whistle through the legs for a 1-0 lead. The goal was Erne’s third Memorial Cup goal.

The Rockets tied the game 1-1 at 9:51 of the first when Chance Braid one-timed a neat backhand pass from Tomas Soustal over the outstreched glove of Zach Fucale. The score remained deadlocked into the second, but Edmonton Oilers prospect Leon Draisatl’s power play goal just 17 seconds into the middle frame began a four-goal onslaught the Remparts (2-3) would never recover from. Kirkland, a third round pick of the Nashville Predators in last June’s NHL Entry Draft, scored his first of the evening on the power play at 3:23 while parked alone in front of Fucale. He increased the lead to 4-1 just 43 seconds later after he converted a rebound of his own shot.

The game was delayed late in the second when fans at Colisée Pepsi showered the ice with debris after Madison Bowey’s takedown of Quebec’s Jerome Verrier went uncalled by the officials. Kelowna’s Dillon Dube was later hauled down by Ryan Graves on a breakway but his penalty shot attempt missed wide. Morrissey capped the scoring of the eventful second at 16:46 with a rocket from the top of the left circle over Fuclale’s glove.

Anthony Duclair opened the scoring in the third with his second goal in as many games to cut Kelowna’s lead to 5-2. The Arizona Coyotes prospect was alone in the slot when he took a nifty no-look feed from Erne and beat Whistle with a backhand-forehand deke at 21 seconds. But the Rockets ended any chance of a comeback  two minutes later when Chartier and Cole Linaker tallied 37 seconds apart to increase the lead to 7-2.

Dmytro Timoshov, the 92nd-ranked North American skater for the upcoming NHL draft, scored a power-play marker for the Remparts at 6:45. It was his third goal and fourth point of the tournament.

Tyson Baillie netted the Rockets’ third power play goal of the evening at 13:26, and Chartier closed out the scoring at 14:48 with his second of the night, ending  the highest scoring affair of this year’s tournament. Draisaitl and Morrissey finished with a goal and two assists. Whistle made 20 saves to pick up the win.