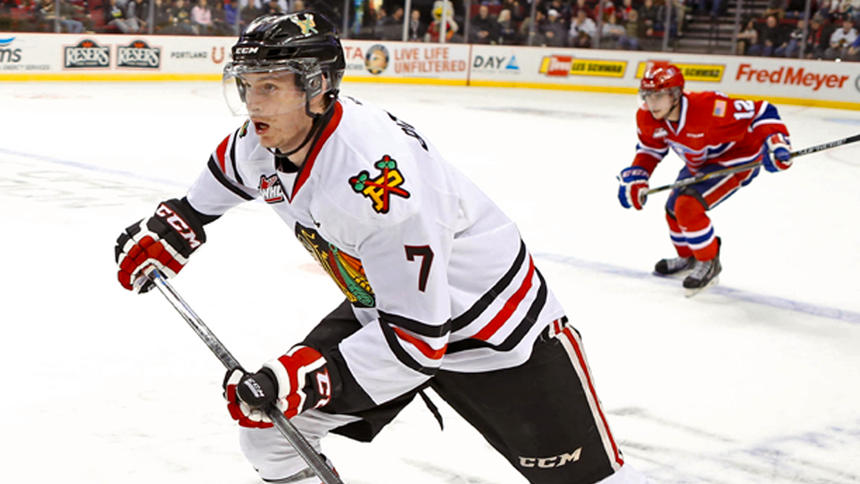 Position: Left Wing
Shoots: Left
Height/Weight: 6’4 204 lbs
Born: November 4, 1996, Crookston, MN
Central Scouting Rankings (Prelim/Mid/Final): ”A“/ 19th NA / 26th NA
Obtained: Signed with the Portland Winterhawks (WHL) on April 9, 2012 following his freshman season at Crookston High School (MN).
Notes: 2014-15: Finished fourth in team scoring with 71 points (34 goals, 37 assists) while playing most of the season on their top line…His 34 goals ranked tied for 16th in the WHL…According to CHLStats.com, Bittner had the second-highest age-adjusted points-per-game average (0.90) among all WHL left wingers…2013-14: Tied for sixth in team goal scoring with 22 goals in 63 games, but was kept off the scoresheet in all five of his Memorial Cup matches…2012-13: Averaged just over half a point per game (0.51) as a 15-year-old rookie…Tallied two goals and an assist to help Team USA win a silver medal at the 2013 Ivan Hlinka Memorial Cup.

Bittner is an intriguing prospect in that he has the size (6’4) and a shot/skill combination rare for a big man. It’s understandable to think that he compiled his points riding shotgun to Portland’s dynamic duo of Oliver Bjorkstrand and Nic Petan. It just wouldn’t be completely accurate. Bittner has proven to create plays and be a factor playing a lesser role, and has even played on defensive lines where he blocked shots and caused havoc on a forecheck. Blessed with a soft set of hands, the Minnesota native is adept at the possession game due to the way engulfs the puck and his keen vision. He’s actually a pretty good passer for a guy with a reputation as a sniper, sometimes to the point of being too unselfish. When he’s engaged (we’ll get to that later), Bittner is strong on his feet and uses his physicality to get to the net and stay there. His instincts in the tough areas near the crease are excellent; few are better than Bittner at corralling missed shots off the end boards while maintaining his position near the net. He plays a smart game, but tends to lose focus when the play isn’t happening in the offensive end. This is a common trait of skilled power forwards — they feel that the only way they can be effective is with the puck heading in one direction. With that, he can look disinterested as times. Nevertheless, his lethal shot and ability to get open where he can fire it makes him an excellent option.