Photo courtesy of the USHL 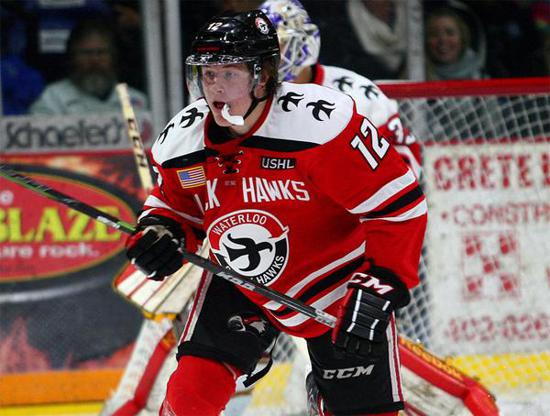 Position: Right Wing
Shoots: Right
Height/Weight: 6’1 192 lbs
Born: February 25, 1997, Burnsville, MN
Central Scouting Rankings (Prelim/Mid/Final): ”B“/ 28th NA / 27th NA
Obtained: Traded by Sioux City to Waterloo on May 6, 2014 for draft picks in the USHL Dispersal Draft…Committed to North Dakota on February 13, 2015
Notes: 2014-15: Named to 2015 USHL First All-Star Team after he tied for the league lead in goals (35) and finished third in overall scoring (68 points)…Registered 18 points in his last 12 games. 2013-14: Finished with four goals and an assist in five games to help lead Team USA to gold at the 2014 World Junior A Challenge…Tied for a tournament-best six goals and placed second with eight points while serving as captain for Team USA’s bronze medal-winning squad at the 2014 Ivan Hlinka Memorial Cup…Selected in the first round (4th overall) by the Sioux City Musketeers in the 2013 USHL Futures Draft.

Boeser is a good skater with good acceleration and speed, but what is more impressive is the way he maintains his balance. A pure goal scorer who can beat you in a variety of ways, Boeser is not afraid to get his hands dirty and fight for the territory that offers him the best chance to bury one. He has world-class scoring skills and possesses an arsenal of shots. He is one of the draft’s best at positioning himself to make the most out of a given play. And while he’s a very gifted playmaker with very good vision, he owns such a deadly shot that he was usually the go-to guy on the business end of set ups. Boeser is a unique talent in that he already owns an NHL build in addition to being very mature and humble. But he plays with desire and is a battler who continues to seek out scoring chances and makes plays no matter what the score or time remaining. The North Dakota-committ was dominant on the international stage as well.