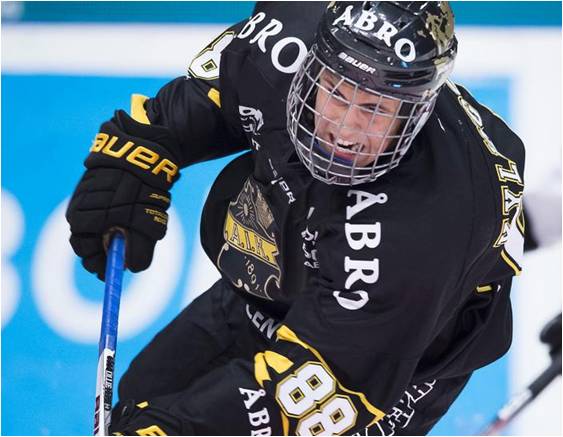 Position: Defense
Shoots: Left
Height/Weight: 6’0 lbs 185 lbs
Born: May 19, 1997, Sundbyberg, Sweden
Central Scouting Rankings (Prelim/Mid/Final): ”A“/ 1st Eur / 6th Eur
Notes: Tallied six goals and six assists in 35 combined games between Farjestad (SHL) and AIK of Sweden’s second division…Named to Sweden’s 2015 U20 World Junior Championship squad but missed the tournament after suffering an injury during an exhibition game… Became youngest player in SHL history to score a goal when at 16 years and four months old tallied the game winner in his debut for Farjestad….Did not register a point in five games at 2015 U18 World Championship…Had one assist in four games at the 2015 Five Nations Tournament…Had a goal and two assists in five games at the 2014 Ivan Hlinka Memorial Cup…Drafted by Avangard Omsk in the 3rd round (107th overall) in 2014 KHL Draft

There is a buildup of lingering doubt about whether the 2015 draft is as strong as previously advertised. Warranted or not, only two players — Connor McDavid and Jack Eichel — produced dominant wire-to-wire seasons to shred any sort of misgivings about them. The drop-off after the expected top two picks is significant for a reason; draft eligibles either limped down the stretch (literally or figuratively), or fought through periods of inconsistency. A year ago, the most sought-after players from this particular draft were almost as good as guaranteed to go early, with slick Swedish defenseman Oliver Kylington ensconced in the top five. But like most of his peers, too many bumps, bruises and periods of poor play has practically turned the first round into a real hard read. However, truly elite puck moving defensemen, which Kylington can possibly develop into, do not grow on trees. It’s the main reason why he is still part of a contingent of skilled blueliners who are expected to crack the top-30 come Draft Day. Kylington is a joy to watch when he is moving forward with the puck. Skating is his bread and butter, as he displays a smooth yet powerful stride. Kylington also possesses excellent lateral movement and does not require much of an effort to close and cover an opponent. He is very difficult to contain one-on-one, as he is quite adept at starting and stopping, and shifting gears. Kylington is also very smart on his pinches and at joining the rush, but it has certainly been a work in progress. His instincts have improved, and the time he spent between Farjestad and AIK paid dividends as he was far more confident, creative and responsible upon his return to junior. The situation at AIK was not ideal for any player, let alone a teenage star in the making. Their team issues compounded an inexperienced Kylington’s inability to produce there, so it made sense for him to leave.

His skills, however, are undeniable. From the back end,  Kylington is an outstanding passer and playmaker who makes hard, accurate passes both on his forehand and backhand. He has a good slap shot with a pretty big wind up, but he has the ability to wire a low, hard wrist shot with accuracy from great distances. While not classified as a physical defender, he is a well-conditioned specimen who has the stamina to play extended shifts. Kylington does not have the physical attributes nor the leadership abilities to become a franchise-type defender. Many compare his offensive skills to Erik Karlsson or even Scott Niedermayer — both of whom were similarly raw and devoid of defensive reliability when drafted. But his flash does not mean he thinks the game in the same manner as the aforementioned. He will likely be a very good player on a tandem pairing rather than a singular weapon who can carry a duo or power play by himself.