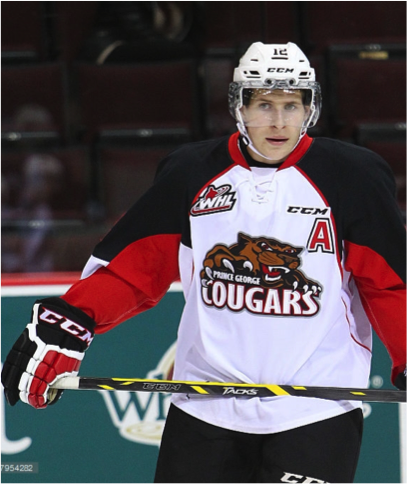 Position: Center
Shoots: Left
Height/Weight: 6’1 lbs 185 lbs
Born: May 23, 1997, Cleveland, OH
Central Scouting Rankings (Prelim/Mid/Final): ”A“/ 18th NA / 15th NA
Obtained: Drafted by Prince George Cougars in 1st round (2nd overall) in 2012 WHL Bantam Draft
Notes: Placed sixth in the WHL with 59 assists, a Prince George franchise record…Led team in assists and points (79), and was one of only four Cougars to finish season with a plus rating (+7)…Tallied five points (three goals, two assists) and was a +3 in seven games as Canada won bronze at the 2015 U18 World Championship…Collected two goals and four assists in five games to lead Canada to 2014 Ivan Hlinka Memorial Cup crown.

Players with NHL bloodlines can throw a wrench into an otherwise objective talent evaluation. Teams on the fence about a certain prospect have the option of looking towards things like intangibles and personal life to help them during decision making. What better than a kid who grew up in an NHL household with a dad who essentially would be an unpaid advisor for his entire career? Of course, sticking to that sort of rationale can be just as likely to end in folly. In Prince George center Jansen Harkins’ case, you get a sense that being raised by an NHL father has served him well. A highly cerebral and patient two-way center, Jansen, whose father Todd played parts of three NHL seasons in the early 1990s with the Calgary Flames and Hartford Whalers, is almost a lock to be a first round pick in the 2015 draft. He essentially carried Prince George’s offense after it was beset by graduations, producing a team-best 77 points — 10 more than the next highest Cougar and 25 more than the third. He has a tremendous understanding of the game on several critical levels; specifically playmaking, defensive zone coverage and backchecking. Harkins is deceptively dangerous with the puck; he is not a graceful player, nor will he wow you with slick moves or magical passes. He seems to do everything the right way: clean, safe, hard nosed and determined. Harkins is a leader on the ice who possesses a strong desire to win. He has excelled in physical, grind-it-out games by winning his puck battles and recovering loose pucks to set up scoring chances. If something good was cooking in Prince George’s offensive end, there was a good chance Harkins was involved in it – he finished tied for 6th in the entire WHL with 35 primary assists. Overall, he’s one of the top draft-eligible defensive forwards. The consistent offense he provides is simply the French butter cream on a gourmet cake. Even his U18 performance was solid – three goals and five points in seven games – despite being the third line center behind Mitchell Stephens and Mathew Barzal. His skating is above average, but his deliberation while controlling the puck on the rush should not be classified as an inability to beat his man up the ice. Rather, he’s controlling the situation and assessing how defenders and teammates are/should be positioned. That being said, he’s not going to wow you with speed or highlight-reel skill. Everything else he does, however, is done at an elite level.