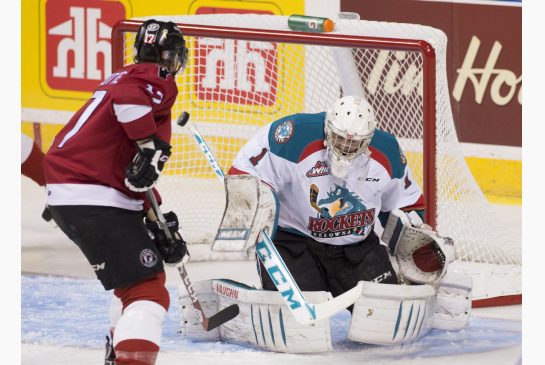 NEW YORK (The Draft Analyst) –The Quebec Remparts received three goals from their defensemen, including the go-ahead tally from Nikolas Brouillard early in the first period, as they held on to beat the Kelowna Rockets in the opening game of the 2015 Mastercard Memorial Cup, 4-3. Brouillard opened the scoring less than six minutes into the opening frame after he took a feed from Vladimir Tkachev and beat Kelowna goaltender Jackson Whistle over the shoulder. Defenseman Matt Murphy increased the lead to 2-0 with just over six minutes remaining in the second period after his shot from the point eluded Whistle. Kelowna got on the scoreboard with a shorthanded goal by Nick Merkley late in the 2nd, but Ryan Graves restored the Remparts’ two-goal lead early in the third with a shorthanded marker of his own. Rockets center Gage Quinney deflected Josh Morrisey’s point shot past Quebec netminder Zach Fucale midway through the third to make it 3-2, but Adam Erne sealed the victory for the Remparts with an empty-net goal. Leon Draisaitl closed out the scoring with a power play goal with under 40 seconds left in regulation but Quebec held on to claim its first victory of the tournament. Fucale stopped 26 of 29 shots for the win, and Whistle made 27 saves in defeat. Tkachev finished with two assists for the Remparts, who play the Oshawa Generals of the Ontario Hockey League on Sunday. Kelowna meets the Quebec Major Junior Hockey League champion Rimouski Oceanic on Monday night.