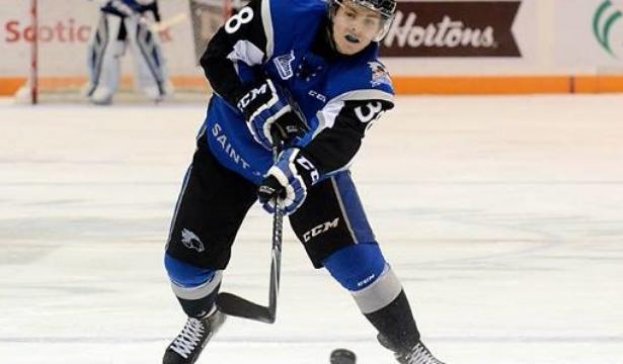 Position: Defenseman
Shoots: Left
Height/Weight: 6’0 183 lbs
Born: February 21, 1997, Brno, CZE
Central Scouting Rankings (Prelim/Mid/Final): ”A“/ 11th NA / 12th NA
Obtained: Selected by the Saint John Sea Dogs in the first round (fifth overall) in the 2014 CHL Import Draft
Notes: 2014-15: Named to QMJHL All-Rookie Team after leading all first-year defensemen in goals (13), power play goals (10) and placing second in points per game (0.75)…His 13 goals set a team record for goals in a season by a rookie blueliners…Named one of three finalists for QMJHL’s best pro prospect…Missed nearly two months and the CHL Top Prospects Game with a knee injury…Had a goal and an assist in three games for Czech National Team at 2015 U18 World Championship. 2013-14: Registered three assists in seven games at the 2014 U18 World Championship…Played for Brno of the Czech Republic’s junior league, where he tallied five goals and 16 assists in 36 games…Led all defensemen in goals with four in five games at 2014 Ivan Hlinka Memorial Cup…Drafted in the third round (37th overall) by the Omaha Lancers in the 2013 USHL Futures Draft…Selected in the third round (115th overall) by Lokomotiv Yaroslavl in the 2014 KHL Draft.

Too often critics put heavy stock into international tournaments and the subsequent player performances displayed. Sometimes it’s better to miss the tournament altogther and let scouts use league play to confirm or deny what they’re thinking. In the case of Saint John defenseman Jakub Zboril, being left off the Czech roster for the 2015 World Junior Championship was noteworthy more for what was clearly a political decision steeped in resentment over his move to the CHL rather than any sort of indictment on Zboril’s play. He had already dominated the Ivan Hlinka the previous season anyway, so any criticism for not playing at the WJC should be taken with a grain of salt. He’s a very talented defenseman who plays his position with decisiveness and confidence. Zboril is not a offensive defenseman in the classic sense, but he is an accurate passer from both forehand and backhand which can create a quick transition out of harm’s way. He possesses a very hard, accurate shot, but his ability to be smart and patient with it makes him an ideal option for the power play. Not one of the draft’s faster blueliners, Zboril is still a mobile skater in that he can find holes and attack them if passing lanes are clogged. He’s very strong on his feet and has very good balance, and he uses his size, reach and an active stick to fix opponents into low-scoring opportunities. All signs point towards Zboril possessing an NHL-caliber noggin, and while his projection is that of a dependable defenseman rather than an explosive points producer, the right system and enablers would likely result in gaudier numbers. Zboril can play with more snarl than you’d think and will take the opportunity to throw a shoulder into somebody. He is most certainly a first round talent who may slip due to the quality ahead and around him.